Employers beware: Generation Y loves social media, but only to a point

Employers beware: Generation Y loves social media, but only to a point 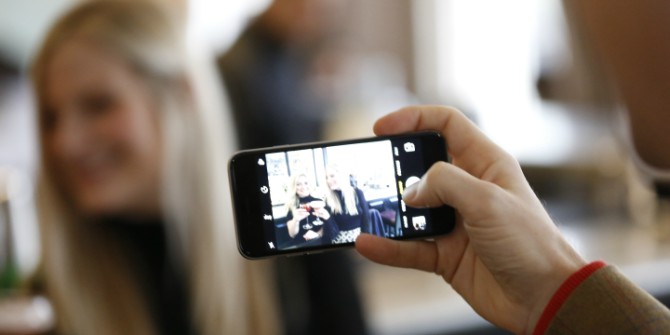 Social media is a ubiquitous feature of modern life inside and outside the workplace. Employers now recognise the benefit of using social networking sites for attracting, retaining and engaging employees (e.g. through encouraging communication and collaboration), especially members of generation Y, born from approximately 1980 to 2000. Although there has been debate about the distinctiveness of this generation’s work values, they have a particular relationship with technology, and social media is often integral to their lives.

Employer use of social networking sites remains legally and ethically controversial. There have been well publicised cases of firms dismissing employees for material posted on these sites. Debate rages over whether organisations are protecting themselves in such cases or invading employee privacy. As a recruitment tool, to attract job applicants, there is also concern over whether the use of social networking sites may lead to discrimination (e.g. against older workers).

Practically, there are concerns regarding organisations’ use of social networking sites, for example whether information gathered over these forums is sufficiently job-related for hiring decisions. The use of social networking sites by firms thus constitutes, to use Richard Edwards’ term, a ‘contested terrain’ with ample opportunity for conflict between employers and workers, with the associated potential for worker resistance.

Our study had three key objectives:

The study consisted of an online survey of 385 undergraduate business and management students studying in Scotland, who were currently or previously employed.

Respondents revealed various employer uses of social networking sites. These included encouraging social events outside work (37%), recruitment (32%), communication and collaboration (22/27%) and screening job candidates prior to hiring (21%). However, less than a third who were aware of employers screening applicant’s profiles prior to hiring reported that candidates had been made aware of this.

Twenty seven per cent reported that they had experienced employer disapproval of their social media activities, with a third of these formally disciplined. Few respondents reported that non-work related activities were subject to employer sanction. Formal discipline was most likely when employers disapproved of social media activities occurring during working hours, or when posts specifically mentioned the employer (for example someone had been disciplined for referring to herself as an ‘underpaid slave’ on Facebook). 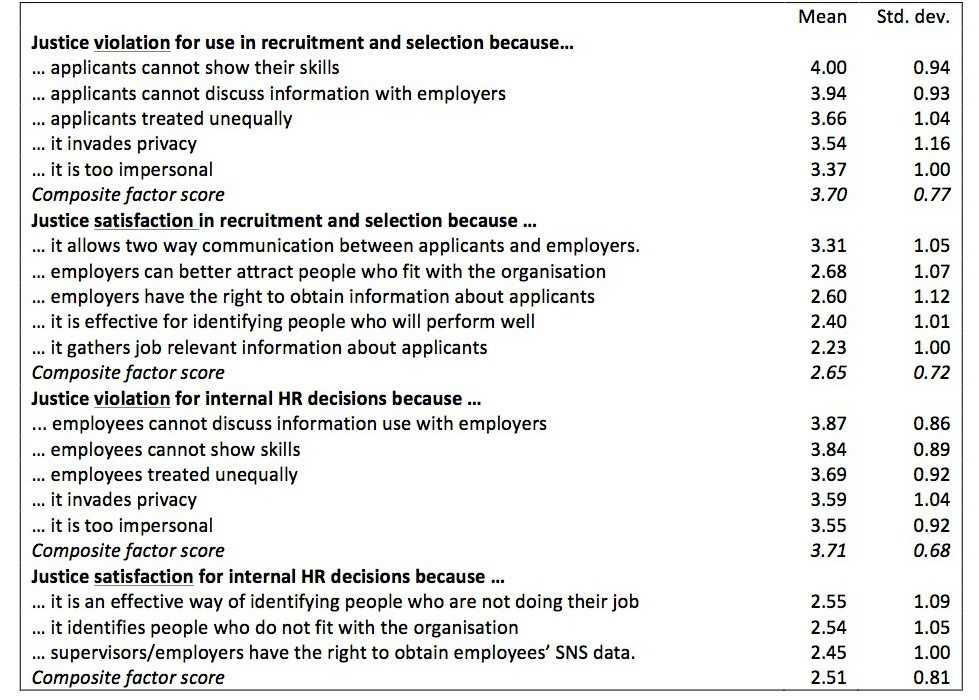 Note: Scores were measured on a scale from 1 (strongly disagree) to 5 (strongly agree)

The items shown in Table 1 were rated on a 1-5 agreement scale, and show higher perceived justice violation than satisfaction for each category of employer practice. Respondents thus tended towards a view that employer use of their social media data was unjust. Table 1 shows that respondents were especially concerned about the efficacy of using this data for workplace decisions, although they also had privacy and ethical concerns.

The single practice with the highest degree of satisfaction was the use of social networking sites to allow two-way communication during recruitment. Indeed, when examining recruitment and selection, the items with higher satisfaction were more related to the attraction stage of recruitment, whilst the items with higher violation were more relevant to the hiring stage — the process of selecting who from the shortlist was to be offered the job

Young workers appeared to respond to these perceptions of injustice. Over half reported managing their social media profiles with current (52%) or prospective (56%) employers in mind. Specific examples included grouping work and non-work friends separately on Facebook (e.g. so different privacy settings could be applied to different groups) and not ‘friending’ managers.

The results indicate that employers need to be careful about how they use job applicants’ and workers’ social networking site data, even with the technologically literate generation Y. The young workers here displayed a general cynicism towards employer practice in this sphere, despite popular conception of them as ‘digital natives’. Whilst there was little evidence of employers attempting to control current workers’ non-work online activities, they did, however, engage in activities that could elicit resistance such as covertly screening job applicants’ profiles.

The alertness shown by many of our sample in managing their online activities indicates an awareness of the potential for conflict, with active management of social media profiles somewhat reducing perceptions of injustice. The findings point to the need for employers to reflect on the ethicality of their social media practices (especially as legal guidance remains vague in many countries) and to engage in transparent behaviours which are perceived as fair by workers and job applicants.

If practices are perceived as unjust then employers may face reputational damage, as well as potentially basing decisions on erroneous information. One way for employers to do this, our data suggest, is to concentrate efforts on ‘work-purposed’ sites such as LinkedIn, especially for recruitment. Indeed attracting applicants during recruitment appears to be the most fruitful avenue for engaging young workers via social networking sites and should perhaps be employers’ focus, rather than using such data for internal HR purposes or to make hiring decisions.

Scott. A. Hurrell is Senior Lecturer in Human Resource Management and Organisational Behaviour in the Adam Smith Business School, University of Glasgow. Scott has a particular interest in labour market and skills issues, work organisation and the use of social media in the workplace. Scott has published in world leading academic journals, a number of edited book collections and has conducted research with a number of policy bodies.

Dora Scholarios is Professor of Work Psychology at University of Strathclyde Business School in Glasgow. Her recent research activity has focused on examining the implications of employer recruitment and selection practices for social mobility and graduates’ career transitions into quality employment. She is currently Co Editor-in-Chief of the Human Resource Management Journal.

James Richards is Associate Professor in Human Resource Management in the School of Social Sciences, Heriot-Watt University. James is generally interested in social injustices of the workplace, leading to research on a range of topics that include: employee misbehaviour and resistance through social media, managing hidden disabilities in the workplace, and, in-work poverty and marginal societal groups. James has published in a range of high quality academic journals and edited book collections, and produced a range of consultancy reports.