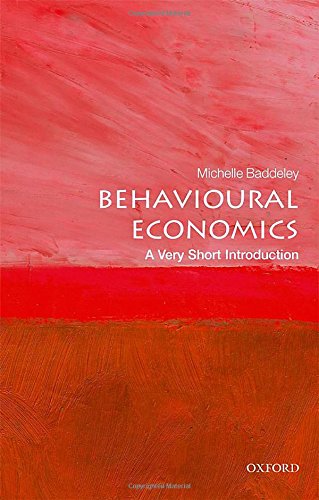 Homo economicus – the rational choice creature who has been at the core of economics for generations – seems to be a species in trouble, appearing to play the role of the Neanderthal to the homo praeiudicium – biased human –  of behavioural economics. Much like the homo sapien in Europe, homo praeiudicium seems poised to push its rival to extinction. At least, this is the impression one has for most of Michelle Baddeley’s new compact guide, Behavioural Economics: A Very Short Introduction.

This is not the first time that the extinction of homo economicus has appeared imminent. In the 1930s, Peter Druker warned of The End of Economic Man at the hands of totalitarians; in the late 1970s, Harvey Lubeinstein asked readers to look Beyond Economic Man with the rise of a deeper understanding of choice psychology; and, in the decades since, scores of academic and popular writing have asked for the same. Yet, homo economicus not only continues to exist, but actually thrives.

Perhaps somewhat strangely, Baddeley implicitly acknowledges this in her primer on behavioural economics. For most of the book, she uses ‘economics’ – left unmodified – to refer only to traditional, mainstream, rational choice models of decision-making. ‘Behaviour’ is used as a modifying adjective, suggesting a different or special type of economics. While this may be a helpful distinction for some readers, it serves to reinforce differences that the author also seems to want to avoid. There are problems, she argues, with traditional economics for which behavioural economics provides solutions. Somewhat paradoxically then, ‘behavioural economics’ is an addendum or bolt-on to traditional economics, yet is also out to supplant it in substantial ways.

The book’s main argument is spread across nine chapters. In the first, Baddeley begins to make the case that behavioural economics is an endeavour distinct from traditional economics: it is focused on different problems with different approaches and different types of experiments. Of all the chapters, this is perhaps the least substantial, moving through the material quickly – perhaps too quickly for a reader without a minimal background in economics or social science.

Subsequent chapters proceed more slowly, often lingering on key concepts or noteworthy experiments. Chapters Two and Three seek to explain the approach that behavioural economics takes to what motivates individual choice and how this is impacted by social influences. Chapter Three, for example, dedicates several thoughtful pages to the role that trust and fairness play in decision-making.

Baddeley fits her discussion of cognitive biases into the fourth chapter. It is here that she has her first sustained discussion of Amos Tversky and Daniel Kahneman’s work. Kahneman’s 2002 Nobel Prize and his subsequent popular writings helped to broaden the appeal of behavioural economics and have overwhelmed the popular discussion of the topic ever since. It is therefore refreshing that Baddeley waits until she is one-third of the way into her text before turning to these two intellectual titans. It is also worth noting that although she pays appropriate attention to both, Kahneman and Taversky by no means overwhelm the book, leaving the reader with the impression that they are two influential thinkers among many other important influences on behavioural economics.

Taken together, Chapters Four and Five present the perspective that behavioural economics has on the ways in which individuals assess risk. Here the author addresses important ideas such as prospect theory and mental accounting, which help to explain why individuals often take more risks for the opportunity to achieve potential gains and less risk when faced with potential losses. In all of these chapters, Baddeley does an admirable job weaving together theoretical concepts and experimental evidence and shows how behavioural economists move the discipline forwards.

The final two chapters turn more broadly to what we can do with the lessons of behavioural economics, addressing both macroeconomics and public policymaking. Up until this point, Baddeley seems to suggest that the behavioural approach to economics is a clear advance on the traditional perspective. The British Government’s Behavioural Insights Team – better known as the Nudge Unit – was responsible for finding opportunities to implement these lessons. However, the final thought Baddeley leaves us with is that a blended approach might be more fruitful in the end.

Overall, Behavioural Economics is a valuable addition to Oxford University Press’s Very Short Introduction series, being well-suited to an intelligent and curious reader with limited background in the area. Baddeley offers a broad range of concepts, thinkers, experiments and implications. The book made me curious: I found myself looking up more detailed explanations of key experiments as I moved across concepts and chapters. This is perhaps the biggest compliment of all.

Neanderthals once dominated Europe. Eventually homo sapiens supplanted their dominance and ushered them into extinction. However, their influence not only persists, but is literally intermingled with the DNA of homo sapiens. In the end, Baddeley also suggests that the best approaches might be blended ones. A wise reader is likely left with the impression that behavioural economics is an important addition to social science and that it has a wide and growing research programme. It is also engaged in a lively debate with homo economicus, which possesses its privileged position for being the first occupant of the territory. The rise of behavioural economics may not lead to the extinction of homo economicus, but it seems a challenge for dominance is afoot.