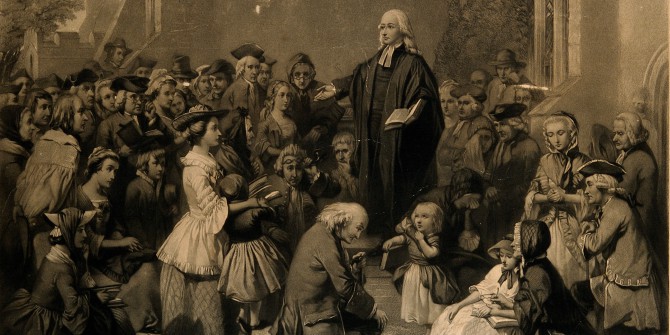 ‘Are our people good economists?’ the Methodist leader John Wesley asked his assembled preachers in 1765. He continued: ‘In public and private, enlarge on economy as a branch of religion.’

His efforts to spread the Gospel throughout the British Isles and beyond in the later eighteenth century relied on resources generated and managed using a wide range of techniques. The evangelistic energy and personal austerity of Methodist preachers and members was complemented by a distinctive organisational approach to financial management. There was a constant struggle between Methodists’ ambitions to recruit new members and expand their work, and the reality of the practical constraints faced by a movement with an increasing scale and range of activities, but a predominantly working-class membership and a fear of acquiring excessive debt.

Wesley’s Methodist ‘Connexion’ began on a small scale in the late 1730s, but by 1800 was a substantial operation, active throughout the British Isles and abroad, employing hundreds of staff and running hundreds of properties. It was a mass voluntary organisation, with no landed endowment and few wealthy patrons.

From the outset, therefore, its leaders thought carefully about what they called ‘temporal matters’, and they acted frequently to try to ensure that their evangelical and other activities remained affordable, perhaps fearful of repeating the mistakes which led to the spectacular financial collapse of the Moravian Brethren in 1753. At every level, lay stewards and other officials, sometimes substantial businesspeople in their own right, supported the spiritual leadership in trying to keep the Connexion within budget and managing its accumulating debts.

The Connexion’s central priority was to supply enough preachers to meet the needs of the membership and attract new converts. The modest obligatory members’ dues provided the core financing for the growing cadre of travelling preachers, while tools such as central grants channelled resources from richer to poorer areas. Although the increasing number of married preachers with children raised per capita costs, the annual preachers’ Conference tried to keep the deployment of preachers within the envelope of the resources available. By 1800 preaching costs probably exceeded £40,000 a year (the equivalent of around £40 million today*), met by some 110,000 members.

A second preoccupation was the capital and revenue funding of the expanding network of Wesleyan chapels, which numbered almost 1,000 by 1800, costing perhaps £9,000 (some £9 million today*) in annual debt interest alone. From the 1760s, increasing use was made of an essentially commercial model, overseen by a central committee of business advisers. Loans at attractive interest rates were offered to wealthier members and supporters, and these both financed chapel construction and offered a good home for their surplus funds. Interest costs were met by renting out seats in chapel, though some seats were always made available free to the poor. Chapels also enabled the Connexion to draw in voluntary financial contributions from non-members, who typically outnumbered members by three to one in congregations. Proposals for new chapels were reviewed annually by the Wesleyan Conference, and although many were built without its approval, the resulting pressure on the movement’s finances became marked only after 1800.

Third, Wesleyan Methodists sought also to spread the Gospel through the publication and distribution of cheap and readable publications, including Charles Wesley’s hymnals. From the 1750s the so-called Book Room became increasingly profitable, primarily because by 1780 it had largely withdrawn from the commercial book trade and brought most aspects of production and distribution in-house. In particular, Wesleyan preachers were exhorted to market the publications to their members and congregations, and received 10 per cent commission on sales. By 1800 the Book Room’s annual profits—typically approaching £2,000 or £2 million today—were making a significant contribution to overall Connexional finances.

Fourth, the Connexion developed a portfolio of other activities, including educational services such as Sunday schools, poor relief programmes, and overseas missions, especially in the West Indies. Most of these activities were not financed directly by the membership. A key approach was to appeal for public subscriptions, which were widely used outside Methodism to fund public buildings and services such as hospitals, but there were many variations. In the West Indies, for example, some Wesleyan missionaries supplied spiritual services to slave-owners under contract.

In response to growing financial pressures, the Wesleyan Methodist leadership resorted to a wide range of financial expedients, including forced loans from the preachers’ pension fund and deferred payment of their pensions. And overall the movement became increasingly dependent on its richer members and supporters. For example, though its areas of greatest membership strength were Yorkshire and the South West of England, subscription income came disproportionately from wealthy London.

However, until well into the nineteenth century, this seems not to have blunted its expansion: membership almost doubled between 1800 and 1820. Indeed, the complex and flexible financial policies and practices which underpinned the movement were crucially important in enabling it to respond to the spiritual and (to an extent) material needs of Britain’s growing and geographically shifting population during the Industrial Revolution.

*Estimates of today’s equivalents of financial estimates use the average earnings comparators at MeasuringWorth.com.

Clive M. Norris is is a Research Associate at the Oxford Centre for Methodism and Church History, Oxford Brookes University. He is a historian and management accountant, and can be contacted at cnorris@brookes.ac.uk. His book The financing of John Wesley’s Methodism, c.1740-1800 was published by Oxford University Press earlier this year.