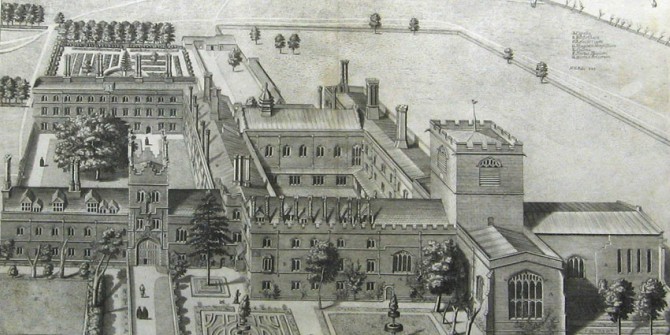 Contemporary businesses are frequently challenged to invest the profits from their commercial successes into projects that benefit society. Yet the idea that the pursuit of international competitiveness should also promote the common good is not a new one. It began as early as the medieval period!

England in the late thirteenth century had a dynamic economy. Legal advances created a lively property market and commodity trade; cutting-edge technologies improved water management and bridge-building; and towns grew dramatically, both in number and size. The period from c.1200 to c.1350 is now recognised as a period of commercial growth that was as significant as the later Industrial Revolution.

However thirteenth-century expansion was not based on individualistic capitalism. Family bonds and community loyalty were strong. Successful entrepreneurs used their new-found wealth to support their local community. They invested in new infrastructure to improve transport links and security and financed hospitals to care for the poor and infirm.

Using recently discovered documents on medieval Cambridge we have investigated how money was made through property speculation and how the profits of successful speculation were spent. Our analysis is based on over one thousand properties recorded in the so-called ‘Second Domesday’ – the Hundred Rolls of 1279.

Property markets developed in medieval England when burgage plots were laid out in new or expanding towns by local landowners (‘lords’), with the king’s permission. To acquire a plot a burgess had to pay a perpetual rent and erect a building conforming to local plans. He could bequeath or sell his plot. Capital gains could be taken as lump sum payments or as an additional perpetual rent paid to the seller. Plots returned to the rent-recipient (e.g. the lord) if rent was not paid.

Cambridge in the thirteenth-century was not yet a famous university town, but rather an inland port whose merchants specialised in wholesale agricultural trade. The town had origins dating from at least the 10th century, and in 1068 a castle was constructed there, followed by three religious houses in c. 1092, c. 1133 and c. 1203. The River Cam provided a navigable network of waterways to Ely, Peterborough and Huntingdon, and to ports at Wisbech and Lynn. At the time of the Hundred Rolls visitors from London would enter through the Trumpington Gate, with the King’s Mill to the left and the King’s Ditch on the right. Heading north, the visitor would enter the business district, with the market to the right, just behind Great St. Mary’s church – one of fourteen churches in the town. On the left would be buildings later demolished to make way for King’s College Chapel.

Continuing up the High Street past the Jewry would bring the visitor to the Round Church. On the left would be Hospital of St. John the Evangelist, later re-founded as St John’s College. Continuing to the Great Bridge (now Magdalene Bridge) the visitor would pass St. Clement’s church, through the area where the wealthiest people resided. Passing over the bridge they could look up the River Cam to the great stone house (now called the School of Pythagoras) where the influential Dunning family lived. The visitor would then ascend the Huntingdon road, with the Castle (now a mound near Shire Hall) to the right and views over the grounds of St. Radegund’s Nunnery (now Jesus College) towards Barnwell priory. A walk up the Newmarket Road would led to hospital of St Mary Magdalene with its chapel (still standing today), and the site of Stourbridge Fair.

Property was a desirable asset in medieval Cambridge, much as it is today! Medieval speculators invested in a variety of properties (Figure 1). Land was popular, including fields, curtilages (the area of land around a building), vacant urban land and crofts (land adjoining dwellings, often used for agricultural purposes). Buildings were also valued assets, both residential (messuages – houses with land and often outbuildings – and houses) and commercial premises (shops and stalls – usually temporary structures in marketplaces). Statistical analysis of the levels of rent shows that messuages and shops were the most valuable properties. 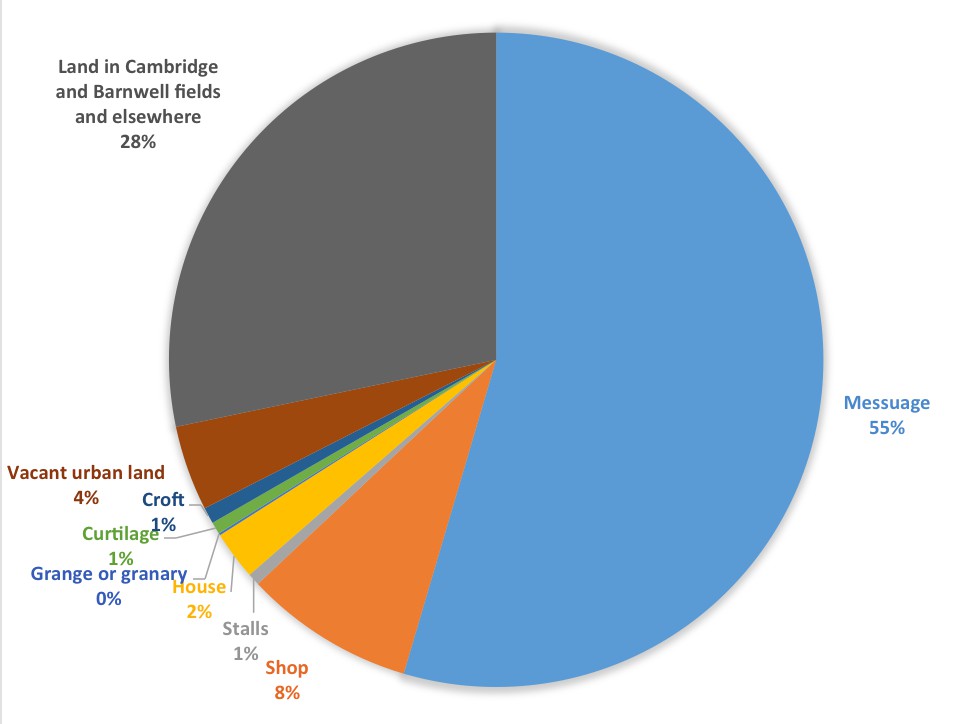 Property hot-spots with high-rents can be identified in three parts of medieval Cambridge: at the road junction by the Hospital; west of the market; and near the river just south of the Hospital (Figure 2). Areas of notably low rents were near the castle, the area of Trumpington Street and the suburb of Barnwell. 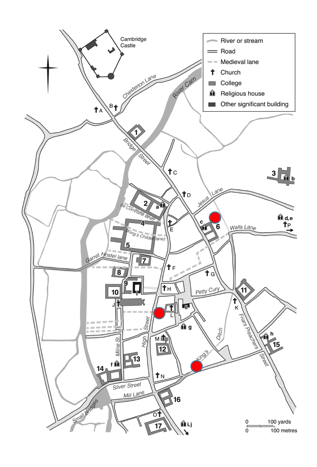 Individuals and institutions both owned property (Figure 3). Family bonds often underpinned ownership. Cambridge was home to several families who had acquired property through the military service of their Norman ancestors, including the Dunning family who owned 12 plots in 1279. Property was passed down through generations. The Wombe family benefitted in 1279 from a portfolio amassed by an ancestor. The commercial revolution posed some challenges for this ‘old money’. The Dunnings mismanaged their assets and eventually left Cambridge. 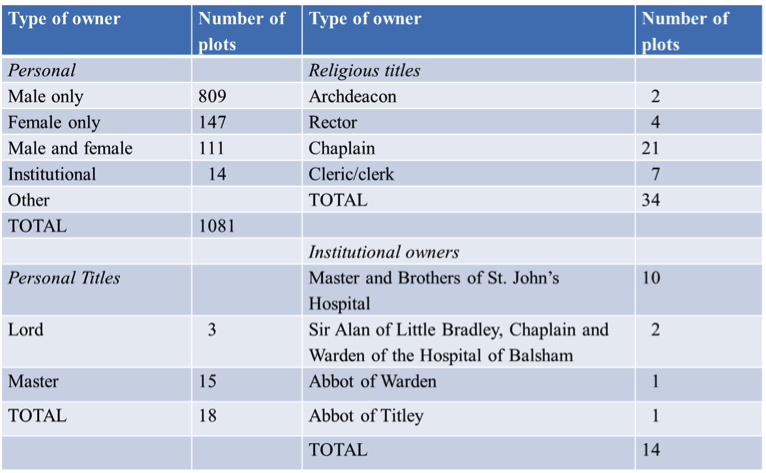 Profits from the property market were recycled back into the community through donations to religious houses, hospitals and churches. Owners allocated more rental income to charitable giving (51 %) than to private individuals (Figure 4). The Barton family, for example, were important patrons of The Crutched Friars and the Nuns of St. Radegunds while the Dunnings gave land to Barnwell Priory, the Hospital of St. John and St Radegunds. 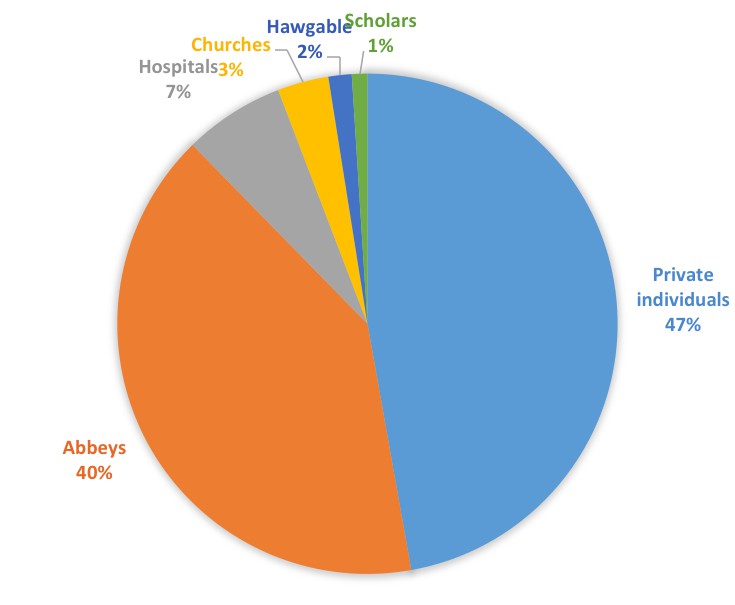 Profits from property speculation benefitted individuals, family dynasties and the urban community as a whole. Compassionate capitalism involved high levels of charitable giving to hospitals, monasteries, churches and colleges which helped disseminate the economic benefits of the ‘winners’ of the commercial revolution.

This self-sustaining system was, however, challenged in the 1340s by the Black Death, the Hundred Years War and punitive levels of urban taxation. When prosperity returned in the Tudor period a more ruthless form of capitalism took root, whose legacy remains with us today.

Catherine Casson is a Lecturer in Enterprise in the Manchester Enterprise Centre, part of the Innovation Management and Policy Division of Alliance Manchester Business School, University of Manchester. She is a medieval historian by training and her publications include a co-authored book with Mark Casson on The Entrepreneur in History: From Medieval Merchant to Modern Business Leader – Basingstoke: Palgrave Macmillan (2013) – and articles in Urban History, Business History and the Economic History Review.

John Lee is a Research Associate at the Centre for Medieval Studies at the University of York. He has published Cambridge and its Economic Region, 1450-1560 (University of Hertfordshire Press, 2005) and other studies on local and regional markets and trade.

Katie Phillips is an Arts and Humanities Research Council-funded PhD student in Medieval Studies at the University of Reading. Her thesis, The Leper and the King: the Patronage and Perception of Leprosy by King Henry III of England and King Louis IX of France, is due to be submitted in 2017. This work follows on from the dissertation produced for her MA(Res), an edited version of which has been published as ‘The Hospital of St Mary Magdalene – The Leper-House at Reading Abbey’, Berkshire Archaeological Journal, (81), 2003, 87-93. Katie is also the author of another published article in an online peer-reviewed journal, ‘Saint Louis, Saint Francis and the Leprous Monk at Royaumont’, The Reading Medievalist, (2), 2015