Without an agreed legal definition of protectionism, we can’t measure it

Without an agreed legal definition of protectionism, we can’t measure it 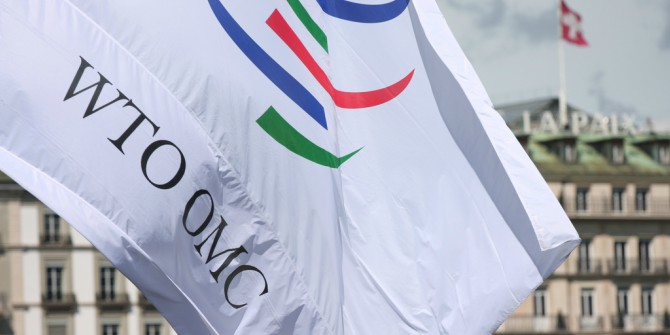 One word was conspicuous by its absence in the communiques on trade that came out of three meetings this year of the world’s finance chiefs. The G20 finance ministers, the International Monetary and Financial Committee and the G7 finance ministers all used the same sentence when it came to trade: “We are working to strengthen the contribution of trade to our economies”.

When it came to opposing protectionism, or upholding a rule-based trading system, however – there was silence. We have never seen such economy with words in respect to protectionism in the history of the G20. At its Pittsburgh Summit in 2009, the group’s leaders declared that a “responsibility to reject protectionism in all its forms” was one of their “core values”.

In the forthcoming G20 Leaders’ summit in Hamburg, however, the subject of protectionism may once again play a major role. The G20 leaders may wish to give more careful attention to guarding an open and rule-based global trade and investment order, without which no one would be a winner. Let’s be clear: throwing away the language of opposing protectionism is not necessarily a problem per se. In a pre-Davos blog early this year, I had actually suggested that using the language of rejecting protectionism in all its forms is legally inaccurate and politically misleading.

From the legal perspective, there is no agreed definition of what protectionism actually is. Does protectionism mean only illegal trade-restrictive measures, or does it refer to both legal and illegal measures as long as they restrict trade in a way that discriminates against foreign competitors? As a European Parliament study in 2015 put it: “Although it is widely recognised that protectionism can take many different forms, there is no common agreement on what precise measures should be considered as protectionist.”

Without an agreed, clear definition of protectionism, the research findings from organizations who monitor trade are of questionable value. The World Trade Organization’s (WTO) Trade Monitoring Database mainly captures trade-restrictive border measures including trade remedies such as anti-dumping, countervailing and safeguard measures, but they are not in a position to evaluate whether these measures are legitimate or illegitimate according to each member’s domestic law and their international obligations.

The Organisation for Economic Co-operation and Development (OECD) and the United Nations Conference on Trade and Development (UNCTAD) monitor investment-related measures, but they do not conduct detailed analysis on whether or not these policies are used to achieve legitimate objectives in a legitimate manner.

Global Trade Alert (GTA), an independent monitoring initiative, adopts a relative treatment standard – that is, it includes in its reviews all information on announced or implemented state measures that could alter the relative treatment of domestic commercial interests vis–à-vis the foreign rivals with which they compete. GTA’s ambition and academic analysis is admirable, but their aim to build a perfect, free-competition market at the global scale could only exist without any government intervention at all.

And so because there is no commonly agreed legal definition of what protectionism actually is, it is not possible to measure it – which means that the G20’s commitment against protectionism has been more rhetoric than action. In addition, the G20’s opposition to “protectionism in all its forms” is not only politically misleading, it has backfired. The general public, in particular those who feel worse off in the wake of free trade, get cross easily: “What? We surrender our national sovereignty and give up our ability to PROTECT ourselves?”

These complaints are not just in my imagination. They are at the core of the political dynamics that drove Donald Trump to the White House last year, and which have taken the upper hand in public opinion about trade in many places around the globe. That is probably why the Trump administration’s 2017 trade policy agenda prioritised “defending our national sovereignty over trade policy” as a response to the populous cry against the global trade regime that many voters have blamed for eroding US national sovereignty.

The argument that being part of global trade institutions means losing national sovereignty and necessary protections is obviously a misunderstanding, and furthermore it is one which is exacerbated by undefined rhetoric around “opposing protectionism”. The WTO is not a supra-national agency that is superior to any governments of its members. All members, including the US, are contracting parties who have agreed on a basket of rights, obligations and rules for the sake of their own commercial and political interests. The WTO is only a secretariat that supports all contracting parties in implementing their contracts and settling their disputes.

A silver lining emerged when G7 leaders met at their Taormina Summit at the end of last month. Leaders pledged to keep their markets open and to fight protectionism, to stand firm against all unfair trade practices, to push for the removal of all trade-distorting practices, to recognize the importance of the rule-based international trade system, and to strive for better application and promotion of international standards. Emphasis has been put on the importance of the rule-based international trading system, which is of particular importance under today’s circumstances.

Against this backdrop, how can the G20 leaders take a further step in order to ensure an open global trading environment?

Firstly, the G20 leaders could reaffirm a commitment to uphold the rule of law in the global economy, with a view to advancing free and fair trade and fighting against any abuse of legitimate trade-restrictive measures. These words make more sense than the legally inaccurate, politically misleading language of opposing or fighting against protectionism. The rule of law should remain the fundamental principle of conducting international business – that is, it should be conducted according to existing contractual laws between contracting governments, without resorting to any illegal measures. Free and fair trade is both the goal and the belief that this is the only way to enjoy balanced trade with economic efficiency and moral equity. The opposition to the abuse of using protective measures, on the one hand, safeguards members’ legitimate rights to take certain protective measures according to the agreed rules, while on the other hand it discourages members from any improper or excessive use of those protecting measures, even if they are legitimate.

Secondly, leaders may wish to ask their ministers to amend old rules or craft new ones. Given the emergence of new economies, technological evolution, alarming risks of the tragedy of the commons, and new electoral and political dynamics, existing rules might need to be further clarified or updated. Leaders can highlight a few substantial areas if they can find shared interests in any areas, such as trade and investment nexuses, trade’s role in achieving sustainable development goals, the digital economy, development, standards, or climate change. Leaders can urge their negotiators to use the WTO and other international for a more actively via consultations and negotiations, and to find solutions by signing new multilateral or plurilateral agreements.

Thirdly, the G20’s leaders may wish to suggest that next year’s chair, Argentina, hosts a trade ministers’ meeting. It seems a pity that under Germany’s 2017 stewardship the trade ministers of the G20 economies did not have a chance to meet and discuss the complexities surrounding protectionism. A meeting of trade ministers next year could hopefully not only guide the G20 Trade and Investment Working Group’s work, but could also consolidate some meaningful policy options for leaders to discuss and consider. Furthermore, a trade ministers’ meeting could play an active role in bridging the group’s trade and investment track with other finance and growth tracks.

And finally, the G20 leaders at Hamburg can collectively cultivate a review and peer-learning process about domestic solidarity policies that address the pains caused by trade to certain segments of the population. Addressing such pains is about domestic and community solidarity, and requires local solutions in most cases, but the G20 can be a global platform to enhance knowledge sharing and mutual learning. Such social policies can include a wide range of trade adjustment assistance programmes for workers such as wage insurance, subsidies for and portability of medical insurance, reemployment services such as training and assistance with geographic relocation. It may include certain assistance to firms and farmers. Solidarity is something that should be protected.

The author and activist Gloria Steinem once said: “The more you tell your story, your dreams and your entrepreneurial hopes, the more you will see you are not alone in either your striving or your doubts.” I do have strong doubts about the G20’s opposition to undefined protectionism, and I hope leaders at the G20’s Hamburg summit in July this year can put both the rule and the spirit of law as well as solidarity at the centre of their talks in order to safeguard an open, predictable and equitable environment for international commerce.

Shuaihua ‘Wallace’ Cheng is the Managing Director of Global Economic Governance Initiatives at the International Centre for Trade and Sustainable Development (ICTSD); and a member of ICTSD Operation, Programme and Strategy Board. Currently, he co-manages the World Trade Organisation’s Post-Nairobi Programme, and China, G20 and Global Economic Governance, New Industrial Policy Group, the E15 Initiative in partnership with the World Economic Forum. Dr Cheng is also Adjunct Professor at the University of International Business and Economics (Beijing), Associate Editor of the Advances in Climate Change Research Journal published by the China National Climate Change Centre (Beijing). He is a member of the Asia Society’s Asia 21 Advisory Committee (New York), and of the Evian Working Group on Trade (Lausanne). Before joining ICTSD, he was an economist at the Shanghai Municipal Government Development Research Centre and the Board Secretary of the Shanghai WTO Affairs Consultation Center. Dr Cheng is Yale World Fellow (2015), Asia 21 Young Leader (2007), British Chevening Scholar (2005), Salzburg Seminar Fellow (2000).