‘Flash Crash’: The first market crash in the era of algorithms and automated trading

‘Flash Crash’: The first market crash in the era of algorithms and automated trading 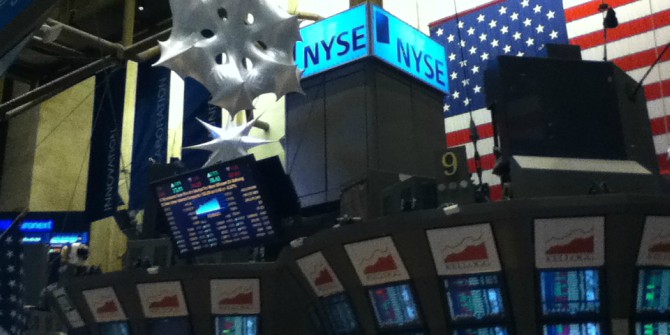 On 6 May 2010, US financial markets experienced a systemic intraday event that has come to be known as the “Flash Crash.”[i] The large and temporary decline in prices and the corresponding increase in trading volume in the S&P 500 E-mini Futures on 6 May is depicted in the figure below. During this extreme volatility event, which took about thirty minutes, volume increased and prices declined before they recovered to their pre-drop levels. 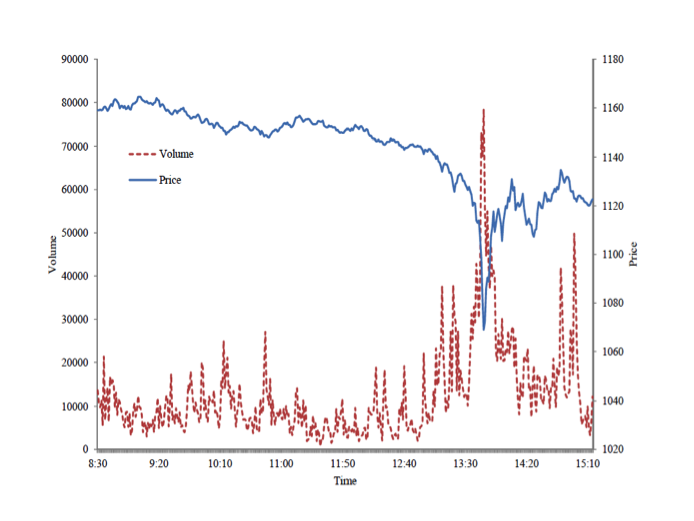 In our recent publication, we parse second-by-second trading in the bellwether E-mini S&P 500 futures market before and during the “Flash Crash” of 6 May 2010, shedding light on the previously unseen ecosystem of algorithmic trading and the first market crash in the era of automated trading. In our article, we investigate the responses of intraday intermediaries to this large and temporary selling pressure. The automation of financial markets has transformed the way financial assets trade.

Electronic trading platforms have spurred increased use of automated trading strategies by different types of participants, including market intermediaries. While market participants without formal market making designations have increasingly provided the function of intermediation, intermediation remains an essential function in markets where buyer and sellers do not arrive simultaneously. The fully automated E-mini S&P 500 futures market—a market with no designated intermediaries—provides a laboratory for examining the responses of non-designated intraday intermediaries during a period of large and temporary selling pressure.

Using a novel, data-driven trader classification approach, we catalog trading accounts based on how they trade. Guided by the literature on the inventory management of intermediaries, we classify accounts into categories such as high-frequency traders (HFTs) and market makers in order to examine their responses to the large and temporary selling pressure observed on 6 May.

Theory suggests that market crashes can occur if there are large and temporary selling pressures. If a small imbalance exists, then intermediaries are supposed to provide liquidity to smooth the imbalance. However, market makers have limited risk-bearing capacity. If this capacity is overwhelmed, then liquidity crashes can occur, resulting in wild fluctuations in prices in the absence of important news about fundamentals.

In our research, we conclude that the behaviour of non-designated intraday intermediaries is consistent with the theory of limited risk-bearing capacity: they did not take on large risky inventories relative to the large and temporary selling pressure on 6 May. Furthermore, our results suggest that the most active intraday intermediaries, HFTs, are not simply the electronic version of traditional market makers. They exhibit high-frequency market timing. They buy before market prices increase and sell before market prices decrease; this behaviour is not consistent with traditional market making.

For a period, the “Flash Crash” seemed like an isolated event. However, the “Flash Rally” in the U.S. Treasury markets on 15 October 2014 reignited discussion about the vulnerability of liquid automated markets to severe dislocations and disruptive trading. Our empirical approach provides a framework for studying intraday market dynamics before and during such systemic events and highlights the need to design mechanisms in order to stop future crashes before they occur.

[i] This event is described in detail in the Commodity Futures Trading Commission– Securities Exchange Commission (CFTC-SEC (2010)) joint report: “At 2:32 [CT] p.m., against [a] backdrop of unusually high volatility and thinning liquidity, a large fundamental trader (a mutual fund complex) initiated a sell program to sell a total of 75,000 E-mini [S&P 500 futures] contracts (valued at approximately $4.1 billion) as a hedge to an existing equity position. [ . . . ] This large fundamental trader chose to execute this sell program via an automated execution algorithm (“Sell Algorithm”) that was programmed to feed orders into the June 2010 E-mini market to target an execution rate set to 9% of the trading volume calculated over the previous minute, but without regard to price or time. The execution of this sell program resulted in the largest net change in daily position of any trader in the E-mini since the beginning of the year (from January 1, 2010 through May 6, 2010). [ . . . ] Securities, including many ETFs, were executed at prices 60% or more away from their 2:40 p.m. prices. [ . . . ] By 3:08 p.m., [ . . . ] the E-mini prices [were] back to nearly their pre-drop level [ . . . and] most securities had reverted back to trading at prices reflecting true consensus values.”

The analyses and conclusions expressed in this blog post are those of the authors and do not necessarily reflect the views of the Federal Reserve Board, Federal Reserve System, their staff, the members of the Office of the CFTC Chief Economist, other CFTC staff, or the CFTC itself.

Andrei Kirilenko is the Director of the Centre for Global Finance and Technology at the Imperial College Business School. Prior to joining Imperial in August 2015, he was Professor of the Practice of Finance at the MIT Sloan School of Management and Co-Director of the MIT Center for Finance and Policy. Professor Kirilenko’s work focuses on the intersection of finance, technology and regulation. He is a recognised world expert on technology in markets, including algorithmic and high frequency trading. He is also an intellectual leader on the principles of regulation of automated financial markets. Before MIT Sloan, Professor Kirilenko served as Chief Economist of the U.S. Commodity Futures Trading Commission (CFTC). Prior to joining the CFTC, Kirilenko spent twelve years at the International Monetary Fund working on global capital markets issues.

Albert Kyle is the Charles E. Smith Chair Professor of Finance at the University of Maryland’s Robert H. Smith School of Business.  He earned is B.S. degree in mathematics from Davidson College (summa cum laude, 1974), studied philosophy and economics at Oxford University as a Rhodes Scholar from Texas (Merton College, 1974-1976, and Nuffield College, 1976-1977), and completed his Ph.D. in economics at the University of Chicago in 1981.  He has been a professor at Princeton University (1981-1987), the University of California Berkeley (1987-1992), and Duke University (1992-2006).  Kyle’s research focuses on market microstructure, including topics such as high frequency trading, informed speculative trading, market manipulation, price volatility, the informational content of market prices, market liquidity, and contagion. He was a staff member of the Presidential Task Force on Market Mechanisms (Brady Commission, 1987), a consultant to the SEC (Office of Inspector General), CFTC, and U.S. Department of Justice, a member of NASDAQ’s economic advisory board (2004-2007), a member of the FINRA economic advisory board (2010-2014), and a member of the CFTC’s Technology Advisory Committee (2010-2012).

Mehrdad Samadi is Assistant Professor in Finance at Southern Methodist University’s Cox School of Business. Professor Samadi’s research interests include financial economics and market design. His award-winning research has been published in the Journal of Finance and has been mentioned in The Wall Street Journal, Financial Times, Reuters, and Barron’s. He has consulted for regulatory agencies on market structure issues such as the Commodity Futures Trading Commission (CFTC) and the Financial Industry Regulatory Authority (FINRA) and served as a Dissertation Fellow with the Federal Reserve Board. Prior to his academic career, he worked as a Summer Analyst at Natixis Corporate and Investment Bank and served as an Economist with the CFTC.

Tugkan Tuzun is a Senior Economist at the Capital Markets Section of the Federal Reserve Board. He was previously a research associate with the US Commodity Futures Trading Commission