The readers, and the general public, are not getting the full story, writes Katie Hind 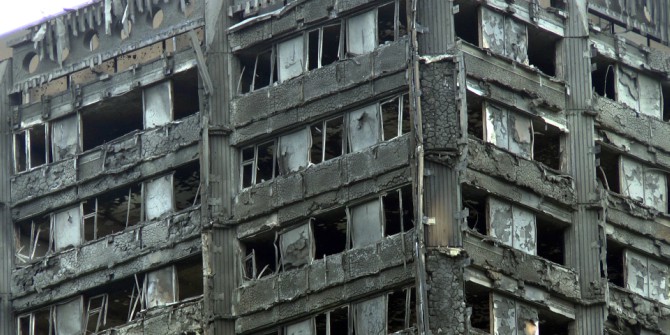 They are words I’ve heard several times in my career, whenever I deviate from my usual beat of writing about celebrities, but this time it was much more memorable.

“What’s that f-ing showbiz girl doing down here?”, I overheard a male news reporter from a rival newspaper say. I was at Grenfell Tower in the aftermath of the terrible inferno, standing with a mother who had lost her daughter in the fire. It was just hours after the tragedy.

What I suspect bothered him more was what on earth a woman was doing covering such a story – because there were very few of us there.

The mother I was standing with was a friend from my gym. Working as an overnight cleaner, she had been forced to leave her 12-year-old daughter alone in her 20th floor flat while she worked to pay her mortgage. Sadly, the girl was later identified. She had died while trying to escape.

I spent three very long days with this woman as she searched high and low for her little girl. As I did so, I barely came into contact with any other female journalists, instead, on the ground were clusters of male reporters – all looking the same, and all looking for the same stories. They wanted to know about the cladding, the riots, the politics behind the story.

What they weren’t looking for were the human stories, the tragic accounts of those who had lost their loved ones, and the heart-warming stories of the heroes in the local community. Frankly, I was stunned that no other journalist tried to nab my woman from me, but these types of stories are not on their agenda. They want to do the ‘blokey stuff.’

Which is why there is an issue with women not being given the opportunity to cover big news stories – the readers, and the general public, are not getting the full story. It would be fair to say I wouldn’t have been there if I hadn’t known the mother. I was though, sent my my boss at the Mail on Sunday and a double-page interview with the heartbroken woman, Adriana Ramirez, appeared in the paper that weekend.

While I was researching the newspapers for Women in Journalism’s report, what struck me most was the lack of female front page bylines on the three big stories which were ongoing in June and July, throughout the project – the General Election, the London Bridge terror attack, and Grenfell.

As our report reveals, news desks are run by men, with the exception of three of the national newspapers we studied. Backbenches – where the front pages are put together – are headed up by males apart from at one publication, and we still have just three female national newspaper editors – at the Guardian, the Daily Star and the Sun on Sunday. With statistics like this, there is still such a long way to go until we reach equality. All the time this is the case, attitudes that led to last year’s story involving a man murdering his girlfriend being headlined “the tycoon and the escort”, will continue.

I’ve grown up in newspapers with the idea that “news is for men, features are for women.” It has been said to me many times during my 14-year career on Fleet Street. It is something I refused to allow to happen to me and I was appointed to work on the news desk by my former editor, Lloyd Embley, when I worked at the Sunday People. It was a progressive move by him, and one that worked tremendously. Having a woman around most definitely changed the dynamic, but most importantly, it added that female voice – the woman’s touch – whatever you want to call it.

With the notable exception of the Financial Times, 80 per cent of whose readers are men, industry figures indicate that national print newspaper readership is split roughly 60:40 male to female, with the Daily Mail being the only title that has more female readers (52.5:47.5). Unfortunately, in 2017, this is yet to be reflected in our newsrooms.

Katie Hind is a showbusiness writer at the Mail on Sunday, and a member of Women in Journalism UK.