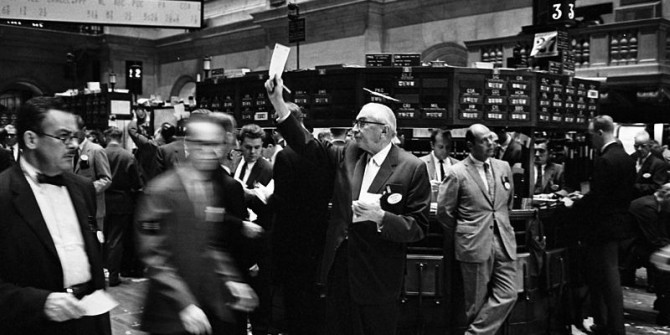 Society could save billions of dollars every day if trading in commodities, energy and securities was made more competitive and efficient through a minor rule change. That is the topic of my new research paper.

Every day, auctions and exchanges around the world trade bonds, stocks, currencies, electricity, metals, commodities, securities and financial instruments worth trillions of dollars. Thus even small changes in transaction prices could save a lot of money for society and tax payers.

Some exchanges give priority to the order that was submitted first. Other exchanges might prioritise an order with a large volume over a small order with the same offer price, or the other way around. Many multi-unit auctions ration offers with identical offer prices proportionally.

If the auction uses uniform-pricing, as in many electricity markets and in the security auctions by the US treasury, then the price for each transaction is £105. Treasuries in Europe often use discriminatory pricing, and in that case Supplier A and B are paid a lower price, £100, for the units that they have offered to sell at £100.

In a market with imperfect competition, it is profitable for suppliers to overstate their costs in their offers in order to boost the transaction price. In such cases the new rationing rule will make bidding more competitive. In the example above, it would increase the supply at £100. How much supply increases depends on the number of suppliers, their costs, uncertainties in the market and how much rationing is needed. Nevertheless, as qualitatively illustrated in the figure below increased supply could reduce the marginal price and thereby the procurement cost of the auctioneer.

Figure 1. Example that qualitatively illustrates how total supply of securities depends on the rationing rule, pro-rata and pro-competitive rationing 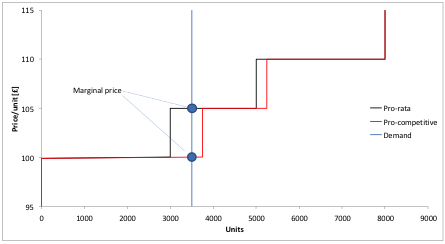 The pro-competitive effect is largest in markets such as security exchanges, where orders are entered at just a few price levels, so that rationing becomes important. The paper shows that if orders are only entered at two price levels, then the new rationing rule could have the same effect as if the number of traders was doubled, thereby increasing the competition and forcing the trade to be conducted more efficiently.

In a procurement auction where sell orders are entered at 10 different price levels with a mark-up of around 10 per cent, the procurement price can be reduced by roughly 1 per cent – leading to huge savings on large contracts. This means that government bodies that carry out procurement auctions or sell emission permits or treasury bills would save billions in tax payers’ money.

I have developed the new trading rule at the Research Institute of Industrial Economics (IFN) in Stockholm with the help of David Newbery and Daniel Ralph at University of Cambridge and Lawrence Ausubel at University of Maryland. The cost to implement the new pro-competitive rule would be negligible compared to the savings, when the turnover is high.

Pär Holmberg is Associate Professor in Economics and has a Ph.D. in Electric Power Engineering. He is a Senior Research Fellow of the Research Institute of Industrial Economics (IFN) in Stockholm and an associate of Energy Policy Research Group (EPRG), University of Cambridge. Pär’s research focuses on electricity markets and market design.