Why are fewer German companies choosing to join the stock market?

Start-up activity is declining, private equity is growing, and households and institutional investors are shying away, write Markus Demary and Klaus-Heiner Röhl

Why are fewer German companies choosing to join the stock market? 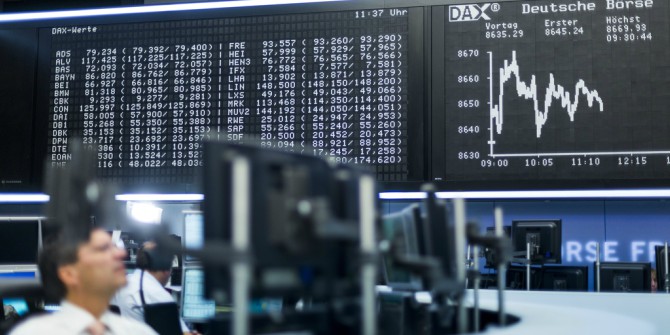 An article by Kathleen Kahle and René M. Stulz on LSE Business Review analyses the shrinking number of public corporations in the US. We  find this phenomenon also in Germany. In our study, we find a decline in the number of listed companies in Germany driven by a decline in initial public offerings (IPOs) and an increase in delistings:

We find that there is no single driving force behind these developments, but several drivers, which we analyse hereafter.

Young high-growth companies from high technology industries, also known as start-ups, form the pool of candidates for an IPO. These innovative start-ups need to pre-finance their high initial investments and in later stages their growth, but they lack the sufficient collateral for debt financing. Instead, they have to rely on equity financing, often in the form of venture capital.

Venture capitalists often exit their investments in companies through an IPO. Part of the declining number of IPOs in Germany is due to the declining start-up activity. Start-up activity in Germany has been characterised by declining numbers since 2005. While more than half a million new enterprises per year were born 12 years ago, in 2016 the yearly number of new enterprises dropped to only just under 300,000.

According to a hypothesis by Elisabeth de Fontenay, the growth of private equity firms has contributed to the decline in initial public offerings and the rise of delistings, because private capital acts as a substitute to shareholders’ capital, but in a less regulated environment with lower compliance costs. With the rise of private equity, there is an attractive alternative to a public listing and thus to an IPO.

A shortage of stock investors

A similar trend is evident for non-financial companies’ asset holdings. These companies have reduced their holdings of listed shares from 31.2 per cent of GDP in 2000 to currently 11.1 per cent of GDP (figure 2). Over the same period, they have increased their holdings of unlisted shares and other equity investments from 27.6 per cent of GDP to 46.8 per cent of GDP. The increase of the other forms of business ownership is likely due to a strategic realignment. In times when knowledge is becoming increasingly important, companies want to gain the knowledge of other companies by buying the entire company. While they have to compete with other bidders for shares of the company on the stock market, they can more easily buy the entire company outside the stock market. Since the younger technology companies are often less capital-intensive, buying a whole company is easier to handle.

From our analysis we conclude that reviving IPOs and stock market participation is desirable. One reason is that stock markets generate important public data about corporate values. In addition, large stock market segments enable investors to diversify their risks. For growing companies, the stock market potentially represents an important source of funding, especially when private equity capital might be less abundant as now. The fact that banks and insurance companies have withdrawn from equity investment seems to be an undesirable side effect of rising financial regulation.

A higher household participation in the stock market is also important, since stock investments are particularly suitable for long-term investments as part of old-age provisions, especially in times of low interest rates. Promoting financial literacy among households might be an important policy task here. Last, but not least, fostering start-up activity will have the positive side effect that the pool for candidates for IPOs will increase again.

Klaus-Heiner Röhl is a researcher at the Institute for Economic Research in Berlin, and a senior economist in the research unit “Structural Change and Competition”. His research focuses on small and medium enterprises (SME); entrepreneurship and start-ups; business regulation and administrative burden; and regional economics.