The Infidel and The Professor: David Hume, Adam Smith and the Friendship that Shaped Modern Thought – Book Review

The Infidel and The Professor: David Hume, Adam Smith and the Friendship that Shaped Modern Thought – Book Review 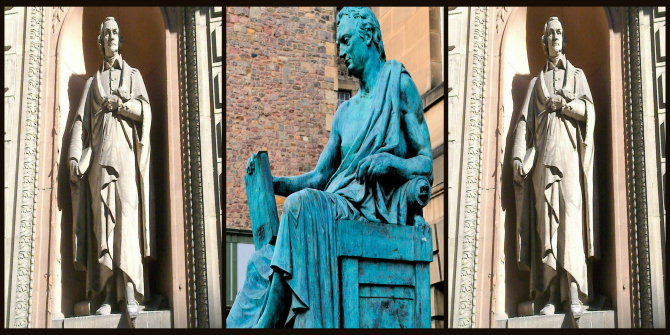 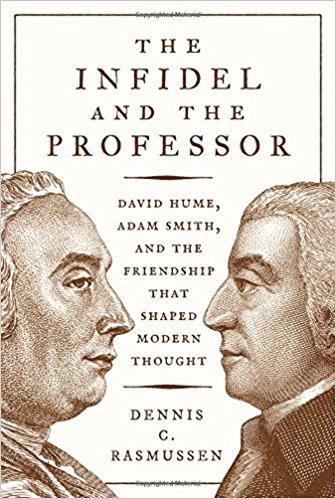 That philosophy takes friendship (philia) as its root is an etymological fact that is as well-known as it is of little interest. We are less likely to think of philosophy as the fruit of friendship than as the labour-induced product of tenured ‘professional philosophers’. Should they become famous, they may, in late age, be feted at faculty club banquets and lauded with obsequious praise. On such occasions, however, they receive their due for ‘work’ rather than for being great friends (to all, a few, or at least one).

To the extent that we entertain, even unconsciously, the idea that a philosopher is or should be primarily a friend (but to whom?), we do so in large part because of our acquaintance with Socrates. In Socratic thought, the capabilities of philosophers are, in theory, all but identical to those of friends. So extensive is the perceived overlap between fitness for friendship and fitness for philosophy in the Western tradition that to assert aptitude for friendship is all but tantamount to announcing it for philosophy. We need, however, only think of the unsettling antics of, say, Jean-Jacques Rousseau, with respect to his (inevitably erstwhile or estranged) ‘friends’, to wonder if, in crude terms, one may be a good philosopher and a bad or at least a very difficult friend. Yet if philosophers are not friends, who are they? And may one be a true friend of wisdom without being a friend to one’s fellow human beings?

Such are a few of the questions arising from Dennis C. Rasmussen’s excellent new book, The Infidel and The Professor: David Hume, Adam Smith and the Friendship that Shaped Modern Thought. Professor of Political Science at Tufts University, Rasmussen’s previous books include The Pragmatic Enlightenment (2014) and The Problems and Promise of Commercial Society (2008). This most recent work is a welcome addition to his oeuvre and, more broadly, to the scholarship on philosophy and friendship emerging over the past fifteen years, including Lorraine Smith Pangle’s Aristotle and the Philosophy of Friendship (2003) and Mary Nichols’s Socrates on Friendship and Community (2008). This book also contributes to a now longstanding tradition of work on the social, communal and affective dimensions of liberal moral psychology, to which the thought of Judith Shklar is central.

The Professor and the Infidel will benefit ‘anyone interested in learning more about the lives and ideas of these two giants […] and about what is arguably the greatest of all philosophical friendships’ (xi), as indeed is its intention, and will suggest areas of significant potential inquiry for specialists in Enlightenment and counter-Enlightenment thought. Given that it aims at accessibility, some fairly basic biographical material is of necessity surveyed throughout, but the book also raises serious and compelling philosophical questions about friendship and modernity.

Rasmussen takes as his central problem the fact that ‘no book has heretofore been written on Hume and Smith’s personal or intellectual relationship’, noting reasonably that ‘one likely reason for this is that their lives—especially Smith’s—are not as well-documented as one could wish’ (3). There is also a deeper issue here with respect to the scope and fixations of modern thought at which Rasmussen has only the space to hint: ‘friendships are more difficult to bring to life than feuds and conflicts: conflict makes for high drama, while camaraderie does not’ (5). Refreshingly, this book abstains from picking over the ruins of or cooking up clashes; rather, it ponders the fairly steady rhythms of a long friendship between two figures notable for their sedateness of life.

In Hume’s case, that sedateness was troubled by controversies arising from his conspicuous atheism. Smith’s relative circumspection with respect to impolitic candour on the topic of religion, combined with his more tolerant view of such matters, purchased freedom from such controversies and, indeed, approbation from readers who did not discern Smith’s more covert display of scepticism. Yet Hume, the blatant atheist, favoured a state-established religion, while Smith, the politic Deist, favoured the separation of church and state. Rasmussen convincing argues that in this respect, Smith takes ‘an explicit stand against Hume’ (174).

Rasmussen ably does the spadework of describing Smith and Hume’s relationship; less attention is focused on extrapolating from it. The most important parts of the book are found in Chapters Seven and Nine, which cover, respectively, Hume’s tumultuous friendship with Rousseau and the influence of Hume on Smith’s The Wealth of Nations. Especially rewarding is the discussion of the socially ameliorative effects of commerce as filtered through Hume’s thought and, subsequently, Smith’s economic writing (162-65). Here, we see the extent to which reading and responding to each other’s work played a formative role in shaping their thought concerning economic, moral and political life. For example, Rasmussen shows that Smith and Hume disagreed concerning the relationship between work, wealth and happiness (170). One might argue that this difference is grounded in varying views concerning the passions.

For Smith, writing in The Wealth of Nations, it is ‘avarice and ambition in the rich’ but ‘in the poor the hatred of labour and the love of present ease and enjoyment’ that ‘are the passions which prompt to invade property, passions much more steady in their operation, and much more universal in their influence’. This suggests Niccolò Machiavelli’s account of the differing passions driving princes and the people. Hume, however, argues for the universal and uniform nature of avarice as a force in all human activity, implicitly including that of the predatory economic variety. Rasmussen does not explore this tension.

A few matters receive similarly short shrift: for example, regarding Hume’s remark that ‘I am an American in my principles,’ the book opposes ‘pragmatic considerations’ to principle without taking into account pragmatism as principle (178). One wishes that the discussion of Socrates and Aristotle and the role of the virtues in friendship (5, 221, 235) had also been more extensive for comparative purposes; not too much weight is given to the question of what, if anything, is distinctively modern about the friendship correctly said here to shape modern thought.

Although this book is primarily about Smith and Hume, and only occasionally about Rousseau, the author’s greatest debt seems to be to the latter, with whom he obviously has a deeply engaged intellectual relationship. But Rasmussen notes that ‘where Hume remained best friends with Smith for more than a quarter of a century, Rousseau seems to have been almost incapable of sustained friendship,’ adding parenthetically that ‘few statements in the history of philosophy are more dubious than his claim in The Confessions that ‘‘I was born for friendship’’’ (134).

This book, then, is about a friendship of which the thin-skinned, hot-headed and floridly paranoid Rousseau was sadly never capable. The pleasure of reading about the amicable, reasonable, relatively placid affinity of Hume and Smith is tinged by the pathos associated with also reading about a philosopher who could, it seems, scarcely even be a friend to himself, much less anyone else.

In beginning to think about the influence of philosophical friendship on modern thought, we might consider the extent to which such thinking, with its undertow of reflection upon alienation, anomie, avarice and enmity, is shaped by and focused upon the friendless. In a line running from Augustine through to Rousseau’s thoughts on alienation (anticipating Karl Marx), the friendless appear to us as those who long to, yet cannot be, ‘other selves’ to other selves, divided as they are between the selves they might have been and the selves they have become, inclinations and aspirations notwithstanding.

Suzanne Smith is the Director of the Center for Writing and Communicating Ideas at the Graduate School of Arts and Sciences at Harvard University.