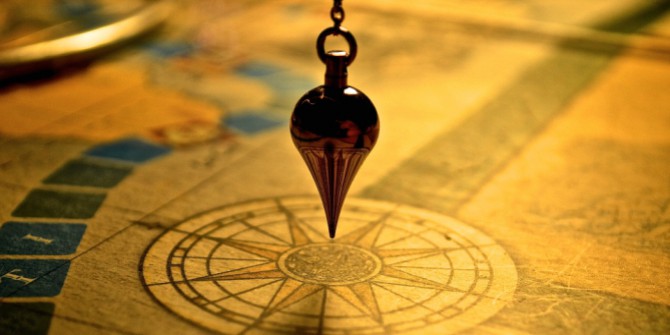 The period 1990 to 2009 has witnessed private firms being promoted as independent borrowers in the global capital market. For a sample of 85 emerging market economies, in terms of percentage measures, the private sector publicly non-guaranteed share of total external debt on average increased from less than 5 per cent in 1990 to about 17 per cent in 2009. In terms of debt levels, the cross-country average stock of private non-guaranteed debt per capita grew from $60 to $663 (expressed in 2010 dollars). The rise of a decentralized arrangement for international debt is also confirmed by recent years’ data, and is likely to continue in the foreseeable future.

However, this tendency is inconsistent with the prediction made by previous studies (Jeske, 2006), i.e., a centralized setup, where only governments borrow and lend internationally, allows higher welfare than a decentralized setup. The reason for the inconsistency is that we may have overlooked the role played by creditor rights protection institutions — a key determinant of how much lending would be granted to private debtors (in contrast, the effect of creditor protection on sovereign debts are less significant since government borrowers are the ultimate arbiter of public contracts). As a result, instead of assuming no protection for foreign creditors and perfect protection for domestic creditors as before, the current research shows that both foreign and domestic creditors are imperfectly protected and there exists residence-based discrimination (Figure 1). 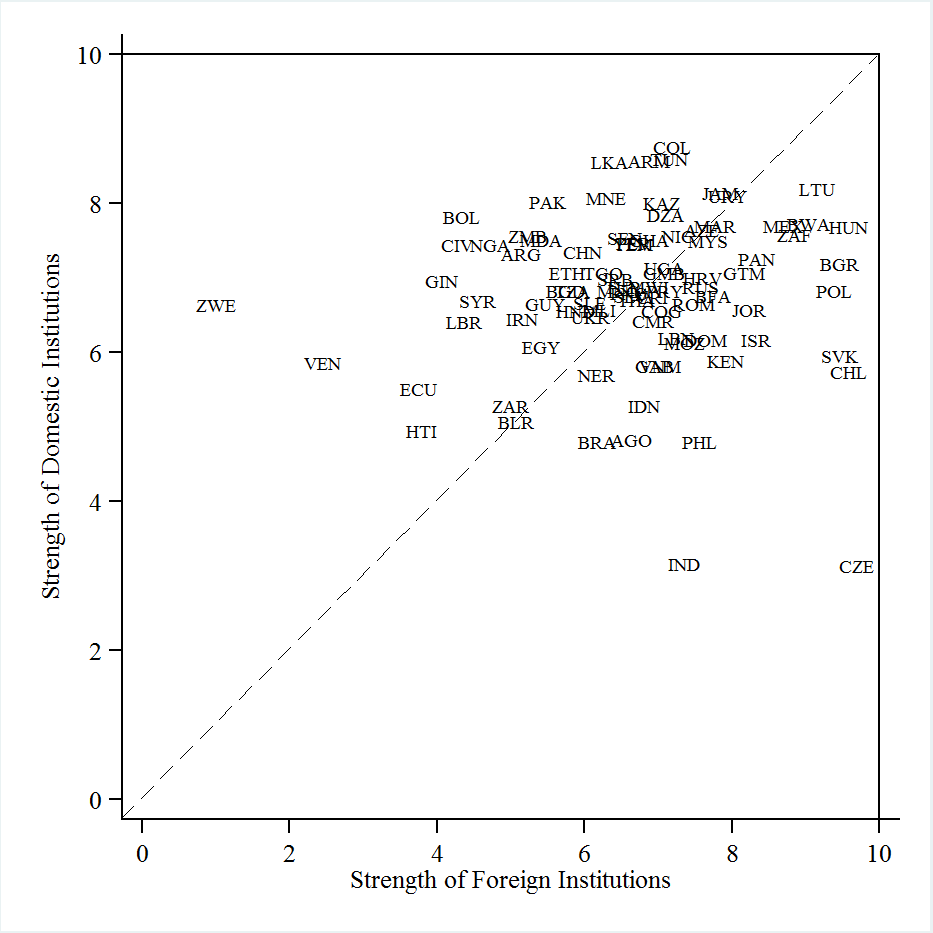 Under a decentralized borrowing setup, foreign lenders who are worried about potential defaults would impose credit ceilings on domestic borrowers. In addition, given imperfect and unequal institutions, it is obvious that foreign lenders would raise private debt ceilings for borrowers residing in countries with stronger foreign creditor protection, but the relationship between debt ceilings and the strength of domestic creditor protection remains unclear. If this relationship is negative, then centralization may decrease the amount of international lending and reduce the welfare of debtor countries. This is because the resulting perfection of the domestic creditor rights institution can be overall detrimental. As a result, to support the growth of private external debt, governments of emerging markets have to carefully structure the pace and sequence of improvements for both foreign and domestic creditor protection institutions.

How do we measure the strength of domestic creditor protection?

Since difference components of institutions are entangled with each other, it is a challenging task to find valid measures for any single set of institutions. To proxy for the protection of domestic creditors’ rights, we construct five alternative measures based on the World Bank’s Doing Business (WBDB) database. This database gathers data from questionnaire responses to especially designed case scenarios involving 100 per cent domestic-owned parties.

Our primary and secondary measures are taken from the resolving insolvency scenario (Djankov et al., 2008): the “debt recovery costs” spent as share of a debtor’s estate value and the “cents on the dollar recouped” of a secured bank loan in insolvency proceedings. They are valid proxies given that insolvency and default events are governed by similar legal schemes.

Our next two measures are based on WBDB’s enforcing contracts topic (Djankov et al., 2003): the “number of procedures” to enforce a plaintiff’s claim and the “enforcement costs” (calculated as share of the value of the claim) to complete all steps in a commercial dispute. The major flaw in these measures is that they are more informative with regard to protection rights affecting commercial transactions rather than financing activities.

The last measure is the “strength of legal rights” index from the getting credit scenario (Djankov et al., 2007). This index captures the extent to which rights of borrowers and lenders are protected by collateral and bankruptcy laws. Therefore, it is about the existence of laws that matter less than enforcement, and is less preferred.

After unbundling institutions protecting domestic and foreign creditors’ rights. We estimate a negative relation between the degree of domestic rights protection and the external stock of private non-guaranteed debt in 85 developing countries (Figure 2). 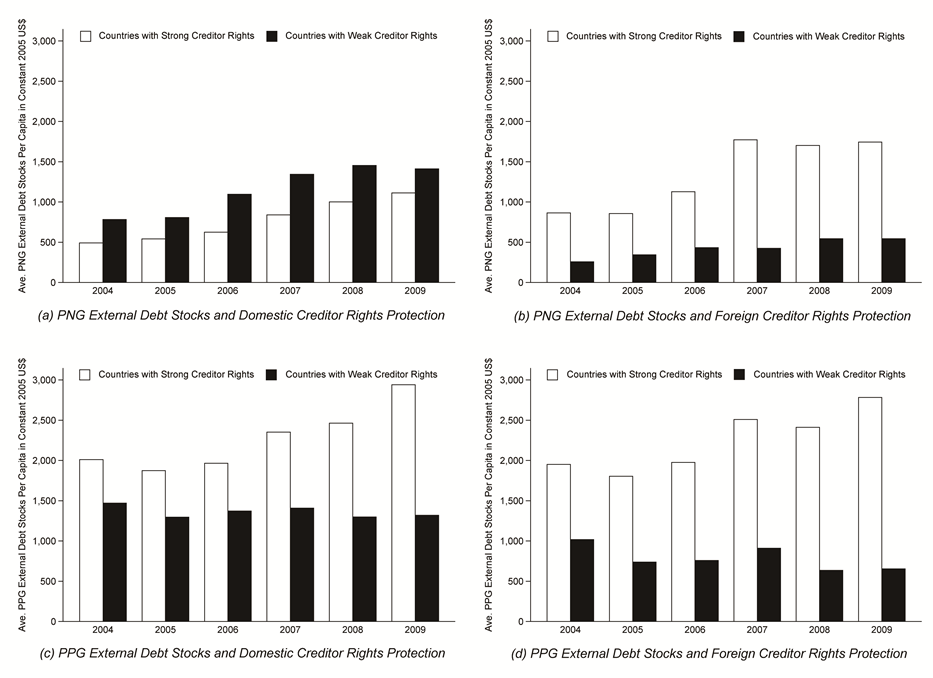 A supply-side explanation is that strong domestic protection supports reliable outside financing options for potential external debt defaulters; foreign investors anticipating this would tighten credit constraints ex ante. At first blush, this argument could apply equally to public borrowing. We assert, however, it is more relevant to private contracts. For one thing, the legal system plays a lesser role in public debt repayment. For another, given the limited liquidity of purely domestic funds, a large portion of funds available to individual defaulters is intermediated from overseas via non-defaulted agents. Yet if the government defaults, the whole country is excluded, so it is much harder to mitigate the punishment similarly.

Another explanation relates to the power of a demand-side story: firms might be unwilling to borrow internationally when domestic institutions can guarantee an ample supply of local credit to draw on. We argue this substitution effect is small for several reasons. First, international markets often come to complement, rather than substitute for, the domestic capital pool. Second, not all firms have access to foreign funds, but for those who succeeded in inducing foreign investments or had the skill to issue bonds abroad, external debt is preferred because of limited monitoring and lower capital costs. Third, there is extensive evidence suggesting that creditors determine the terms of contracts and debtors are constrained.

To get a sense of the magnitude of the adverse relation, consider two countries with foreign creditor rights rankings below the lower quartile. If we move up from around 25th percentile (Nigeria) to around 75th percentile (Iran) in the distribution of domestic creditor rights, we have $170 less debt per capita during the sample period of 2004-2009 on average. It represents a 35 per cent decrease in the sample mean, which is $487. With a parallel pair of countries (Cameroon and Greece) that fall above the upper quartile in foreign creditor rights rankings, this negative effect turns positive ($937 more debt per capita as we move up from 25th to 75th percentile in domestic rights). It is because the supply-side story barely operates when foreign investments are fully guarded by quality protection of foreign creditors’ rights. Stronger domestic protection now indicates better governance and creditworthiness. These findings are robust to different measures of creditor rights, to controlling for a host of non-legal determinants, and to a multiple instrumental variables strategy.

Hypothetically, if we can sort out the complex and contingent relations of a bundle of institutions, it is intuitive that the bundle’s domestic side supports home market, and its foreign side boosts external intermediation. A negative relationship between the domestic arm of creditor rights protection and external private debt suggests that, to attain efficient borrowing, domestic rights institution building should be combined with eliminating foreign discrimination; otherwise, there is an incentive for private sector to default internationally first, causing foreign creditors to tighten constraints. This policy implication is evident in the international round tripping in relation to financial transactions in Africa, India and China. It also underpins the “revived Bretton Woods” interpretation of the capital flow structure vis-a-vis emerging Asia (Dooley et al., 2004).

Xiang Gao is currently the head of Research Center for Finance at Shanghai Business School and the China chapter executive of Chartered Alternative Investment Analyst Association (PhD, CFA, FRM, CAIA, FAIQ). His research interests include international economics, financial markets, and risk management. He has published in Economic Journal, Journal of Economic Dynamics and Control, and Journal of Comparative Economics.