Bond prices both reflect and influence the fundamentals

Bond prices both reflect and influence the fundamentals 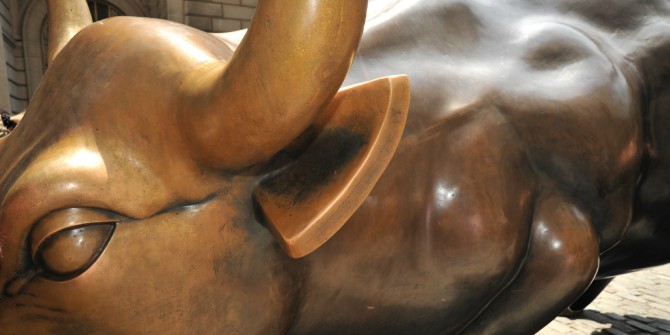 Most economists assume that bond prices merely reflect fundamental factors such as the bond’s interest rate, its face value and the likelihood that the bond issuer defaults. Bond issuers that are more likely to default will have to offer a higher interest to compensate the buyer for the higher risk.

Most economists stop here. However, for real-world bonds, it is very likely that prices not only reflect the fundamentals, but also influence those fundamentals. The same can hold for other assets, but we will focus on bonds here to keep things simple. For bonds, this feedback from prices to fundamentals is very intuitive: the prices achieved in the initial public offering (IPO) determine the financing costs for the bond issuer. If these financing costs are too high, the bond issuer is more likely to default on its debt, for example because the bond issuer goes bankrupt.

One may ask whether it is really possible that markets misprice bonds so severely that this has noticeable effects on the economic situation or even on the survival of bond issuers. This is not an easy question to address empirically, because the fundamentals of bond issuers are in general unobservable. Thinking for example of the euro crisis, one may claim that some of the southern European countries were brought into economic distress by the increase in their financing costs, but it is also possible that the increase in their financing costs was mainly a result of a deterioration of the fundamentals of these countries.

We know of one example nicely illustrating how the feedback from prices to fundamentals can be of crucial importance. This example is the bankruptcy of the toy retailer Toys “R” Us in the fall of 2017. The company was paying about 400 million USD a year to service its debt. While its debt was high, profits excluding the debt service were around 500-600 million USD per year. Consequently, investors considered the company to be able to service its debt and until the beginning of September 2017 the company’s bonds traded at almost par (meaning that investors deemed the bonds to be of very low risk).

As noted earlier, it is difficult to estimate whether bonds subject to default risk are priced according to fundamental factors empirically, because it will often be impossible to observe or disentangle the different potential forces at work. However, it is possible to experimentally investigate whether these feedback effects matter for market prices in a controlled laboratory setting. This is what we do in a recent research article. We develop a simple model of bond pricing where the price achieved for the bonds in the IPO influences the probability that the bond issuer defaults. We subsequently observe laboratory participants who participate in IPOs and trade bonds in secondary markets in a variety of treatments. These treatments feature both decreasing and increasing fundamental values. The treatments also include situations in which it is relatively easy to understand the feedback effects from prices to default probabilities and situations in which it is more difficult.

We can only speculate as to which of our results – the poor pricing of inexperienced participants or the accurate pricing of participants after experiencing an identical market multiple times – has more real-world relevance for the actual pricing of bonds subject to default risk. Still, we think there are good reasons to believe that feedback effects from default risk to prices and from prices to default risk are in fact operating in real-world bond markets. For instance, the investor George Soros has suggested that feedback effects of the type we have identified in the laboratory – a phenomenon Soros terms “reflexivity” – are indeed pervasive in financial markets. We look forward to more studies examining this feedback (or the feedback from prices to fundamentals more generally) theoretically, experimentally, and using field data.

Matthias Weber (PHD University of Amsterdam) works at the Center for Excellence in Finance and Economic Research (CEFER) at the Bank of Lithuania and at the Faculty of Economics at Vilnius University. His main research interests lie in the intersection of behavioral economics with macroeconomics, finance, and public economics. He has published in multiple academic journals, including the Journal of Finance and the Economic Journal. More information is available at www.weber-matthias.eu.

John Duffy (PhD UCLA 1992) is Professor of Economics at the University of California, Irvine and co-director of UC Irvine’s Experimental Social Science Laboratory. His research interests are in behavioral and experimental economics, game theory, macroeconomics and political economy and he has been a strong advocate for the greater use of behavioral and experimental methods in macroeconomics and finance. His research has appeared in top economics journals including the American Economic Review and the Review of Economic Studies.