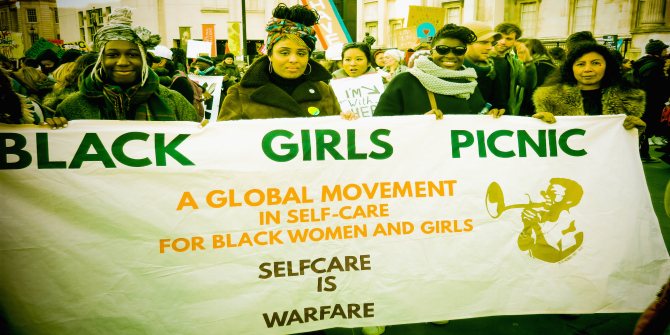 This review is published as part of a March 2018 endeavour, ‘A Month of Our Own: Amplifying Women’s Voices on LSE Review of Books’. If you would like to contribute to the project in this month or beyond, please contact us at Lsereviewofbooks@lse.ac.uk. If you are interested in this review, you may also like to listen to/watch a recording of Professor Akwugo Emejulu’s LSE lecture, ‘Crisis Politics and the Challenge of Intersectional Solidarity’, recorded on 31 January 2018. 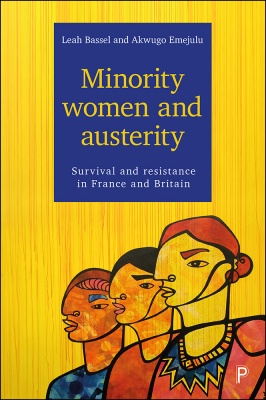 Shakespeare’s Hamlet ends with an orgiastic spectacle of death. At the close of the play, Norwegian prince Fortinbras saunters from various military victories into a scene replete with unnecessarily created corpses, his initial self-assured bravado striking a jarring contrast to the morbid misery of the moment. Former UK Chancellor George Osborne may not be a Norwegian prince, but he demonstrated a similar gift for misreading the room earlier this month when he tweeted about the UK government finally meeting its austerity budget targets, two years later than the anticipated date. ‘We got there in the end’, he noted – who is ‘we’?, I wonder – ‘a remarkable national effort’. Not to be outmatched, former Prime Minister David Cameron added that Osborne’s policy ‘was the right thing to do’.

In this instance, the avowed ‘right thing’ has caused the doubling of Britain’s homeless community in parts of the UK; an increased 700,000 people living in poverty; and a projected 120,000 extraneous deaths due to cuts to public social spending. Reminiscent of the revolutionary dictum – often attached to France’s Reign of Terror and the Russian Bolshevik revolution – that you must break a few eggs to make an omelette, Osborne and Cameron’s tweets made one thing clear. For them, the price of their proverbial omelette – a radical fundamentalist politics that valorises the preservation of upper-class privilege over genuinely sense-making economics – was arguably the proverbial ‘eggs’ of the hundreds of thousands of avoidable deaths and the widespread immiseration of our society’s most vulnerable.

Recent discussions of the political effects of economic austerity have centred around the so-termed ‘white working class’: a social group that is invariably coded as male, politically nativist and professionally attached to classic blue-collar manufacturing. Leah Bassel and Akwugo Emejulu’s Minority Women and Austerity: Survival and Resistance in France and Britain offers a welcome and refreshing addition to the debate, signalling that it is in fact possible to both fall victim to an increasingly cosmopolitan world governed by globalised market capital and also reject the tribal ethno-nationalism of the so-called populist right.

Based on sociological research conducted across the UK and France, Bassel and Emejulu’s work is the unsettling yet important result of various one-on-one interviews, focus groups and knowledge exchange events with minority and migrant activist women in cities including Manchester, Glasgow, Lyon and London. The women interviewed in the book include third sector employees who work in migrants’ rights, social care and anti-poverty mobilisation. The insights garnered from their studies speak to how minority women navigate their race and gender, professional lives and social groups in an increasingly harsh economic landscape. ‘I go to a women’s group’, narrates a Scottish Chinese interviewee in Glasgow; ‘we used to do things like yoga and Tai Chi therapy […] but the funding for them has gone, so now we teach each other’ (85). ‘I’m fed up’, says another activist of balancing the day-to-day grind of wage labour alongside necessary activism for her basic rights: ‘I’m fed up of fighting, to not have Saturdays, to not have evenings and on top of this to work on never-ending files for hour and hours’ (79).

One of the major contentions in Minority Women is that the story of austerity as we know it – that the 2008 crash brought about a universal state of social and economic precarity and impoverishment, prompting nation states across the world to adopt austerity measures – is a narrative of decline that nonetheless privileges the standpoint of the previously socially mobile middle class. Bassel and Emejulu cite Dara Strolovitch’s argument that ‘the naming of the 2008 crisis is a power relation that focuses policy attention and resources on the transformed economic landscape that the economically privileged must now negotiate’ (40). A London-based Black woman activist speaks to the lived norm: ‘If you’ve got a family, you’re a single parent, you’re a Black woman who is probably working two jobs […] you’ve got a tyrant-type boss […] you’re probably too tired to get up.’ Bassel and Emejulu’s conversations with these women suggest that while 2008 indeed saw the collapse of major financial markets, the unarticulated significance of this particular crisis is located in how it drew ‘middle-class groups […] into precarious social and economic circumstances in which minority women have always had to struggle’ (40).

For many minority women in the UK and France, precarity was the modus operandi of their lives long before 2008. They were, and continue to be, statistically more likely than their counterparts to be employed in the public sector; involved in chronically underpaid service and care work; and bear the burden of both familial and domestic welfare, all of which have come under focused attack through austerity cuts. The financial crisis and the resultant embrace of austerity economics, Minority Women suggests, are a symptom of the reign of global financialised capital adopted in the UK and France since the 1980s, rather than an aberrant mistake made by some individual rogue agents. More to the point, different social groups in these nations have diametrically different experiences, and those who suffer the most from financial crises are often the ones furthest from their making, in spite of the frequent embrace of a falsely universalist ‘we’ by politicians to justify policies that will hurt the most vulnerable (consider Osborne’s use of terms like ‘national effort’). An activist with UK social group Sisters Uncut acutely observes that ‘as a woman of colour I know we have always fought against the double burden of sexist and racist oppression and have always been ignored in our fight’ (111).

The forced erasure of social difference in favour of a heavy-handed, universal ‘we’ is identified in Minority Women as a major form of social and political delegitimation, used by both the political right and left to the detriment of the minority women activists. Europe, and France in particular, is targeted for its ‘political racelessness’: a notion of ‘racial Europeanisation’ defined by critical race theorist David Theo Goldberg as a state of affairs in which ‘race is to have no social place […] it is to be excised from any characterising of human conditions, relations [or] formations.’ Unlike America’s often explicit invocation of race as both a category of oppression and/or liberation, in ‘politically raceless’ Europe minority women have to tread carefully in a world that casts them invariably as ‘an other’, yet also denies them recourse to meaningful recognition through a bad-faith regime of enforced homogeneity. On the left, Bassel and Emejulu further take aim at the proclivity of the European ‘white left’ to take a purely class-based reading of political struggle, irrespective of the differentiations of race and gender, drawing to mind Labour’s ill-fated ‘controls on immigration’ mugs in 2015. One black activist interviewed by Bassel and Emejulu notes how she frequently runs into a type of white activist who purports to understand ‘what true equality means and what oppression is’ in theory, but becomes ‘very defensive’ when confronted with difficult conversations about race ‘because they don’t want to actually admit they’ve got it wrong’ (96).

Minority Women wades into the inevitable debate about the place of identity politics in economic struggle, discussed with much fervour by academics and pundits alike with varying degrees of insight. By speaking to how minority women are disproportionately affected by austerity, how they have been failed by not only the right but also the left and how they bravely and affirmatively constitute themselves as political agents according to contours of race and gender, Bassel and Emejulu open themselves up to the familiar criticisms that they are ‘sowing division’ for the sake of it, thus preventing a genuine progression towards economic justice.

Yet, the sociologists anticipate and evolve beyond such criticisms through several important manoeuvres that should, in an ideal world, move the debate beyond the current stasis we see today. Bassel and Emejulu first point out that the foundations of the commonly-touted universal liberalism heralded by the Enlightenment – ostensibly under attack by ‘identity politicians’ today – were in fact deeply embedded in concurrent projects of racialised colonialism: here, they cite Barnor Hesse’s observation that the then-modernity of Europe was built on the notion of ‘rational masculinity’ in contradistinction to the ghastly spectres of ‘savages or women’. (Mark Lilla has argued that identity politics began at college campuses in the 1980s. Counterpoint: was the Enlightenment identity politics for white male Europeans?). But, more importantly, they argue that the recognition of how social differences are personally experienced is not in itself divisive, but rather serves as the founding premise of a world in which all iterations of personhood can be accorded the same degree of respect. In a particularly acute statement, Bassel and Emejulu note that ‘difference is not the enemy of solidarity but the foundation for building a collective identity and a politics based on dignity and respect’ (28).

In her foreword to Minority Women, seminal black feminist thinker Patricia Hill Collins praises the work for approaching its minority women subjects as self-constituting political agents: a method that ‘demonstrates a clear yet contentious break with dominant epistemological frameworks that over-emphasise minority women’s status as devalued victims’ (xii). The strength of Minority Women and Austerity is precisely its ability to integrate its ethos at every layer of its analysis, from its epistemic premise that ‘politics’ involves far more than what is done in the staid, often white and male halls of state power, to a research methodology that centres the personal parole [power of speech] of its minority women subjects. Left ambiguous, however, is a sense of the efficacy of such grassroots ‘politics of survival’ against a ubiquitous economic regime of austerity that is, as Bassel and Emejulu note, the result of a decades-long ideological assault on the limits of the collective political imagination.

Nevertheless, the valuable intervention made by their work should not be understated. Contemporary discussions on race, gender and economics today are hamstrung by false dichotomies that re-entrench the mandate of those in power: the popular assumption, for example, that any rejection of financialised global capital always comes from retrograde right-wing nativism; that the articulation of social difference is in itself a divisive act that will only lead to more division; and that struggles for cultural recognition are inevitably separate from economic ones. In this confused discursive landscape, Minority Women offers searing and important cultural insight into the inherent intersectionality of meaningful political struggle, with an added warning that history does not bend towards the arc of justice of its own accord. Rather, social change is often the result of painstaking and often tedious organisation, activism and activity among those relegated to the margins. Minority Women does this a major service by centring this story, as these subjects rightfully deserve. Or as the women of Blanc-Mesnil ­– a north-eastern Parisian commune frequently portrayed by politicians as a ‘infamous site of disorder and failure’ (96) – powerfully affirm: ‘we don’t want to wait to be given la parole. We wanted to simply take it.’