It's not true that by making economic rights increasingly strong compared to other rights we also increase economic freedom, writes Åsbjørn Melkevik 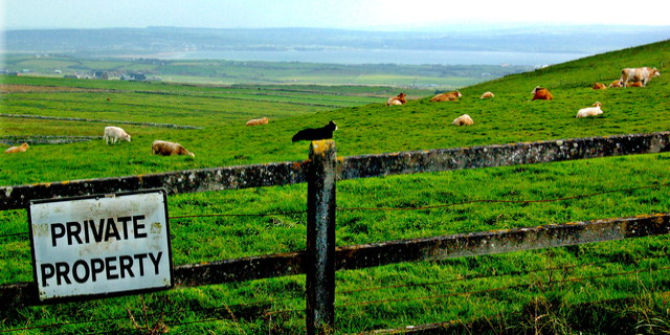 One of the main questions dividing the left and the right is about how economic rights rank compared to other rights and public goals. That is, the question is about what can or cannot outweigh economic rights.

The left regularly argues that economic rights can be outweighed by legitimate state interests, like social justice, such that they are “prima facie rights”. Some scholars representing the right, conversely, have recently sought to elevate economic rights to the status of “basic rights”. This terminology follows the work of John Rawls for whom a right is “basic” when it can only be outweighed by other basic rights and when other aspects of justice can be pursued only by those means that fully respect the basic rights.

The objective of many neoclassical liberals, libertarians, and conservatives, who defend economic rights as basic, is to counter extensive programs of taxes and transfers. This divide, I believe, is fictitious. Economic rights cannot be basic. The divide also obscures the real dilemma we face regarding economic rights – it is not true that by making such rights increasingly strong compared to other rights we also increase economic freedom. Quite the contrary, doing so may weaken economic freedom.

Let me explain the fallacy of basic economic rights. There is no genuine disagreement, I should mention, about the nature of economic rights between the left and the right – or at least there was none until very recently. Economic rights may be divided between the liberties of labour, transacting, holding, and using property. Such rights are indeed prima facie rights, I think, and arguments that would elevate economic rights to a higher status are potentially dangerous.

Eminent domain – the expropriation of land for public use

We may recall that classical liberals like Friedrich Hayek or Milton Friedman who have most enthusiastically defended the importance of economic rights nonetheless accepted that a public agency may expropriate someone’s private property if it deems it to be in the public interest – say, to build a military base. If economic rights were basic, conversely, your local government could not build a major highway crucial for the development of your region if one irritable landlord were to refuse to sell his land. Eminent domain is an established practice today, and though many cases are problematic, the overall practice is nevertheless essential for our economic freedom. We may review two cases to pinpoint one problem that is often obscured today.

The case of Kelo v. City of New London 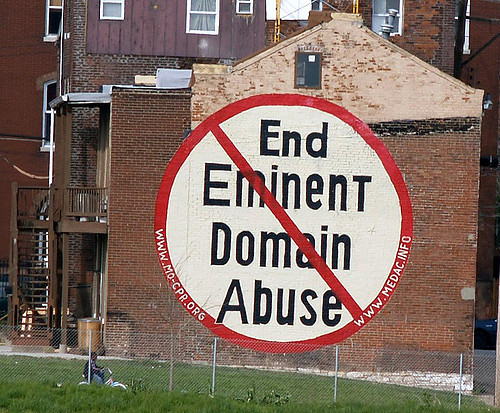 Photo by christina rutz, under a CC-BY-2.0 licence

First, consider Kelo v. City of New London (545 U.S. 469 (2005)). A redevelopment plan was supposed to revitalize the ailing economy of the city of New London, Connecticut, and therefore the city purchased property in the Fort Trumbull neighbourhood, through its development agent, and sought to enforce eminent domain to acquire land from owners unwilling to sell. Pfizer Corporation was supposed to build research facilities on the land, and thus the city initiated condemnation proceedings when the owners of the rest of the property, the petitioners, refused to sell.

The Supreme Court, in a controversial 5-4 decision, justified the enforcement of eminent domain under the Takings Clause of the Fifth Amendment, saying “nor shall private property be taken for public use, without just compensation.” Economic development, the Court ruled, qualifies as “public use” under the said clause. This case, however, is moved by a reverse-Robin Hood understanding of the clause – taking from the poor and giving to the rich. The decision also eliminates the distinction between private and public use of property, since the taking was for the benefit of Pfizer.

Second, consider Hawaii Housing Authority v. Midkiff (467 U.S. 229 (1984)), which is a case of oligopoly in land ownership. Twenty-two landowners owned about 72 per cent of fee simple titles on the island of Oahu, where about two-thirds of the population of Hawaii live. The land being concentrated to such an extent in the hands of a few private owners was a remnant of the feudal system and the caste organization in Hawaii. That is, traditionally, the aliʻi nui and kaukau aliʻi lines ruled and controlled the main Hawaiian Islands. The Hawaii State Legislature, therefore, used eminent domain to take land and redistribute it to private residents.

In an 8-0 decision, the Supreme Court held that such redistribution was constitutional, as a legitimate exercise of the police powers to correct a market failure. Though one may disagree with the rationale of the decision, as well as with the rational basis test used to arrive at that decision, there was manifestly a problem that needed to be addressed – people could practically not become homeowners on Oahu.

These two cases are indicative of an under-appreciated ambiguity concerning economic rights. We all agree that individuals have property rights, and that these rights may be outweighed by some considerations, say, of utility. But not any consideration will do. We should not take from the least well off to then give to the best off as in the Kelo case – this cannot be understood as a compelling state interest. Yet that people could live their entire lives without ever having the opportunity to own their homes is a problem. For families who have lived on Oahu for generations, we may think, not being able to buy a house is a compelling reason to use eminent domain. The access to homeownership is most probably a vital component of economic freedom.

The real question, therefore, as Hayek noted, is about “the conditions under which the particular rights of individuals or groups may occasionally be infringed in the public interest” (page 217). If the total amount of economic freedom can be increased by having some economic right outweighed in some circumstances, then such rights should not be basic.