UK entrepreneurship is doing well, but key constraints need to be addressed

UK entrepreneurship is doing well, but key constraints need to be addressed

Experts in the field of entrepreneurship recently met at the LSE to discuss reform strategies proposed in a new policy brief, which seeks to promote entrepreneurship in the UK. Mark Sanders, associate professor at the Utrecht University School of Economics, presented on behalf of the Financial and Institutional Reforms for Entrepreneurial Society (FIRES) research team, following the publication of its seven step approach to stimulate entrepreneurial reform. 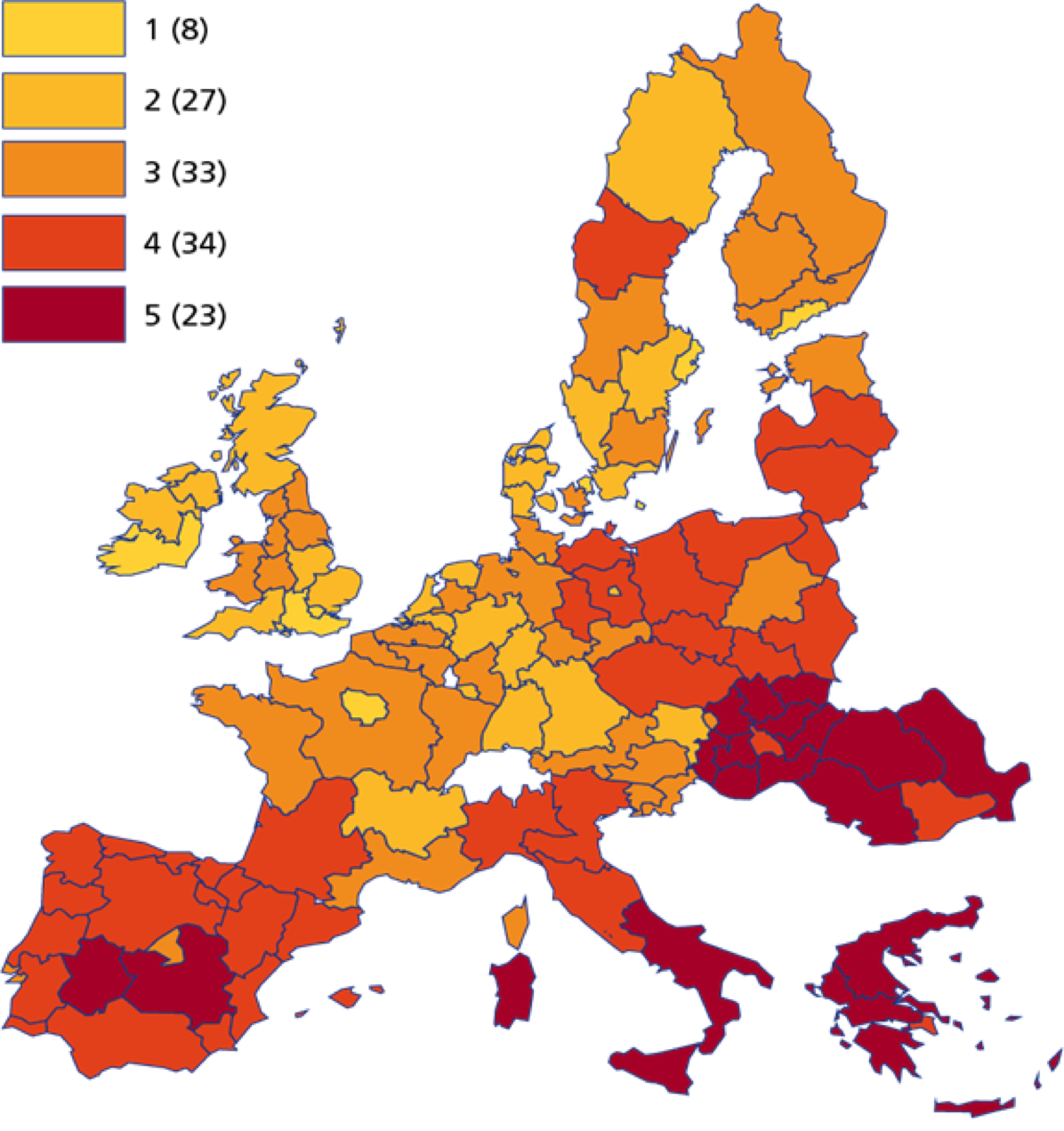 The UK was found to perform relatively well in comparison to other European economies especially in terms of its entrepreneurial ecosystem of liberalised markets, deep formal financial markets, strong science and knowledge creation and a powerful legacy of protection of intellectual property rights (IPR). However, the UK system based on market forces with policies centred on deregulation may have begun to reach the point of diminishing returns; it may be time to consider more pro-active government policy-making.

Figure 2 below uses 14 so-called pillars of entrepreneurial actions (broadly the attitudes, abilities and aspirations of entrepreneurs) to illustrate areas of strength and weakness in the UK relative to the European Union as a whole and selected countries. It reveals that the UK has a comparatively strong but rather unbalanced entrepreneurial ecosystem. It excels in ‘opportunity recognition’ and ‘risk acceptance’ by EU standards, but less so on ‘networking’ and ‘start-up skills’. Furthermore, the UK lags slightly relative to the EU average on ‘internationalisation’ and ‘process innovation’ and generally scores poorly in parts of the upper-left of figure 2 (entrepreneurial aspirations, pillars 10-14). While the UK is strong on radical innovation and identifying entrepreneurial opportunities, it is weaker in bringing those projects to fruition.

Figure 2. UK performance in the pillars of entrepreneurial activity compared to EU 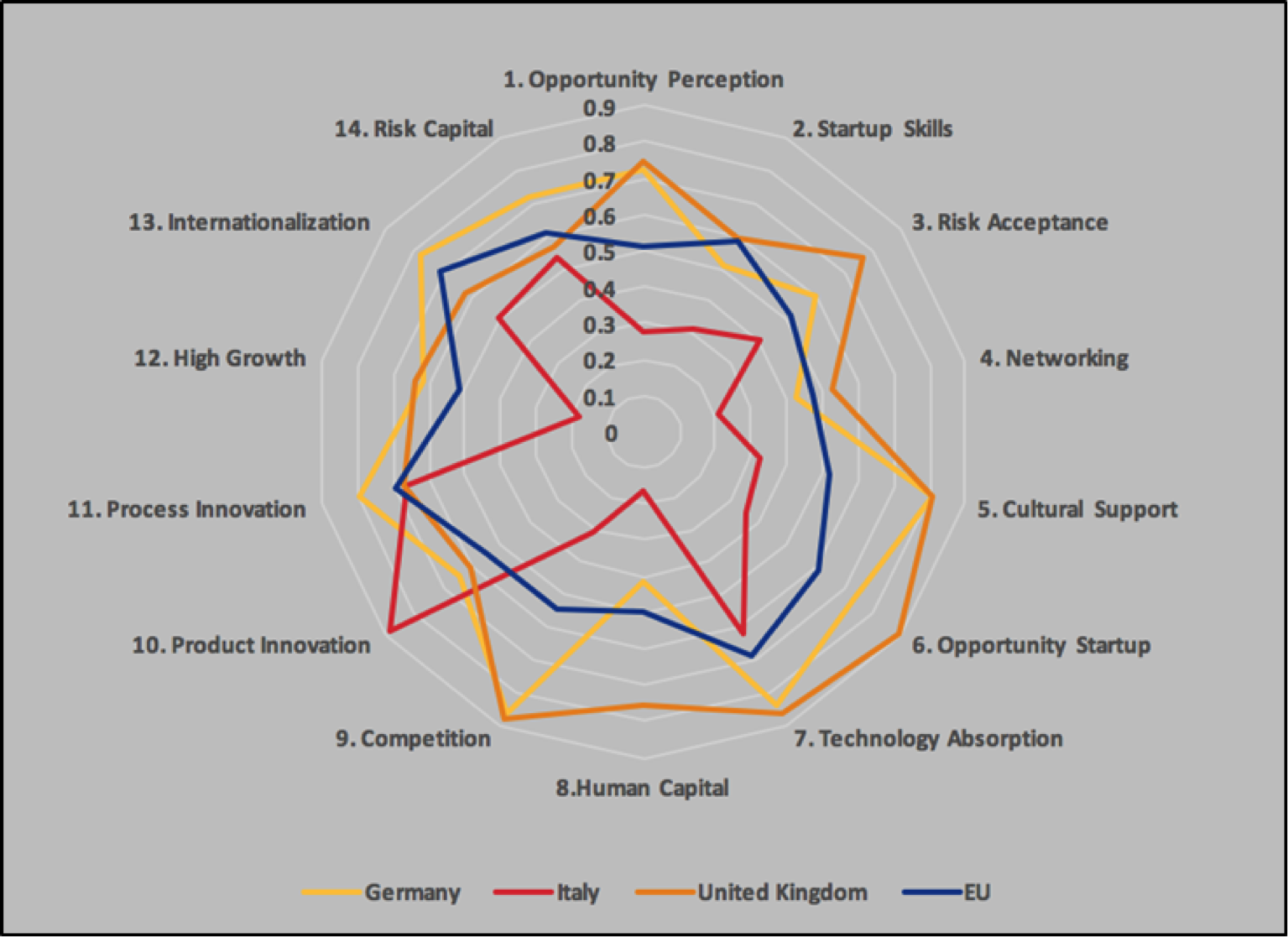 Key constraints underlying pillars include labour skills. There is an uneven distribution of labour force in the UK where there is a lack of incentive for people to stay outside of London (or go back home) to contribute to growing businesses that have severe labour shortages. Firms need incentives to invest in firm-specific human capital, and public policy needs to consider the weaknesses in the supply of early stage entrepreneurial finance.

Policies to reduce failure and accelerate scale-up are also proposed to be as important as policies to generate more entrepreneurship. It was argued that in the US, start-ups may grow more rapidly, while in Germany, there might be fewer start-ups but they are more likely to survive and prosper. Entrepreneurial attitude in the UK is abundant, but the results in terms of actions lag and there is a need to focus on learning from failure in the entrepreneurial process.

Finally, while the UK ecosystem rewards entrepreneurial success it is not very inclusive, with resources highly concentrated in London and the South East. There is a visible centralisation of the entrepreneurial resources in London, which is now starting to be perceived as a competitor to Tel Aviv or Silicon Valley. Yet, the city is only attracting a narrow demography. Jonathan Levie, professor at the Hunter Centre for Entrepreneurship, expressed his deep concern about this centralisation of entrepreneurial activity and resources in the UK into London. He illustrated the problem with data indicating a huge increase in company creation and growth in London boroughs such as Hackney (around Silicon roundabout), whereas in other regions of the UK the rate of company formation and growth is much slower. The UK’s political and policy centralisation is depleting regional energy and distorting national culture.

A reform agenda for the UK

Dr Sanders presented a set of general recommendations based on open access to knowledge, more inclusivity in the entrepreneurial process and levelling the playing field regionally.

As an example, FIRES proposes experimenting with open intellectual property rights to ensure access to and commercialisation of knowledge. However, participants questioned the proposal of abandoning IP protection and pointed out that regulation regarding patents seems more relevant. Regulation regarding standing patents were seen as blocking growth by allowing patent protection to continue for twenty or thirty years. It was suggested instead that one could either increase renewal fees of patents, or open IP systems to radical change towards “Open Source”. Also, some participants pointed out the importance of keeping IP laws to encourage investment, as it is one of the few tangible components of an entrepreneurial project upon which investors can make evaluations about where they should invest.