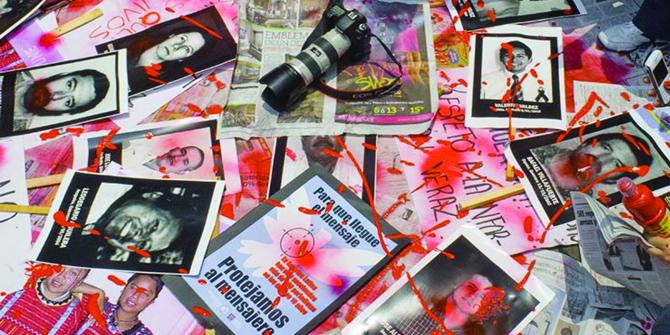 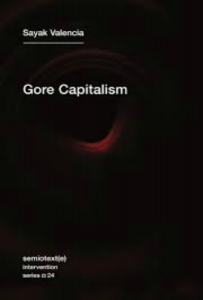 When I first picked up Sayak Valencia’s essay, Gore Capitalism, published as a short book, I was intrigued by the title. I was able to vaguely define what I thought it meant by breaking the term in two, deducing that it had something to do with the relationship between violence and capitalism. In essence, this is what Gore Capitalism discusses, but in far greater detail and complexity.

Valencia presents us with a carefully considered and thorough exploration of the outbreak of violence in the ‘Third World’, as she refers to it, and how hyperconsumerist neoliberal capitalism has transformed this into a commodity to be traded and utilised. Using Mexico as her primary case study, Valencia draws on postcolonial and feminist theory to examine a number of interlinked ideas, such as the role masculinity plays in the growth of gore capitalism; corporeal politics and the importance of the body and its vulnerability; the legitimisation of violence as a form of paid work; and the erosion of civil society.

The essay aims to introduce new discourse that will enable discussions about gore capitalism to take place on a broader field. ‘We are’, Valencia writes, ‘interested in developing a discourse with the explanatory power to help us interpret the reality produced by gore capitalism’. Owing to this, Gore Capitalism is an essay that takes time to read and process; there are complex ideas discussed here and the text is too heavy to take in through one sitting. Despite this, there is no danger of getting lost. Valencia leads us skilfully through her argument, laying out each point with judicious detail. The book is divided into chapters, and within these the text is broken into segments through the use of headings and subheadings, allowing the reader a clear idea of where the argument is proceeding and the subject of each particular section. With such a complicated and intellectually dense topic, such signposting is welcome, as it keeps the reader focused on the main points Valencia is making.

At the beginning of the essay, we are provided with a succinct but satisfying explanation of why the term ‘gore capitalism’ was chosen, and in the introduction, an expansive definition of what this term actually means in the context of the book. To summarise briefly: gore capitalism is a product of economic polarisation. People have been told to want and to consume, leading to frustration when this cannot be achieved. From this emerge figures whom Valencia has termed ‘endriago subjects’: those who use necroempowerment (the use of violence to achieve status and power) to confront and change their situation, and through this, legitimise underground economies, which then have an expanding influence.

It is evident from reading Gore Capitalism that this is a topic of incredible importance to Valencia, and her desire to see it widely discussed is communicated clearly through the urgency with which she writes. A significant argument that shapes the essay as a whole is one that Valencia makes early in the book: gore capitalism has effectively been rendered invisible. Although Valencia herself draws on Mexico, and in particular Tijuana, as her example throughout the text, she also emphatically argues that gore capitalism is not just a problem contained within the Third World: it is not something that is limited to the black market, but has had an impact on the world entire. Yet because it has been perceived in this way, viewed as being limited to a single geographical area, it has not been considered important or influential and therefore has neither been discussed with the gravity it requires nor by as broad an audience. Yet, as she writes:

“now that the criminal economy is estimated to make up no less than 15% of global commerce, the effects of gore capitalism on the world is evident [sic]; these numbers bestow it with real power in terms of planetary economic decisions.”

Drug trafficking is one example that highlights this, and one that Valencia introduces within the essay and expands on in some detail. As an industry, drug trafficking is ‘currently the largest industry in the world’; its profits flow through global financial systems, yet rather than be seen in this manner, it is countries like Mexico that are singled out as the only places involved. There are multiple reasons for this, but the notable impact drug trafficking has on these places is no doubt a significant influence on this perception. Valencia discusses the high levels of visible violence that emerge from the industry and describes her own experience in Tijuana of seeing a dead body wrapped in a black plastic bag fall out of the back of a pick-up truck as well as her friend’s – a resident there – lack of shock at its appearance.

Cartels in Mexico have used the media and publicity to advertise their crimes, sending messages to rival cartels but also to the population. The media’s role in the spread of gore capitalism is something Valencia is deeply critical of throughout the essay:

“These criminals see the media as a tool to promote themselves and their status, and the media provides them with publicity and legitimacy […] In its quest for an ever-larger audience the media becomes an accomplice of organized crime, necessary cogs in the machine to spread and popularize gore capitalism.”

There have also been instances where traffickers have used their profits to create infrastructure, meeting the needs of the population by building schools and hospitals. Although beneficial, these actions, as Valencia notes, detract power from the state itself and further legitimise those in criminal organisations, physically showing the power that involvement in the drug trafficking industry can bring.

Gore Capitalism is an essay that I would recommend to any reader with an interest in current affairs and the development of the global system. While it has a specific focus, the book draws on such a variety of ideas that it would be difficult to read it and not find something that intrigues, horrifies or provokes. It is a challenging read in places due to how much information it contains, yet it is a topic that demands and rightly deserves to be fully appreciated over the course of several readings, pen and paper at hand. Valencia makes many powerful arguments that need to be explored and discussed, and I believe that her introduction of new terminology and theoretical tools in this essay will enable that to happen. Gore Capitalism offers important insights into political changes taking place around the world and shows clearly how central violence has become to the development and growth of capitalism. Valencia does not tell us how such violence can be ultimately curtailed, but she does suggest that, with defiance and resistance, such a conclusion might be possible.

Kate Bailey completed her PhD in the History Department at Lancaster University, UK. Her research examines the memorialisation of the ‘disappeared’ in Guatemala, looking at the use of street art, art exhibitions, museums and public events as forms of alternative memorial. Follow her on Twitter here: @KH_Bailey.