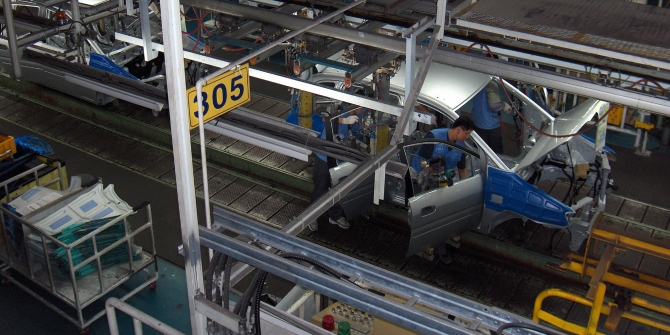 Manual jobs in European manufacturing are being transformed, as blue-collar workers take on more intellectual tasks. This is a consequence of the increasing use of digital tools and the growing importance of quality control in production. The severe losses of medium-paying jobs in the manufacturing sector during the economic crisis raised concerns about its future role and contribution to economic progress. However, not only has the recovery brought back employment growth in manufacturing, but there has also been a shift towards higher-skilled professional occupations, especially in machinery and equipment as well as motor vehicle production (up seven per cent a year since 2013), as described in Eurofound’s 2017 European Jobs Monitor report.

This upgrading of employment in manufacturing is further borne out by Eurofound’s latest report on the future of manufacturing in Europe, which looks at the types of tasks performed by workers on the job. We carried out case studies into five occupations within manufacturing: car assembly-worker, meat-processing worker, chemical products machine operator, hand-packer and inspection engineer. These case studies suggest that intellectual tasks involving information processing and problem solving are becoming more common in manufacturing jobs where physical tasks predominated traditionally.

Two main factors are contributing to this trend, one purely technical and the other more institutional. First is the rising use of digitally controlled equipment in production. This not only requires that workers in manual, semi-skilled occupations have more developed ICT skills, but also increases the literacy- and numeracy-related tasks they have to perform, such as reading technical documentation or dealing with numerical information. The spread of automation and the use of advanced machinery in production is also driving up the importance of problem-solving intellectual tasks, with shop-floor workers being tasked increasingly with troubleshooting production lines and handling errors.

Among the five key occupations analysed, the work of car assemblers has been the most significantly affected by digitalisation in recent decades, both in terms of manufacturing processes (including the development of digital factories that use sensors, algorithms and robots) and customer relationships (with cars becoming more digitised and allowing users to interact with them and evaluate the information collected through specialised applications).

The second factor is the increasing use of quality control and standards in production. This is driven by regulation, consumer demand and the increasing complexity of production processes (as exemplified by global value chains). Quality standards impose a certain degree of formalisation on the production process, with the use, for instance, of benchmarking documentation, detailed planning and performance indicators. Many of these quality-control procedures are at least partly carried out by shop-floor operators, whose task set has broadened to include documenting problems, assessing numerical benchmarks, filling in forms and so on. The work of hand-packers has for instance evolved in response to consumer demand for high-quality packing and delivery, particularly in relation to product traceability. The more experienced and qualified workers have also to be able to perform complex logistical and coordination tasks too (e.g. packing and shipping products on time to many different customers).

Conversely, the importance of physical tasks is generally decreasing because of automation, although the extent of this differs depending on the comparative advantages and efficiency associated with manual versus machine task performance. Tasks that require workers to exert physical strength, in particular, are in decline, but tasks that require dexterity remain an important part of some shop-floor jobs, notably in the context of operating machinery. Among the occupations studied, meat processing workers are the clearest exception to the declining trend in physical tasks: the reason for that being that the processing of meat is difficult to automate because of its inherent variability and it remains too expensive relative to the cost of human labour.

Finally, with regards to social tasks, these are generally more important for services than for manufacturing. The occupations within this study have very little contact with customers or people outside the shop floor, and the social tasks within their jobs are restricted to cooperation with co-workers and some coaching of new or less experienced colleagues. Both meat processing workers and chemical plant operators tend to work alone, so even cooperative task content is relatively limited within these roles.

Such changes have significant implications for job quality. The decline in physical tasks, combined with more restrictive safety regulations limiting direct contact with machinery, has the benefit of reducing physical workplace risks for some manual occupations. This, together with the upgrading of work in terms of intellectual tasks, has contributed to job quality improvements in traditional manual occupations in manufacturing. However, automation technology is not spread equally across industries and is far from becoming mainstream in many jobs where human labour is still preferred, mainly due to the comparatively low costs and the still very significant technical challenges involved in their automation.

The reshaping of manufacturing occupations poses significant challenges for our societies. The skills of the workforce must keep pace with technological change, and education systems have to be modernised to meet the needs of ever-changing workplaces. Employment regulation and industrial relations systems must also evolve to maintain their effectiveness as occupations are transformed; in times of rapid economic transformation such as these, their mediating role becomes particularly important for the translation of technical change into socioeconomic progress for all.

Martina Bisello has been a research officer with Eurofound since April 2014. She completed an international doctoral programme in economics.

Enrique Fernández-Macías is a research manager in Eurofound. He holds a PhD in economic sociology from the University of Salamanca and his main research interests are job quality, occupational change and the division of labour.

Martina Bisello has been a research officer with Eurofound since April 2014. She completed an international doctoral programme in economics.

Enrique Fernández-Macías is a research manager in Eurofound. He holds a PhD in economic sociology from the University of Salamanca and his main research interests are job quality, occupational change and the division of labour.