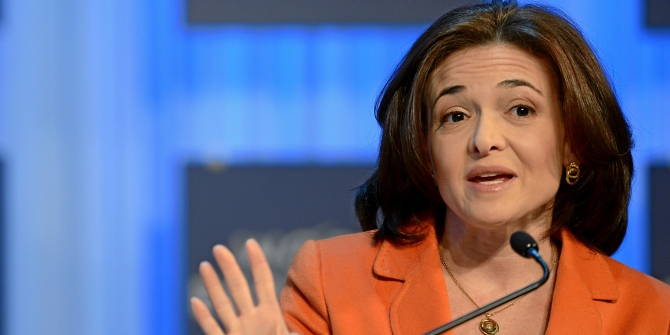 It is well documented that there are few women at the top of organisations. A frequently suggested reason for this scarcity is that women simply lack role models: you cannot be what you cannot see. However, although there may be few senior women who might function as role models in women’s immediate organisational environment, the number of celebrity businesswomen whom women might see as role models is growing. These celebrities often provide other women with advice through autobiographical books that combine self-help with lived experience. For example, Sheryl Sandberg, Karren Brady and Deborah Meaden have published books outlining how they became successful and offering advice on how other women can follow suit.

We were interested in what attributes, skills, characteristics and behaviours are idealised in these books, so we analysed eight books from this genre: 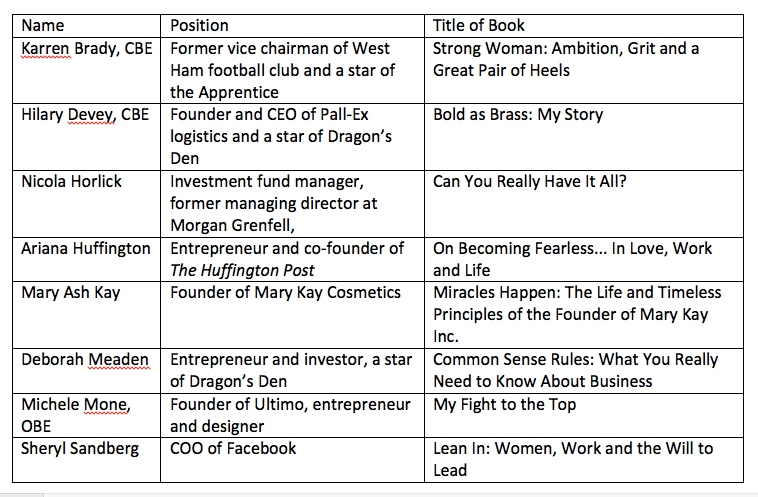 While each book tells a unique story, some common themes recur in all of them. Our analysis reveals that, despite their differences, all the autobiographies draw a picture of an ideal successful woman, whom we call a ‘female hero’. This ‘female hero’ is characterised by three Cs: confidence, control and courage.

Confidence is a central characteristic promoted by these role models, presented as the main way to jump over gendered barriers at work. Most celebrities suggest that women hinder themselves by not ‘leaning in’ or ‘sticking their necks out’. The books are filled with various examples of how growing self-confidence and becoming a ‘can-do’ girl is a crucial ingredient for progression. This ‘just-go-for-it’ mentality suggests that with the right level of confidence, any woman can be as successful as these business celebrities. If she is not, then she only has herself to blame: she is simply not confident enough.

The second ‘ingredient’ for becoming successful is control. The female hero is in control of all aspects of her life – work, life, children, partner, herself – and runs her life with business efficiency through planning and outsourcing. The accounts do not gloss over difficulties. They suggest that being a working mother, especially in a top job, is hard. However, they do present a multitude of strategies for staying on top of things, such as learning to make decisions quickly, giving up one’s social life, planning ahead, and delegating duties to housekeepers, nannies and personal assistants. Women are even encouraged to ensure that they control whom they choose as their life partners. Women themselves are responsible for teaching their husbands to do the dishes and help out with the kids. If women lose control and feel overwhelmed, they only have themselves to blame: they are simply not employing the right strategies.

The third and final characteristic that stands out is courage. The female hero needs courage to persevere in the face of difficulty and to push through gendered barriers. The business celebrities describe various struggles and barriers they have had to overcome, including discrimination and sexism. The books suggest that a woman needs grit, determination and fortitude. She must stop complaining, ‘get on with it’ and courageously push through these issues in the name of business success. Women who lack courage are unable to deal with adversity, so the books imply that women must work on themselves to develop this quality if they want to become successful.

The books adopt a heroic tone, suggesting that although it is tough to succeed as a woman, it is possible with enough confidence, courage and control. It is easy to see why many women who read these books feel empowered by such narratives. Rather than being victims of their circumstances, they are seen as being in charge of making themselves successful. This is appealing, encouraging, and seductive.

This image perpetuated by celebrity role models is problematic. The books focus exclusively on actions that women can take individually, but dismiss the significance of the systemic cultural and structural barriers faced by women. For instance, it is well documented that women’s and men’s behaviours are judged differently. Assertive women are more likely to be seen as aggressive. Competent women are seen as unlikeable. Furthermore, structural issues such as a lack of affordable childcare remain one of the main impediments to women’s career progression. The books acknowledge the existence of such hidden biases and barriers, but suggest that individual changes – such as developing confidence, control and courage – are enough to overcome these. Therefore, the solution offered by celebrity role models is to the fix the woman rather than fix the system – a solution that does not result in sustainable change.

In constructing women as being completely in charge of their own destinies by displaying confidence, control and courage, not only do the systemic barriers that women confront remain unchallenged, but failure becomes an individual problem: they are simply not trying hard enough. This encourages women to search for faults in themselves. The books fail to acknowledge that while women may be able to control certain aspects of their careers, sustainable change will only be possible if unequal systems and structures are altered.

Therefore, as empowering as they may seem, the business celebrities in our study view women, not organisations or society, exclusively responsible for change. This limits their effectiveness as role models. Our analysis indicates that simply having more senior women as business role models may not automatically be helpful for women. Instead, we must look closer at the kinds of values and behaviours that role models promote, in order to ensure that they are effective.

Maria Adamson is a senior lecturer in organisational behaviour and HRM at Middlesex University Business School. Her research interests centres on exploring gender inequality in professional work and organisations. She currently leads an ESRC project on Gendered Inclusion in Organisations. She holds a PhD from the University of York.

Elisabeth Kelan is a professor of leadership and organisation at Essex Business School, University of Essex. Her research interests are gender in organisations, women and leadership, and diversity and inclusion. She has published extensively in leading journals and has written two books. She holds a PhD from LSE.

Maria Adamson is Associate Professor of Organisation Studies at the School of Business and Management at Queen Mary, University of London.

Elisabeth Kelan is a professor of leadership and organisation at Essex Business School, University of Essex. Her research interests are gender in organisations, women and leadership, and diversity and inclusion. She has published extensively in leading journals and has written two books. She holds a PhD from LSE. 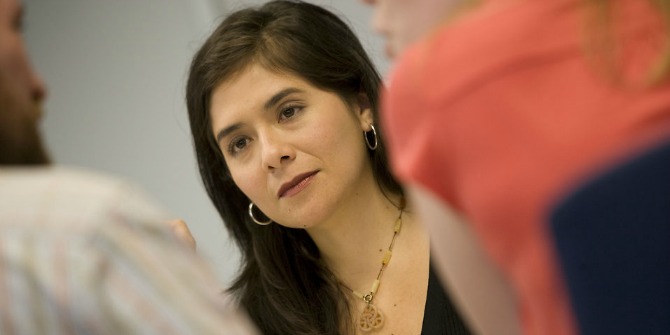