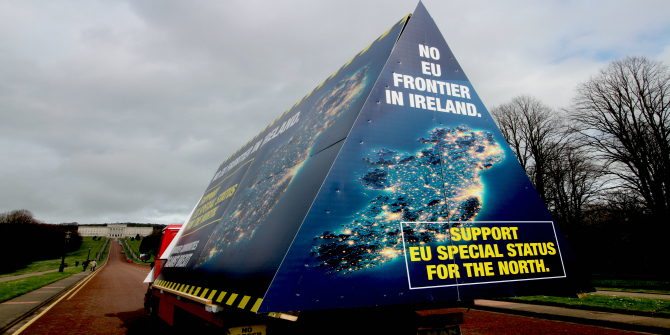 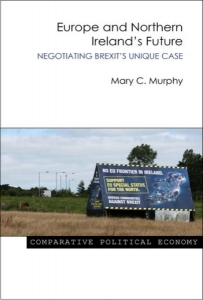 During the summer, I attended the Féile an Phobail (Festival of the People) in West Belfast, where Michelle O’Neill (Vice President of Sinn Féin and leader in the North of Ireland/Northern Ireland) was on a panel talking about ‘Women in the Good Friday Agreement’. When a question arose regarding the absence of Stormont since it collapsed in January 2017 and the political vacuum that Northern Ireland has since faced, O’Neill responded: ‘it would not matter if the executive was back up and running tomorrow, there would still be no agreement.’

With Europe and Northern Ireland’s Future: Negotiating Brexit’s Unique Case, Mary C. Murphy presents a monograph that depicts a multi-layered narrative of Northern Ireland’s political complacency, dispensation and the return of old sectarian divisions since the Brexit referendum vote on 23 June 2016. The book rightly focuses on the Democratic Unionist Party (DUP) and Sinn Féin, both currently drawing power from one-sided political narratives resulting from the collapse of Stormont and the Executive, but also as integral parts of a path to a restored Executive. The DUP, sitting comfortable with a confidence and supply demand at Westminster, are able to promote the narrative that they are still working for the good of Northern Ireland to their base. And Sinn Féin, whose votes were in decline with the growing stability of Northern Ireland, have been reenergised by the Renewable Heat Incentive (RHI) scandal and have formed a new narrative of resistance. Murphy presents a reasoned and detailed analysis of the current state of Northern Irish politics and its relationship with the European Union, which expands the scope of her research to the development and emergence of Brexit and Northern Ireland decisions being produced at a distance and without the voice of an Executive with the intention of making Northern Ireland’s unique case better understood and heard.

Chapter One introduces the contextual setting to adequately understand Northern Ireland’s conflict and its transition as a ‘post-conflict’ society with a devolved legislative assembly. The chapter notes the wider context of British and Irish political relations and its position within the EU. The chapter specifically examines Northern Ireland’s relationship with the EU and the form of EU integration it has experienced. Murphy makes the assertion that Northern Ireland has had a significant relationship with the EU which can be described as largely economic, having provided financial assistance and structural funding which has added more visibility to the EU. Despite the gentle and positive impacts of the EU and its economic relationship with Northern Ireland, it is revealed that there is little engagement from local parties regarding EU perspectives or matters.

In Chapter Two, Murphy supplements her chapter by introducing the reader to the theory of ‘negative peace’, or the absence of violence. Murphy uses this concept to assert that Brexit will be a problem, both economically for the region and of course problematic within both of the communities. Since the Brexit referendum, old sectarian lines have re-emerged from Northern Ireland’s conflict, a stark reminder that Northern Ireland is still a society coming to terms with the legacy of its past. Murphy further examines how the EU was politicised in the run-up to the 2016 referendum and how this itself has undermined Northern Ireland’s cross-party shared pragmatism towards the EU. Therefore, Brexit has created a new stage of contention within the peace process for Northern Ireland politics with parties looking inwards, placing restraints on the political and economic moment delivered by the peace process itself. Murphy herself states that Brexit ‘threatens not only Northern Ireland’s economic future but also its political, social and constitutional stability’ (96).

Chapter Three explores two key issues regarding Brexit and Northern Ireland: constitutional changes in Northern Ireland, such as the Border Poll; and the complex economic implications Brexit presents to the region, the all-island economy under EU integration and Northern Ireland’s dependency on the public sector. Murphy asserts that without a functioning Assembly or a strong and unified cross-party voice, mistrust between the parties will likely fester and create an environment of ‘negative peace’. Strikingly, the most likely to be affected by the current political climate will be the most deprived communities in Northern Ireland, which will be devastatingly affected by a potential economic forestalment after Brexit. Within this chapter, Murphy eloquently intertwines the issues of economically vulnerable people, focusing on those affected by the Troubles, and explores how Brexit decisions implicate deepening economic inequalities for those who are most vulnerable in the communities of Northern Ireland. This is in connection to growing political entrenchment and polarisation on most political issues, which pose the biggest threats to the region’s ongoing peace over the last twenty years since the Belfast/Good Friday Agreement.

Chapter Four transitions to the Brexit negotiations and the different potential scenarios for a post-Brexit agreement. It is clear from Murphy’s analysis that there is no unified position coming from Northern Ireland regarding the negotiation process. Murphy therefore asserts that this has created a narrower negotiation process in working towards a post-Brexit settlement that is palatable to members of Northern Ireland society. The political environment within Northern Ireland has enabled parties to use the proposal for Brexit as a platform for their own constitutional aspirations. To summarise, Republicans/Nationalists are unanimously pushing for EU ‘special status’, with Sinn Féin arguing for a national discussion and the use of the ‘special status’ as a stepping stone to a ‘united Ireland’. By contrast, the Unionists/Loyalist counterparts make the case that Northern Ireland exiting the EU must be on the same conditions and terms as the rest of the UK. Murphy suggests that forming a pragmatic solution for Northern Ireland is complex and made more so by the inactive Northern Ireland Assembly and devolved power-sharing Executive.

In Chapter Five, Murphy contemplates with great detail an idea of what Northern Ireland’s future will be like outside the EU with a comprehensive free trade agreement between the UK, the EU and Northern Ireland. This chapter proposes clear ideas for the reader to digest, giving insight into the different options on the table for political parties and negotiators to think about.

All in all, Murphy shows great sensitivity and intellectual rigour in exploring the lack of political leadership mapping out the above political landscape. This is also shown through Murphy’s acute understanding of Northern Ireland’s political history. Murphy further asserts that things will change from the book following its publication and makes no claim that her work has the exact answer to the turbulent times these societies are dealing with. Criticisms of the book have referred to it not offering much in terms of a theoretical debate (Utz 2018) or the often not talked about middle-ground voters in Northern Ireland. Though these are fair criticisms within the context of our times given the rise of democratic deficits and a growing anti-intellectualism, these do not take away from the value of this material.

In response to O’Neill’s comment quoted at the start of this review, after reading this book it becomes evident why there is no agreement, but with a greater understanding as to why there must be agreement. There is so much on the line not only for the citizens of Northern Ireland, but on the island of Ireland, and only cooperation and agreement can begin to allow the voices of the people of Northern Ireland to be adequately represented and heard during such difficult negotiations. This book is a testament not only to Murphy, but all those who have been leaders in mapping our political emphases and offering advice in how we can move forward when the state itself has failed its people. Research such as this creates impact which should not be underestimated: attempts to answer difficult questions to the issues of our society are needed now within our public discourses.