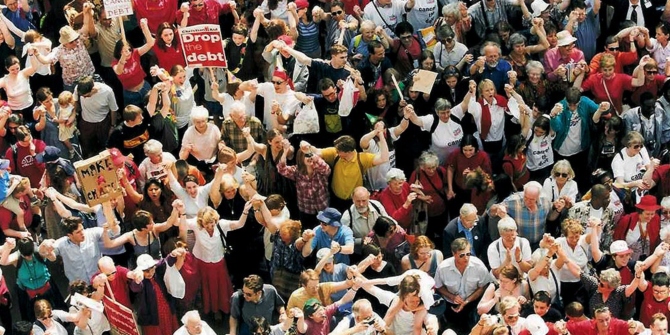 In the second quarter of 2018 global debt reached a new peak, climbing to 260 trillion dollars ($260,000 billion). At the same time, the global debt to GDP ratio crossed the 320 per cent threshold for the first time. Of that total, 61 per cent (160 trillion) is private debt of the non-financial sector, while only 23 per cent is represented by much vilified government debt.

The US alone has issued more than 30 per cent of the outstanding public debt, with an appreciable acceleration in the last two years under Trump management. The US Treasury is followed by the Japanese and Chinese debt agencies and, at a greater distance, by the biggest Eurozone economies. The values reported by Chinese public agencies must be evaluated with caution because of repeated cases of falsification of statistics, even by government officials. It is therefore likely that not only Beijing’s public debt but also that of Chinese corporations, already the highest in the world, could be more alarming than official estimates would suggest.

Historically, the debt of a country, both public and private, tends to grow over time in positive correlation with the size of the economy, with the notable exception of sudden defaults that wipe out large portion of debt. Hence the huge size of total debt cannot provide per se enough information about its sustainability. Nor is it possible to infer that low total debt is a sign of financial stability. Indeed, it is more likely that a very low level, or even the absence of debt, would imply a complete lack of confidence such as to exclude all national economic agents from international credit markets, as was the case in Argentina in the five years following the dramatic 2002 default.

In a proper perspective, a fair assessment should take into account the size of the debt relative to GDP (see Figure). 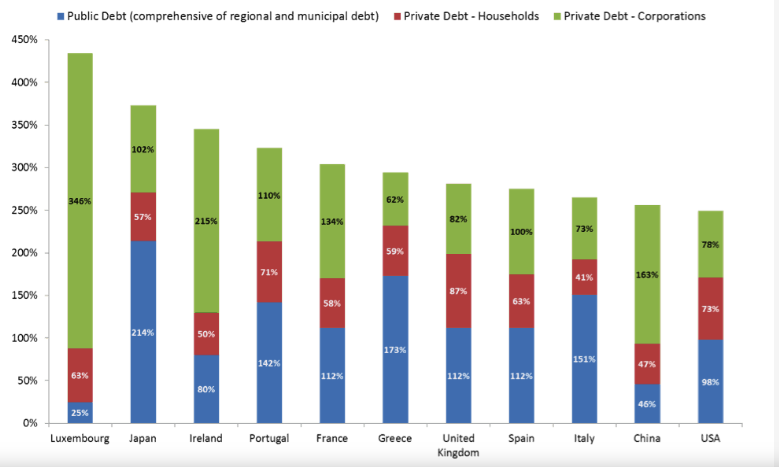 Global rankings, by using this more suitable measure, are reversed: Luxembourg ends up in first place with a total debt equal to 434 per cent of GDP, almost all composed of corporate debt. At a distance, we observe Japan’s debt total hovering at 373 per cent characterised by a preponderant weight of the public component (216 per cent). The high incidence of both public and private debt places France, Spain and the United Kingdom in the top eight while Italy appears only in 9th place, with a well-balanced total debt ratio of 265 per cent of GDP, due to low household and corporate debt that offsets the impact of consistent public debt.

But even a limited debt-to-GDP ratio cannot be considered a sign of virtue or economic health. At the bottom of the rankings stand out the paradoxical cases of Argentina and Turkey. Although both countries have total debts under control (private debt virtually non-existent in Argentina and Turkish public debt at the ridiculous value of 28 per cent of GDP) they are still in danger of losing access to markets due to a currency and balance of payments crises. In a glaring apparent paradox, short-term interest rates are at 70 per cent in Argentina’s low-debt financial environment and stably negative in the Japan of the monstrous debt.

Referring only to public debt to issue judgments about the state of an economy, perhaps in relation with arbitrary thresholds, is always a bad practice that leads to erroneous conclusions. The criteria that the market uses to assess the debt’s solvency are multiple: the percentage of debt held by foreign/domestic investors, the fact that the debt is issued under national/foreign law, the growth of the economy, the financial wealth of citizens, the efficiency of tax collection, monetary sovereignty etc. In the case of Japan, for example, 90 per cent of the debt is in the hands of the central bank, pension funds and domestic banks and is almost perfectly offset by the consistent financial wealth of public institutions. It is almost impossible to imagine a confidence crisis that would cast doubt on the solvency of the Japanese government.

Likewise, the fact that Eurozone countries are unable to manage monetary policy autonomously transforms all public debt de facto as if it were subjected to foreign law, a condition that is enormously more complex to handle. Moreover, this debt is on average to the tune of more than 70 per cent held by foreign investors, a category by definition more reactive in negotiating on secondary markets and in feeding generalised panic selling.

There’s more. Official statistics do not consider the troubling issue of “implicit debt”, i.e. the burden represented by the present value of financial commitments made by governments on pensions and healthcare. In general, these future debts do not appear in the national accounts for well-founded reasons connected to the difficulties in estimating costs spread over very long time horizons. If these hidden charges were to be taken into account, US debt would, for example, quintuple to over $100 trillion. But Spain, Luxembourg and Ireland would be in the worst shape, since they would see their liabilities rise by more than tenfold, up to over 1000 per cent of GDP in the Irish case. On the other hand Italy, from the point of view of implicit debt, under current legislation is the most virtuous European country.

At a global level, corporate debt is the variable that markets fear most. A heavily indebted private sector is vulnerable to increasing interest rates, after years of artificially low rates that have favoured loan expansion and the reduction of corporate equity via massive share buybacks. The inherent instability of debt versus equity funding suggests that the next slowdown in growth could develop into an unusually strong freeze of corporate investments. In Italy that already happened during the Great Recession of 2008-2009: for each percentage point of decline in credit growth, a four-point contraction in investments followed in enterprises most dependent on bank credit; two points in those financially more independent. An economic disaster not to be repeated.

Marcello Minenna is head of the quantitative analysis unit in Consob (the Italian Securities and Exchange Commission). He has also taught quantitative finance at Bocconi University and at the London Graduate School of Mathematical Finance. He is a regular writer for The Wall Street Journal and for Corriere della Sera as well as member of an advisory group that supports the economic analysis of the biggest Italian trade union CGIL.