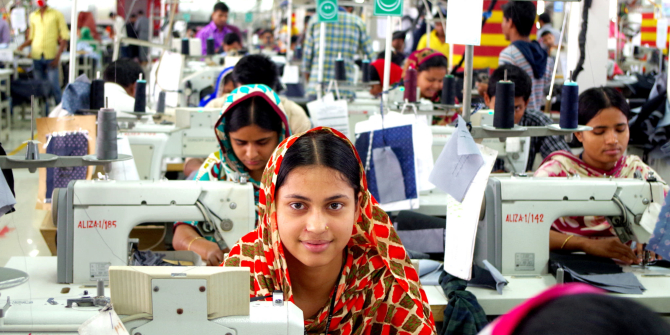 Disasters often catalyse new regulatory initiatives by exposing the human costs of inadequate worker or public protection. The Rana Plaza building collapse in Bangladesh in 2013, which killed 1134 garment workers, was no exception. Horrific scenes of carnage brought the “race to the bottom” into the living rooms of Western consumers and prompted a rapid reaction by the global garment brands and retailers sourcing from Bangladesh in the form of two new regulatory initiatives, the Accord on Building and Fire Safety in Bangladesh and the Alliance for Bangladesh Worker Safety. Both initiatives involve independent inspection of all Bangladeshi suppliers of participating firms and robust enforcement of corrective action plans (CAPs).

The Accord, a legally binding agreement negotiated with Global Unions and the larger of the two initiatives, has been widely hailed as a breakthrough in global labour governance. But although the Accord was renewed at the end of its five-year term, with 193 brands signed up to the ‘2018 Accord’ at the time of writing, the Bangladesh High Court is currently threatening to close the Accord Dhaka office, with its fate unclear at the time of writing. This has prompted multi-stakeholder initiatives such as the Ethical Trading Initiative, which brings together firms, unions and NGOs to appeal to the Prime Minister of Bangladesh, arguing that while the Accord has helped “transform” safety standards, its work is far from finished. Here we ask, has the Accord been the success its signatories claim, and if so why is the Bangladesh government seemingly opposed to its continuation?

For our research, we interviewed 152 Bangladeshi garment factory managers and surveyed 1500 Bangladeshi garment workers (1000 women, 500 men), who were interviewed at home. Since many factories are shared, our results do not distinguish between the Accord and the Alliance. The overwhelming majority of factory managers (81 per cent) said that the most important change in the industry since Rana Plaza was improved safety. They also saw commercial advantages to this. Both Accord and Alliance members made a commitment to continue sourcing from Bangladesh, at a time when the industry feared for its future. Now managers see the improved safety demanded by the Accord and Alliance as a potential selling-point. As one manager put it, “I think it’s a competitive advantage because Bangladeshi manufacturers are able to say that we are the safest garment industry in the world.”

Meanwhile, workers also reported that factory safety has improved. The overwhelming majority of workers in Accord and Alliance (AA) factories (96 per cent) said they felt safe in their factory. Meanwhile, 90 per cent reported that they could refuse to go into the factory if the building was perceived to be unsafe. This represents an important transformation in safety culture, as notoriously other employees in the Rana Plaza building were evacuated after huge cracks appeared, but the garment workers were forced to return after initially fleeing. This change may in part reflect the fact that workers have received health and safety training through the Accord and Alliance (90 per cent of workers surveyed at AA factories). In a potential positive spillover, AA factories also reported better wages, working conditions, health and safety as well as scope for voice.

Why then do the government and the industry association of the garment manufacturers and exporters (BGMEA) appear to oppose the continuation of the Accord’s work? Our interviews with garment manufacturers participating in AA programmes suggest some reasons. Factory managers complain that they are expected to implement costly safety improvements without financial assistance. None of our respondents reported receiving loans or other forms of help with safety improvements. We cannot exclude that some firms outside our study were more fortunate, but nonetheless the typical experience of firms was clearly a long way from the commitment of Accord signatory Brands “to ensure sufficient funds are available for remediation“.

As one manager put it, “I resent the buyers for their insensitivity to suppliers’ problems and for their reluctance to share the costs of complying with Accord requirements. The buyers have never come forward to help me on compliance issues. They always say, ‘it is your problem, not mine’. They do not advance us loans in order to carry out the CAPs or even commit to giving us guaranteed orders.” The difficulty of complying without support was felt especially acutely by small and medium-sized firms. Moreover, firms also reported that the prices paid for garments by buyers were decreasing rather than increasing despite increased costs.

Such resentments are exacerbated by the fact that participation in the Accord and Alliance has now become almost a necessary “license to export” to the EU and US. Bangladeshi managers emphasised that they had “no choice” but to comply with the demands of the Accord and Alliance to maintain relationships with their buyers. While this has been positive in terms of ensuring that necessary safety improvements are made, the interfirm cooperation entailed in the Accord does also intensify power differences between buyers, whose power is concentrated by the initiative, and local suppliers.

These experiences of continued price pressure and lack of support from buyers reflect the fact that core elements of the garment business model remain unchanged. This is also revealed by workers’ experiences. Despite safety improvements, workers reported dissatisfaction with low wages, continued compulsory overtime and abusive management (see Figure 1). 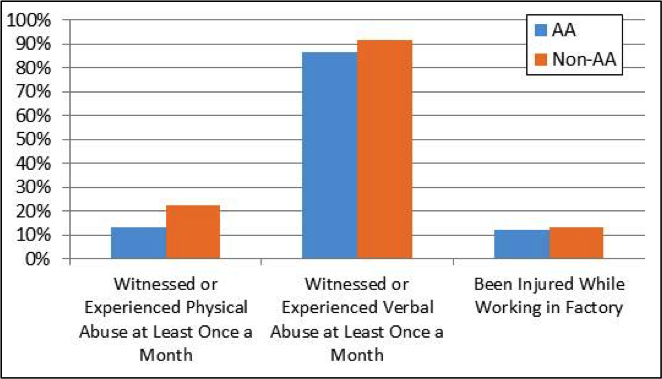 Note: Worker injuries are only counted for workers who started in 2014 or later (1354 workers) as reported injuries by more experienced workers may have taken place before the Accord and the Alliance were implemented.

Since Rana Plaza leading brands and retailers have been experimenting with new approaches to managing relationships with suppliers and ensuring the well-being of workers in the industry. Increased transparency of supply chains is one example of this (see Figure 2), as are examples of interfirm and union cooperation such as the Action Collaboration Transformation (ACT) initiative on living wages. But firms have so far not found a way to raise labour standards within a highly competitive low-margin industry reliant on cheap mainly female labour. As recently noted by Mary Creagh MP, chair of the UK parliamentary Environmental Audit Committee, even UK garment manufacturers are being forced to pay illegally low wages because of the pressures of the fast fashion model. Meanwhile, retailers themselves face challenges, with prominent high street brands being forced to close stores. Consumers, many facing a prolonged squeeze on their living standards, are also unlikely to provide the answer: research shows that while large majorities of consumers say they are willing to pay a price premium for ethically produced goods, only 5 per cent or fewer have actually done so. 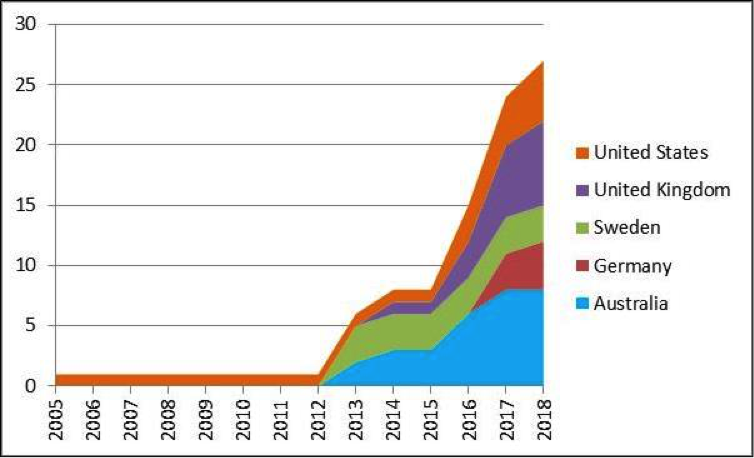 Note: Top 10 brands and retailers by revenue are considered for each country.

In these conditions the most promising solutions are those which provide a level playing-field either through collective action within the industry or state regulation. The Accord has been a “game-changer” which has saved lives. Closing down its office would be a mistake which would tarnish the hard-won reputation of the Bangladesh garment industry post-Rana Plaza. But the lack of ‘shared responsibility’ between industry participants is a weakness of the model, which fuels opposition. Future initiatives need to address this issue in order to secure buy-in from producer countries and ensure the sustainability of labour standards improvements.

Naila Kabeer is professor of gender and development at LSE’s department of gender studies and department of international development. Her research interests include gender, poverty, social exclusion, labour markets and livelihoods, social protection and citizenship and much of her research is focused on South and South East Asia. Naila is currently involved in ERSC-DIFD funded research projects on gender and labour market dynamics in Bangladesh and India.

Rachel Alexander is a research officer working on the garment supply chain governance project. Rachel holds a PhD in development policy and management from the Global Development Institute, University of Manchester and an MA in community development and environmental studies from the University of Toronto.