There's early evidence that the legalisation has been successful in crimping the 'black' economy, write Charles Goodhart and Jonathan Ashworth

Canadian Prime Minister Justin Trudeau announced on June 20th 2018 that recreational cannabis would become legal in Canada as of October 17th. The major social policy change formed part of the general election platform for Trudeau’s Liberal Party in 2015, which suggested that “To ensure that we keep marijuana out of the hands of children, and the profits out of the hands of criminals, we will legalise, regulate, and restrict access to marijuana”. Canada is the first major developed nation to have legalised recreational cannabis use. It is now also legal for recreational purposes in ten US states and could be legalised in a number of others this year. At the country level, Uruguay legalised it in 2013 and the move is under consideration elsewhere, with Mexico likely to legalise it soon and New Zealand due to hold a referendum in 2020.

A relatively significant proportion of Canadians are regular cannabis users. According to the 2017 Canadian Tobacco, Alcohol and Drugs Survey (CTADS), almost five million or around 15 per cent of Canadians over the age of 15 report smoking cannabis in the previous twelve months, which is the same as the share of the population that report smoking tobacco. Meanwhile, the proportion reporting using at least one other illegal drug excluding cannabis is much lower at just over 3 per cent (Figure 1), with cannabis users being the predominant consumers of other illegal drugs. Given that cannabis use for recreational purposes was illegal at the time of the surveys, the usage numbers could actually be an underestimate.

Figure 1. A similar proportion use cannabis as tobacco in Canada 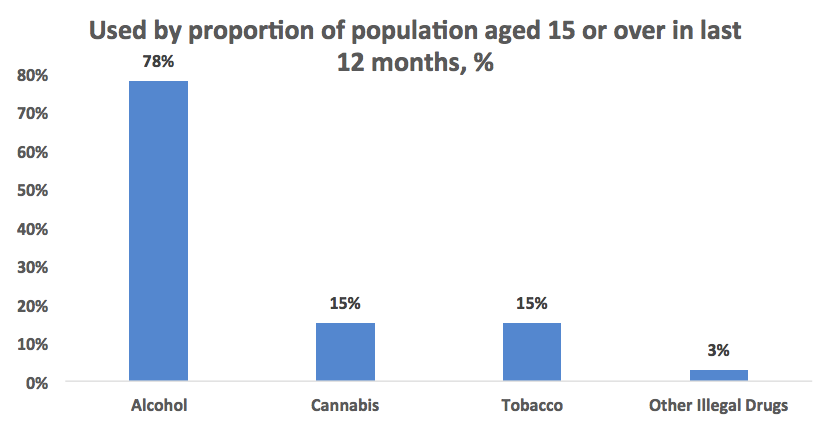 The amount spent by Canadians on cannabis in 2017 was estimated by Statistics Canada to be around C$5.5 billion (Figure 2), with the black market in recreational use estimated to be around 90 per cent of that, or around C$5 billion (the remainder being legal purchases for medicinal use). This compares with spending of around C$23 billion and C$17 billion on alcohol and tobacco respectively. Statistics Canada estimates that legal consumer spending for cannabis will range between C$0.816 billion and C$1.018 billion in the fourth quarter of 2018 (C$3.85 billion-C$4.8 billion annualised), with around 25 per cent of the market remaining illegal.

Figure 2. Cannabis market is over C$5 billion in Canada 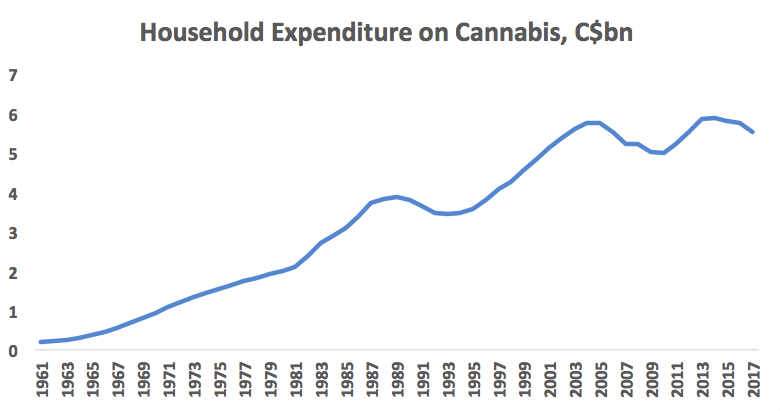 Prior to the legalisation, almost all retail purchases of recreational cannabis are likely to have been made in cash. The basic idea is that, given the illegality, almost all shadow economy (black economy plus grey economy) transactions will be made in cash. The black economy is defined as consisting of illegal activities, (e.g., drugs, prostitution), while the grey economy is defined as otherwise legal activities that are deliberately not recorded in order to avoid or evade taxation (e.g. a builder failing to properly report part of his/her income to the authorities). The fact that cash is an anonymous instrument makes it the payment mechanism of choice for those who do not want their transactions to be recorded and capable of being used in evidence against them. In contrast, almost all electronic forms of payment leave a record.

Tracking developments in the value of cash in circulation can provide some insight into the impact cannabis legalisation has had on the black economy in Canada. Slower growth in the value of cash in circulation or actual declines would support the view that legalisation has hit the black economy. This is because most new legal purchases of cannabis are likely to occur through electronic payment channels e.g. debit/credit cards, similar to general payment trends for other legal items. For example, according to Payments Canada, in 2016 cash accounted for just 31 per cent of Canadian total payment transaction volumes down from 42 per cent in 2011.

Despite cash’s rapidly diminishing role as the payment mode of choice for transactions, both in Canada and the rest of the world, the amount of cash in circulation has actually been rising significantly across most economies over recent decades, particularly since the global financial crisis (GFC). In a forthcoming paper, we suggest declining interest rates and a sharp rise in the size of the grey economy have been key drivers. Exhibit 3 highlights the fact that cash in circulation has been rising rapidly in Canada too. The pace of year-on-year growth has moderated since the legalisation of cannabis, however, from 7.3  per cent in September to 5.3 per cent in both October and November.

Figure 3. Currency in circulation has generally been growing at a solid clip 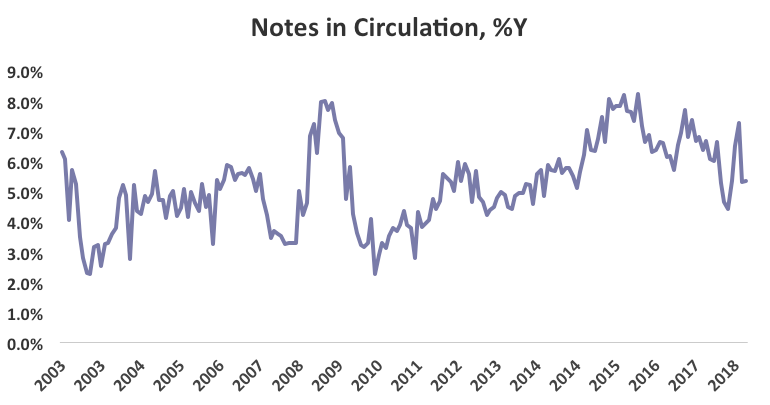 Looking at the actual value of the amount of currency in circulation and the month-on-month changes can provide us with a somewhat clearer picture of the impact of cannabis legalisation though. As Figure 4 highlights, there was quite a sharp fall in the non-seasonally adjusted value of notes in circulation around the time of cannabis legalisation on October 17th with falls of 0.9 per cent (C$0.8 billion) and 0.7 per cent (C$0.6 billion) in the week before and after legalisation respectively. Given that the date of legalisation had been announced in June, one suspects that some of the fall in the week before legalisation may have been driven by consumers holding off normal purchases until they could be made legally a week later. Figure 5 highlights the fact that the value of notes in circulation fell by around 1.4 per cent (C$1.2 billion) in October as a whole, which compares with decent rises every October over the past decade. Meanwhile, looking at Figure 6, which also shows the monthly percentage increases in September and November, it does not appear as though October’s sharp fall was perhaps a response to an uncharacteristically large increase in the previous month, while neither has it unwound with a big rise in November.

Figure 4. Sharp fall in currency in circulation around cannabis legalisation 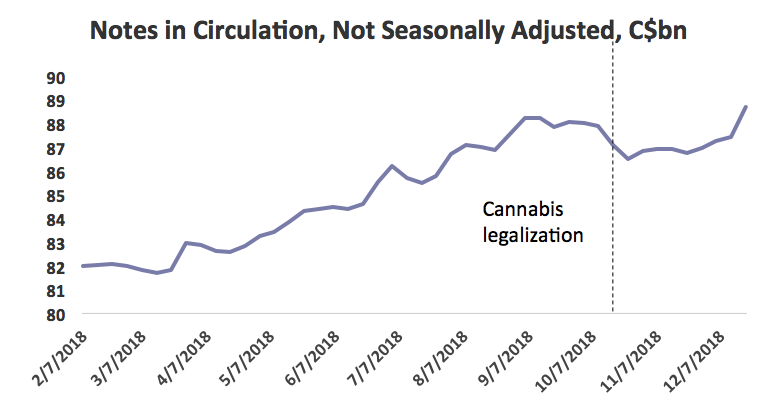 Figure 5. The fall in October was particularly large and contrasts with average monthly gains of 0.4 per cent over the past five years 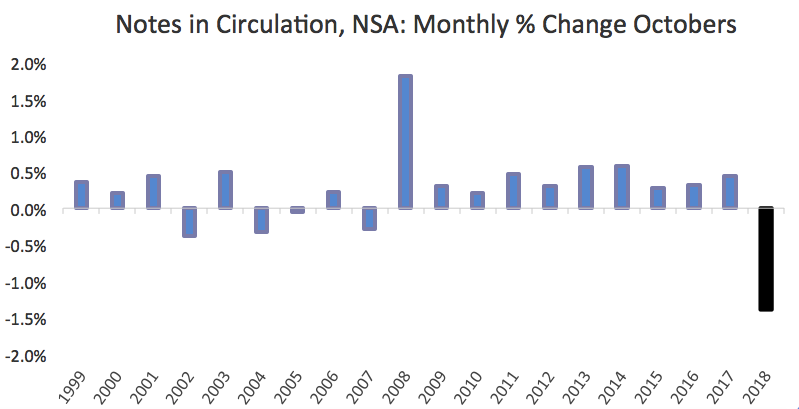 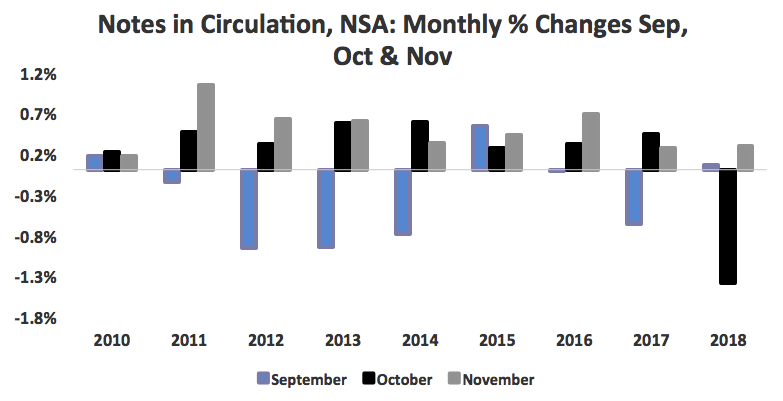 The movements in cash in circulation around the time of cannabis legalisation would seem to provide early evidence to suggest that Canadian Prime Minister Trudeau’s policy has already been successful in crimping the black economy. The fall in currency in circulation of C$1.2 billion in October was broadly in line with Statistics Canada’s estimate of likely legal spending on cannabis by consumers in 4Q. Clearly, changes in cash in circulation are a rather crude measure of changes in the size of the black economy, but they do provide some evidence in support of the expected move of the majority of cannabis users from the black to the official economy.

If around one-quarter of the cannabis market remains illegal (as estimated by Statistics Canada for 4Q 2018) or even slightly less over time, the legalisation of cannabis could over time reduce the size of the total underground economy by around 4 or 5 per cent, with possibly some upside if switching to legal outlets for their cannabis purchases also leads some users to buy less of other illegal drugs. Admittedly, there is significant uncertainty around any such estimate given the many assumptions involved. Meanwhile, the legalisation of cannabis is likely to have fuelled a much larger decline in the total size of the black economy.

Charles Goodhart, CBE, FBA is Emeritus Professor of Banking and Finance with the Financial Markets Group at LSE, having previously, 1987-2005, been its Deputy Director. Until his retirement in 2002, he had been the Norman Sosnow Professor of Banking and Finance at LSE since 1985.  Before then, he had worked at the Bank of England for seventeen years as a monetary adviser, becoming a Chief Adviser in 1980.  In 1997 he was appointed one of the outside independent members of the Bank of England’s new Monetary Policy Committee until May 2000. Earlier he had taught at Cambridge and LSE.  Besides numerous articles, he has written a number of books, such as The Basel Committee on Banking Supervision: A History of the Early Years, 1974-1997, (2011), and The Regulatory Response to the Financial Crisis, (2009).

Jonathan Ashworth is an independent economist. He previously worked as a global and UK economist at Morgan Stanley and has held economist/global macro strategist positions at Barclays Wealth. He has also worked as an economist in the productivity and structural reform team at Her Majesty’s Treasury, where he did work on the famous “Five Tests” of whether Britain should join the euro. He has a MA degree in economics from Duke University and a first class honours degree in economics from Hull University. His academic work has been cited by major global institutions such as the IMF, OECD, BIS, BoE and the ECB.