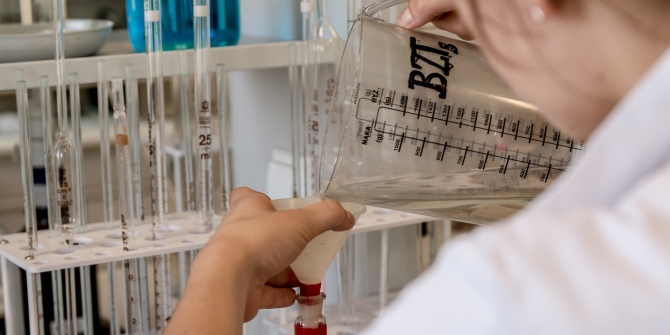 We examine the effect of capitalisation versus expensing on the amount of UK firms’ research and development (R&D expenditures). We focus on the years immediately before and after the UK switched from the UK Generally Accepted Accounting Practice (UK GAAP) to International Financial Reporting Standards (IFRS) in 2005. Under UK GAAP, firms had the option to capitalise or expense development expenditures; under IFRS, development expenditures must be capitalised.

Thus, firms that had capitalised development expenditures under UK GAAP continued to do so, while firms that had expensed them were required to switch to capitalisation. We refer to these two groups as “capitalisers” and “switchers”, respectively. The accounting change, therefore, was a “quasi-experiment”, an exogenous event that affected some firms but not others. Based on this event, we conduct a difference-in-difference (diff-in-diff) analysis comparing the amount of capitalisers’ vs switchers’ R&D expenditures in the years immediately before vs after the UK switched to IFRS in 2005.

By comparing how the R&D expenditures of the two groups changed at exactly the same time, we can control for any economy-wide effects common to all firms. Thus, regardless of why firms initially choose to capitalise vs expense R&D, if the accounting method affects expenditures, the exogenous change should reveal this.

Understanding the real effects of accounting policies is a fundamental issue for both academics and policymakers. While researchers have examined the economic consequences of various accounting policies, there is no reliable evidence for research and development (R&D). The accounting policy issue is especially important for R&D, because of concerns that the accounting method may affect the amount of firms’ R&D investments, and thereby affect innovation and economic growth. Because of its importance, there has been a large debate about accounting for R&D in the U.S. Moreover, R&D accounting is one of the main differences between US GAAP and IFRS, and it is important for U.S. regulators to see the effects of R&D capitalisation in a major capital market. Thus, we provide empirical evidence on this important issue.

Why might capitalisation vs expensing affect firms’ R&D expenditures?

The underlying assumption of our research is that the effect of the accounting method on expenditures works through income. For example, since compensation contracts and covenants are based on reported income, firms would spend less under expensing, since it negatively impacts the “bottom line”. To provide evidence on this channel, we examined firms’ remuneration reports, which are contained in the annual report and provide information on firms’ executive compensation plans, usually including a discussion of the specific performance metric(s) used in the annual bonus and long-term incentive plans. We did not find evidence on firms’ adjusting the performance metric used in compensation contracts for the impact of accounting for R&D.

To understand firms’ decision to expense or capitalise R&D before mandatory capitalisation, we took four approaches. First, we interviewed a former senior technical partner from PwC. Second, we analysed 71 firms’ comment letters sent to both the Accounting Standards Committee (ASC) in the UK and to the International Accounting Standards Committee (IASC). As a third approach, we estimated a Logit model over the 1991-2004 period to understand firms’ capitalise-vs-expense decisions. Finally, for our fourth approach, we examined all UK firms with R&D data from 1990-2004 to establish whether they switched either from capitalising to expensing, or from expensing to capitalising and to determine the link between the switch and profitability.

The central messages of these analyses are twofold. First, we find evidence consistent with increased income being the mechanism through which the accounting method affects expenditures, by showing that switchers’ compensation contracts do not undo the effects of capitalisation. Second, firms prefer expensing for many reasons: the (non) disclosing of proprietary information (percentage of costs capitalised vs expensed) and avoiding write-offs (admissions of failed projects). So, expensing was the “default” choice, and only firms that needed the expense deferral to boost earnings would capitalise.

Thus, under UK GAAP the firms that benefit the most from capitalisation chose to capitalise. For other firms, the negative aspects of capitalisation, clearly outweighed the benefits. That is, for many firms the benefits of being an expenser (e.g., not revealing proprietary information and avoiding write-offs) clearly outweighed its costs (e.g., the reduction in net income). As firms are required to capitalise under IFRS, there are no negative perception costs. We conjecture that as firms switched to capitalisation under IFRS they increased their R&D expenditures which were previously reduced to mitigate any negative impact on profitability.

Consistent with arguments that expensing’s deleterious effect on income causes firms to reduce their R&D outlays, we find that switching firms increased their R&D expenditures more than firms that continued to capitalise. We subject our results to numerous robustness tests: including firms that continue to expense their R&D under IFRS, comparing early vs late switchers, switchers with high vs low R&D expenditure growth, examining R&D behaviour in the last year before IFRS adoption, examining the behaviour of SG&A expenditures, a placebo test in which we alter the switch date, tests which exclude the financial crisis period, including a control for other IFRS changes, quantile regressions, examining firms with high vs low R&D intensity, and entropy balancing to guarantee similar groups. Across all of these tests, our results support the conclusion that the accounting method affects the amount that firms invest in R&D.

Our results attest to the real effects of accounting policy on firms’ R&D investments, and thus to the importance of accounting methods. An important issue for future research to examine is whether the increased R&D expenditures result in increased innovation, such as more patents. We take the necessary first step by showing that R&D accounting affects the amount that firms invest. Our research fits Kinney’s (1986, pg. 339) definition of having practical relevance: “Does how we as a firm or as a society account for things make a difference?” Our answer for R&D accounting is “yes, it does”.

* This is a slightly modified version of a definition found on the Business Literacy Institute site.

Dennis Oswald is a visiting assistant professor of accounting at the Ross School of Business (University of Michigan), where he has been based since September 2007. He got his Phd and MBA from the University of Chicago and an MSc. in economics from LSE (accounting and finance, with distinction, 1995). He regularly teaches at London Business School.

Ana Simpson is assistant professor of accounting at LSE. She received her PhD from London Business School. Her research interests are accounting for intangibles; executive compensation; earnings management; voluntary disclosure – incentives and consequences; and financial analysts. She serves on the editorial board of Accounting and Business Research and the Scientific Committee of the European Accounting Association.

Paul Zarowin is professor of accounting at New York University’s Stern School of Business. He has a PhD and an MBA from the University of Chicago. He has won numerous research awards, including the New York University Presidential Fellowship, the Peat Marwick National Research Fellowship, and the Glucksman Institute Fellowship. Professor Zarowin’s research focuses on the relation between stock market prices and financial accounting data. He has studied how and why this relation varies over time and across firms, and how factors such as firms, regulators, and the economic environment affect the relation.