After wealthy figures from Silicon Valley and Wall Street entered the space, bitcoin is no longer treated as a currency, writes Christopher J. Lawrence 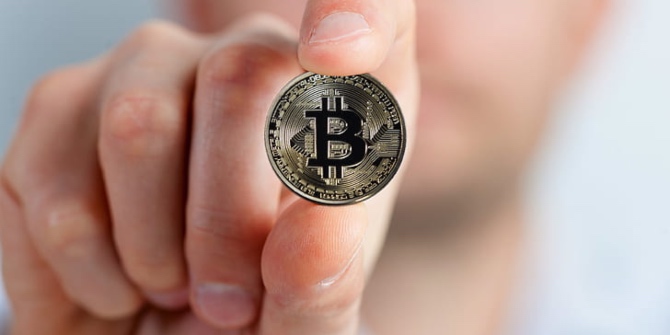 While attending the 2019 American Sociological Association annual conference in New York, I came across an advertisement that nicely captures the competing visions within the bitcoin community. The ad (Figure 1) depicts a scene from the American Revolution, illustrated in pointillist style to evoke American paper currency. A slogan, “The revolution needs rules,” overlays a throng of white men, each eager to participate in this new political project. If order must follow insurrection, given the ad is for a bitcoin-related company the implication is that the time has come for bitcoin — a radical form of money — to play by the rules. The problem, of course, is the lack of consensus over what those rules are and who gets to make them. 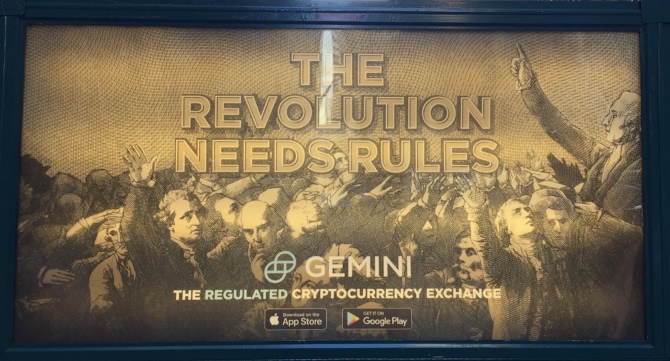 For bitcoin’s pseudonymous creator, Satoshi Nakamoto, and the project’s early adopters, the “rules” consisted purely of and in computer code—features meant to preclude the folly of human meddling. Individuals, especially government officials, were responsible for inflating currency and rehabilitating some of the worst actors in the financial sector. Better money, then, required a completely different monetary system, one where money wasn’t created “out of thin air” by lending and administered by central banks. Big, political institutions were the problem because they interfered with the “natural” process by which money arose within markets wherein a commodity, such as grains of salt or seashells, served as a practical medium of exchange. As Austrian economist Carl Menger noted in 1871, the governing of nation-states was anything but essential to this process. These principles are foundational to the Austrian School’s theory of money. The theory is also reflected in the bitcoin software and ecosystem: A non-governmental entity mints a limited number of tokens, which should prevent inflation, and the value of these tokens is determined by their practicality in the marketplace.

For many gold enthusiasts, libertarians, and anarcho-capitalists, bitcoin had the potential to develop into a viable stateless currency, one complementary to our era of digitised commerce.  In his white paper for the project, Nakamoto describes a bitcoin ecosystem of “commerce,” “transactions,” “payments,” “payers,” and “payees” devoid of an unaccountable human authority. Bitcoins were to be modern seashells, valuable because the network that backed them was superior to monetary financial institutions.

That didn’t pan out. In general, individuals are not using their bitcoins in commerce. Rather than treating bitcoin as a medium of exchange for goods and services, they swap national currencies like the US dollar for bitcoins, which they then hold onto. Why hasn’t bitcoin been adopted as a currency? Glaring reasons include the transaction fees, the volatility in bitcoin’s price, and the awkwardness and novelty in denominating items in bitcoin (“BTC”). For example, a $3 cup of coffee would cost .00029 BTC. Of course, mobile apps that make these conversions are readily available, but merchants never grew accustomed to equating their wares in something other than that of their home country’s currency.

Other reasons for bitcoin’s lack of utility as a currency are more theoretical. As sociologist Viviana Zelizer has argued, the meanings of money are varied and changeable. Thus, money need not always be a state institution. Just as one pile of US dollars may be earmarked for a child’s college and another for the monthly rent, depending on who is asked, money could be national currency, food stamps, prison scrips, and digital currency like bitcoin. As Zelizer notes, these conceptions are embedded within a network of social relations, where multiple parties enact what money is to them. Therefore, the US government may decree that the US dollar is a currency, but such a rule carries no weight if US citizens do not use the dollar in everyday transactions. Similarly, the answer to the question “what is bitcoin?” is subject to change and has changed. In its early days, bitcoin was treated as a method of payment, namely for drugs on the Silk Road website. In accordance with Austrian monetary theory, bitcoin emerged in a market where it had a practical use, where actors wanted to purchase drugs (and sometimes other illicit goods) from the comfort of their homes and without revealing any personal information. At this time, from 2009 to mid-2011, the bitcoin ecosystem was quite small, consisting mainly of cryptographers and laypersons interested in using the “dark web” for near anonymity.

However, this soon changed. In June of 2011, bitcoin entered the mainstream news cycle, centered on its association with Silk Road and a hack of the largest fiat-bitcoin currency exchange, Mt. Gox. Though the coverage emphasised these scandals, a handful of entrepreneurs and investors from Silicon Valley and Wall Street ascertained the “real story” behind bitcoin — blockchain technology, a legitimate triumph in record-keeping. These actors from the world of finance, notably, did not share the hardline anti-state beliefs that the initial bitcoin adopters held. In fact, the opposite was true: They understood that for bitcoin to survive in any way, and for them to profit from the project, state officials would need to come to see bitcoin as something other than a threat to national security (through the financing of terrorism) and a competitor to the central bank’s monopoly on money.

As the first bitcoin companies struggled to meet consumer demand and fulfill federal and state licensing requirements, savvy investors moved their money to bitcoin startups where all parties involved intended to work with government regulators. Such a move did not suggest “doing whatever the state said.” Economic elites appreciate the fact that traditional finance and the state are allied in their reenactment of financialised capitalism (Carruthers and Kim 2011), one where the state supports liberalised markets fueled by the state’s own funding instruments. Disrupting this agreement with a radical currency like bitcoin would not stand, as now-defunct digital currency projects such as Liberty Reserve and e-gold could attest. Thus, by the time the US government was ready to address bitcoin, actors outside of the radical bitcoin circles — financiers, lawyers, and academics — had already made inroads with representatives from Congress, the Department of the Treasury, and other agencies. In private meetings and public hearings, this new crop of bitcoin representatives positioned bitcoin not as a currency, but as a technology, and that stifling it now would give an edge to businesses in other countries developing products based on blockchain technology.

In March of 2014, the IRS declared that bitcoin was, in fact, not a currency, but property. Everyone, from the anti-state actors to the mainstream investors, who bet big on bitcoin early has made a handsome profit. And for bitcoin’s strongest proponents, evidence supports that it has been a successful store of value in the long term. For success as a viable currency, however, the bitcoin case suggests that radical anti-state proponents, ironically, would need to ally with government officials who also embrace the technology as a currency rather than another type of asset. That, or such proponents must maintain an understanding—and perhaps enforce it through user agreements or the project’s protocol or both—that the digital currency is to be used as a method of payment and not something to hoard, or “HODL”. In this context the state would object. The upshot here is that revolutions don’t “need” rules, though they can benefit from them. What revolutions need, of course, is a common goal, and one that by its very nature is abhorrent to the state. Along the way, bitcoin’s common goal was compromised, and what’s left is a new asset class —“cryptocurrencies”— rather than stateless money. Nevertheless, in this fragile political economy, one should expect another radical currency project—based on blockchain technology yet with a unique set of rules—to not simply emerge but gain adoption with greater verve.