It is not clear where manufacturing data is recorded, and there is most likely some degree of underreporting, write Diane Coyle and David Nguyen 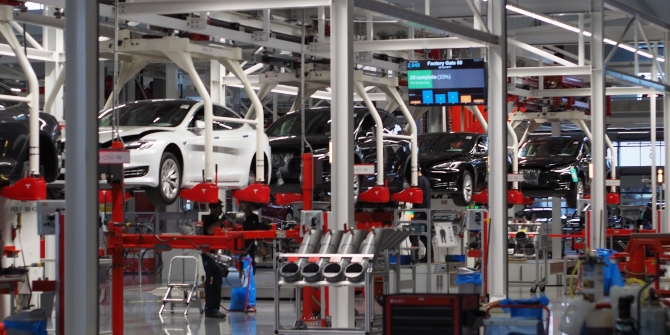 Did you know that Mercedes does not actually produce its heavy-duty G-Class? To be fair, it does keep design, development and marketing of the SUV in-house, but the vehicle is entirely built in the factory of Magna Steyr, a contract manufacturer based in Graz, Austria. In the same plant one will also find entire production lines for the Jaguar I-Pace and E-Pace, as well as BMW’s Series 5. They are all produced as part of contract manufacturing arrangements and subsequently shipped to their final owners, which could be anywhere around the globe.

The most famous example of this type of ‘manufacturer’ is of course Apple. It famously engraves the iPhone as being “designed in California”, while the actual production of parts and assembly of the final product is outsourced along a complex global supply chain. In the UK, Dyson follows a similar model as it does not actually produce any of its high-level household electronics and appliances.

Companies can have different strategic reasons for using contract manufacturers to produce their final products. Some of the key considerations are saving on costs for large upfront capital investments in machinery and equipment and the ability to produce close to important markets. However, there are also risks arising from being dependent on the contract manufacturer to deliver products on time and with consistent quality.

In a recently released paper we take a closer look at this type of manufacturing model, as they present potentially severe challenges to existing economic statistics. We review existing definitions and show conceptually that factoryless manufacturing (i.e. the use of a plant owned by someone else against a fee) can lead to significant measurement issues when allocating economic activity across firms, sectors, and also countries.

In the UK around 6.7 per cent of total revenues in the service sector come from production activities (ONS, 2018). While it is not unusual for some service companies to have some production activities as well, it could be that some of these are in fact factoryless manufacturers. We review the UK’s statistics on trade in services (incl. merchanting, manufacturing services, and R&D services) and discuss whether they are likely to capture some aspects of factoryless manufacturing. We conclude that while some of it might be recorded it is not clear where, and there is most likely some degree of underreporting.

The allocation of economic output between manufacturing and services sectors should not affect total output (though there could in principle be reallocation across economies). It is an important issue, however, as the ‘decline of manufacturing’ across industrialised economies has received considerable attention from politicians, media and the general public. Studies for the UK show that the total number of manufacturing jobs has declined from 7.9 million in 1971 to around 2.7 million in 2016. Studies for the US economy have shown that reclassifying factoryless manufacturers from services to manufacturing can lead to a significant increase in manufacturing output and employment (Bernard & Fort, 2015).

To illustrate this in more detail let us return to the example of the premium vehicles produced in Austria by the Canadian-owned Magna Steyr. Technically, the contract manufacturer is providing a ‘manufacturing service’ for Germany’s Mercedes-Benz or UK-based Jaguar Land Rover (owned by Tata), who in turn provide it with the necessary design, development and other intellectual property to produce the final vehicle. It is easy to see the formidable challenge this poses to working out the international transfers of inputs of goods and services, intellectual property, ownership rights and final products. At this point it is not entirely clear what type of economic activity is recorded in which country and whether we are dealing with a trade in goods or services.

At this point we do not know how many UK businesses are classified within services despite the possibility that they could be reclassified into manufacturing. Our study shows that more research is needed in this area as the issue is highly relevant in the context of a declining manufacturing sector, which we can observe in most advanced economies.

Diane Coyle is a professor in the department of politics and international studies at Cambridge University. She was previously professor of economics at the University of Manchester and has held a number of public service roles including vice chair of the BBC Trust (2006-2014), member of the Competition Commission (2001-2009), and member of the Migration Advisory Committee (2009-2014). She is currently a member of the Natural Capital Committee, an expert adviser to the National Infrastructure Commission and a member of the Council of Economic Advisers. She was awarded a CBE for her contribution to the public understanding of economics in the 2018 New Year Honours. Twitter: @DianeCoyle1859

David Nguyen s a research associate at the Economic Statistics Centre of Excellence (ESCoE) and a senior economist in the Trade, Investment & Productivity directorate at the National Institute of Economic and Social Research (NIESR). His main research interest is to analyse, measure and understand modern economies. Together with Diane Coyle he is working on improving measurements of GDP and welfare, focussing on the importance of intangible inputs in an increasingly digital economy (e.g. cloud services, AI, data). He holds a PhD in economic geography from LSE. Twitter: @d_vidnguyen