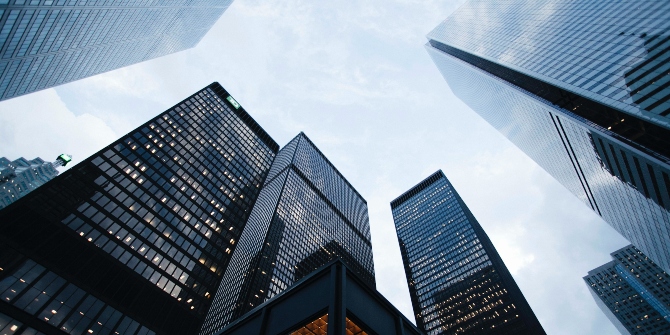 In an era when the voice of customers, environmentalists and other interest groups is getting stronger and stronger, corporate social responsibility (CSR) is increasingly adopted by firms and other organisations as a strategy to reduce business risks and achieve results that satisfy both shareholders and stakeholders.

CSR is associated with a large number of related concepts such as business ethics, corporate governance, accountability, corporate citizenship, sustainability, etc. but its most frequent use refers to the ESG (environment, social and governance) principle. Not all firms are equally willing to adopt the ESG principle. Researchers assume that non-financial corporations are more likely to adopt “voluntarily” the ESG principle than financial (i.e., not polluting) firms.

Actually, there is no theory that explains the “voluntary” adoption of CSR by both financial and non-financial firms. The goal of this blog post is to explain and better understand the current trend for “voluntary” adoption of the CSR. Using recent advances in network theory and regulation, I construct a multidimensional conceptual framework where the interplay of networks, regulation and corporations’ shareholders/stakeholders determine the outcome.

The CSR strategy is not compatible with the neoclassical view of the firm. According to the latter, the goal of a corporation is to maximise its profits (shareholders’ wealth maximisation). Friedman (1970) states explicitly, “there is one and only one social responsibility of business – to use its resources and engage in activities designed to increase its profits…”. According to this Friedmanesque view of the firm, CSR is a “fundamentally subversive doctrine” in a free society (Ibid, p.6).

By contrast, according to the modern view of the firm (Freeman, 1984, 2007 – chapter 20, Part III), the objective of firms’ managers is to maximise the value of the firm as a whole by taking into account all stakeholders’ (individuals like employees, clients, suppliers, activists, etc.) interests and not solely the interests of shareholders (stakeholder theory). In that sense, “the firm is a multilateral contract among its stakeholders, and the legitimate moral claims of the stakeholders are justified in contractarian terms” (Marcoux, 1998, p. 79). This Freemanesque view of the firm makes CSR an important objective of firms’ managers.

Is it possible to reconcile these two opposing views or do they represent two extremes of both theory and practice? Polishchuk (2009) developed a theoretical framework to examine the equilibrium conditions and the optimal level of network interaction that determine a corporation’s decision to adopt the CSR principle. The latter is the result of an analysis of the costs and benefits of CSR and regulation, two institutional alternatives in the bargaining between corporations and their stakeholders.

Luo and Bhattaxharya (2009) developed a theoretical framework to predict the impact of corporate social performance (CSP) on firm-idiosyncratic risk and the role of advertising and R&D in explaining the variability of CSP. The latter increases with increases in marketing expenses, contradicting the Friedmanesque point of view on the impossibility to reconcile CSR and firms’ profitability. The reconciliation of these approaches is possible if one introduces the dynamics of active members in the social networks. Using the theoretical framework I developed, I demonstrate that it pays for firms to adopt the CSR strategy whenever well-organised social networks exert direct pressure on firms and/or on the government to adopt regulation inimical to them.

Network theory is at the confluence of economics, sociology and computer sciences. It provides new opportunities to study and examine how networks shape and determine the course of key financial decisions and their propagation. Interconnectivity and interdependencies make them strong and capable of exerting a great deal of pressure and harm on corporations unwilling to comply with ESG principles.

To be effective, networks need the so-called social capital, i.e., a capacity for self-organisation and collective action (Keefer and Knack, 2003). Social capital is the driving force for mobilising other network members and exert pressure conducive to the adoption of CSR by targeted corporations. The degree of social capital depends on the position of an important member or group of members in the network. In network theory, there are three types of members: the centrally important, the systemically important and the cyclically important. Each of them plays a key role in the creation of social capital.

Networks use their social capital to exert pressure on governments so that they will adopt a regulation that constrains corporations’ “irresponsible” behaviour. It is assumed here that corporations view regulation as an “economic bad” that constraints their behaviour and economic performance. To avoid regulation, corporations may “voluntarily” adopt CSR principles (see figure 1).

In figure 1, financial and non-financial corporations have two strategies, either stay still (status quo) and enjoy a good financial performance or choose the CSR principle as an objective function and enjoy a good societal performance. Corporations do not choose the CSR voluntarily. For this to happen strong social capital is necessary. The higher the latter the greater the effect of networks (stakeholders) and the higher their capacity to exert pressure on the firm to adopt the CSR principle. Otherwise, they may persuade the government to adopt regulations that constraint corporations which do not conform to the CSR principle. Corporations would opt for the CSR strategy whenever regulation and/or social risks are costlier than the status quo strategy.

Figure 1. The interplay of networks, government regulation and corporation’s shareholders/stakeholders 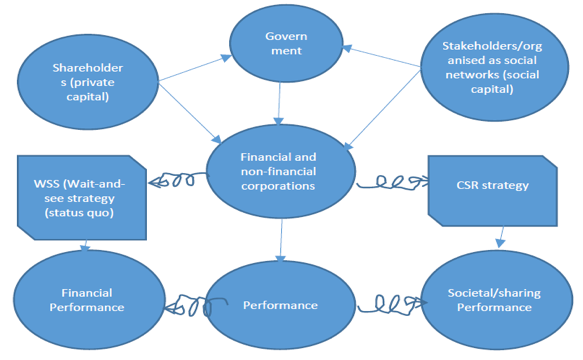 Government intervenes either on its own initiative or in response to a network’s pressure. Regulation by itself is undesirable since it imposes constraints on firms’ behaviour and performance. Considered as an “economic bad”, firms would avoid regulation should the latter appear to be more onerous than “voluntary” adoption of CSR. Social risk is a real threat to corporations that do not comply with the CSR principle. Failure to do so would trigger action against them by active networks composed of systemically important stakeholders.

Corporations are not passive agents. They spend resources to influence active or systemically important members either directly or indirectly using the government. From a strategic perspective, it is possible for a corporation to attenuate the actions of strong networks by targeting the most important members (systemically important players) or persuading the government and/or the regulatory agency to provide incentives to players with the highest cycle centrality to become less involved. When firms are unable to remove a key player from the interactive network, they would prefer to adopt the CSR principle rather than accept regulation.

Perspectives for investors, governments and stakeholders

The conceptual framework makes clear that there is a misalignment of interests among the various stakeholders. Corporations face the dilemma of choosing between regulation and CSR. From investors’ perspective, CSR is a better option than regulation particularly when the cost of regulation is higher than that of CSR. Corporations should work with social networks (chiefly with systemically important members) to drive a positive reputation and improve their branding. Public relations, effective means of communication and more marketing contribute to social acceptability and mitigate social risk.

Governments should also work with the systemically important members to assure that there is a better alignment of interests between opposing groups.

Systemically important network members should also recognise their sheer influence on the creation of social capital and the impact it may have on corporations’ financial performance.

Anastassios Gentzoglanis is professor of finance with the University of Sherbrooke, Quebec, Canada. Professor Gentzoglanis holds a Ph.D. in economics from McGill University, Canada. He is teaching international finance courses at both graduate and undergraduate programmes and courses for executives in the area of regulation of energy markets for international firms and organisations. He currently works in the areas of CSR and responsible finance, with specialisation in investment strategies with low environmental impacts. His research interests include the development of new financial methods to evaluate investment projects in the electricity and other network industries. He has published in numerous scientific journals and business reviews.