The textile and apparel industry is facing a crisis of large proportions. Increased costs of imported raw materials have led to higher retail prices. Demand for domestic production has fallen, tariffs and delivery times have been unpredictable, and retail sales took a hit. Several brands are shutting down. Some of the largest retailers have switched from UK to other EU or international suppliers, or relocated plants and warehouses to the EU. Simona Iammarino and Patrizia Casadei investigate the perceptions of Brexit uncertainty among UK textile and apparel firms and argue that the industry must be urgently included in the UK industrial strategy.

On 31 January 2020, after over 45 years of membership, the UK formally left the EU. The negative consequences of Brexit in terms of disruption of trade and global value chains – as foreseen in many scholarly contributions (e.g., Dhingra and Sampson, 2019) – had however already affected UK firms since the 2016 Brexit referendum. Industries very exposed to international trade and highly integrated in global value chains were predicted to be the most harshly hit by Brexit (Vandenbussche et al., 2017): among these, textile and apparel showed the largest projected percentage decrease in exports (Gasiorek et al., 2018).

We investigated the perceptions of Brexit uncertainty among firms in the UK textile and apparel industry, a classic example of “buyer-driven” value chain, where lead firms responsible for product design, branding and marketing play a key role in the organisation of global production, linking dispersed networks of overseas suppliers with final consumer markets (Gereffi and Frederick, 2010). We drew on data from an original survey carried out with 688 firms operating both upstream (i.e., manufacturers as “suppliers”) and downstream (i.e., designers/brand manufacturers/retailers as “lead firms”) the value chain. The survey, executed between June 2019 and January 2020, was sponsored by the UK Fashion & Textile Association.

Brexit uncertainty affected a large proportion of textile and apparel firms, both upstream and downstream (over 60 per cent of firms in both manufacturers and lead firms’ groups). Among Brexit-affected manufacturers, market uncertainty, associated with the sterling’s depreciation and a fluctuating exchange rate, was perceived as a major factor behind a variety of consequences (Figure 1). Generally, firms complained of increased costs of imports, particularly of raw materials, resulting in higher prices and lower demand for domestic production. A high share of suppliers experienced a significant decrease in the number of orders from UK and, to a lesser extent, EU and international customers, due to unpredictable tariffs and delivery times.

Some firms pointed out a downturn in retail sales, following a substantial reduction in the purchasing power of UK consumers and an increase in the price of products, with several brands and high-street shops shutting down. Some manufacturers voiced difficulties in keeping the business going, stocking up on raw materials, experiencing cash flow pressure, and facing increased foreign competition and a decrease in the labour force: Brexit-affected manufacturers employed a higher percentage of EU skilled workers and a lower percentage of UK-trained skilled workforce. Other firms postponed investment plans and delayed innovation-related projects, partly because of uncertainty linked to access to EU funding. Several firms lost old connections or established new ones along their supply networks: they pointed out that some of the largest retailers had moved production offshore, switching from UK to other EU or international suppliers, or relocated plants and warehouses to the EU. Firms declared: “We are now experiencing extreme difficulties in keeping the company going. We have had to lay people off and make redundancies”, or “Workers have started moving back, labour force is depleting, and skilled labour is going”.

A small share of manufacturers (only 4 per cent) witnessed a positive effect of Brexit, experiencing an increase in orders from UK retailers who sought to source more products locally to avoid potential difficulties. These firms noticed an increase in the workforce trained domestically to develop manufacturing skills, as well as more overseas visitors due to the weaker value of the sterling.

Turning to lead firms affected by Brexit, a high share witnessed a lack of customers’ confidence, which led to a significant reduction of their spending and decline in sales, intensified by higher prices of products (Figure 2). Market uncertainty, weak sterling and volatile exchange rate resulted in higher costs of imports and delivery, as well as increased overheads. Some firms mentioned a decrease in orders from UK buyers, changes to delivery plans, delayed purchasing decisions, and reduced ability to plan and deal with new potential EU and overseas customers. Others experienced a slowdown of their businesses, with reduction in profitability, investments, and workforce (with several foreign employees returning to their home countries, as noted also by manufacturers).

Overall, lead firms, and micro-sized firms especially, feared their future inability, due to lack of adequate financial resources, to trade with the EU without being part of the single market. Respondents stated: “Uncertainty around the new trade agreement has added complexity and reduced our ability to sell within Europe”, “We used to have a small production in the UK. Brexit sealed the end of this collaboration”, or “We have had to reduce our product offering to items that can be UK-sourced because we are a too small a company to cope with the red tape of importing”.

Only 3 per cent of lead firms declared to have been positively affected by Brexit, with an increase in sales particularly to the EU and US. 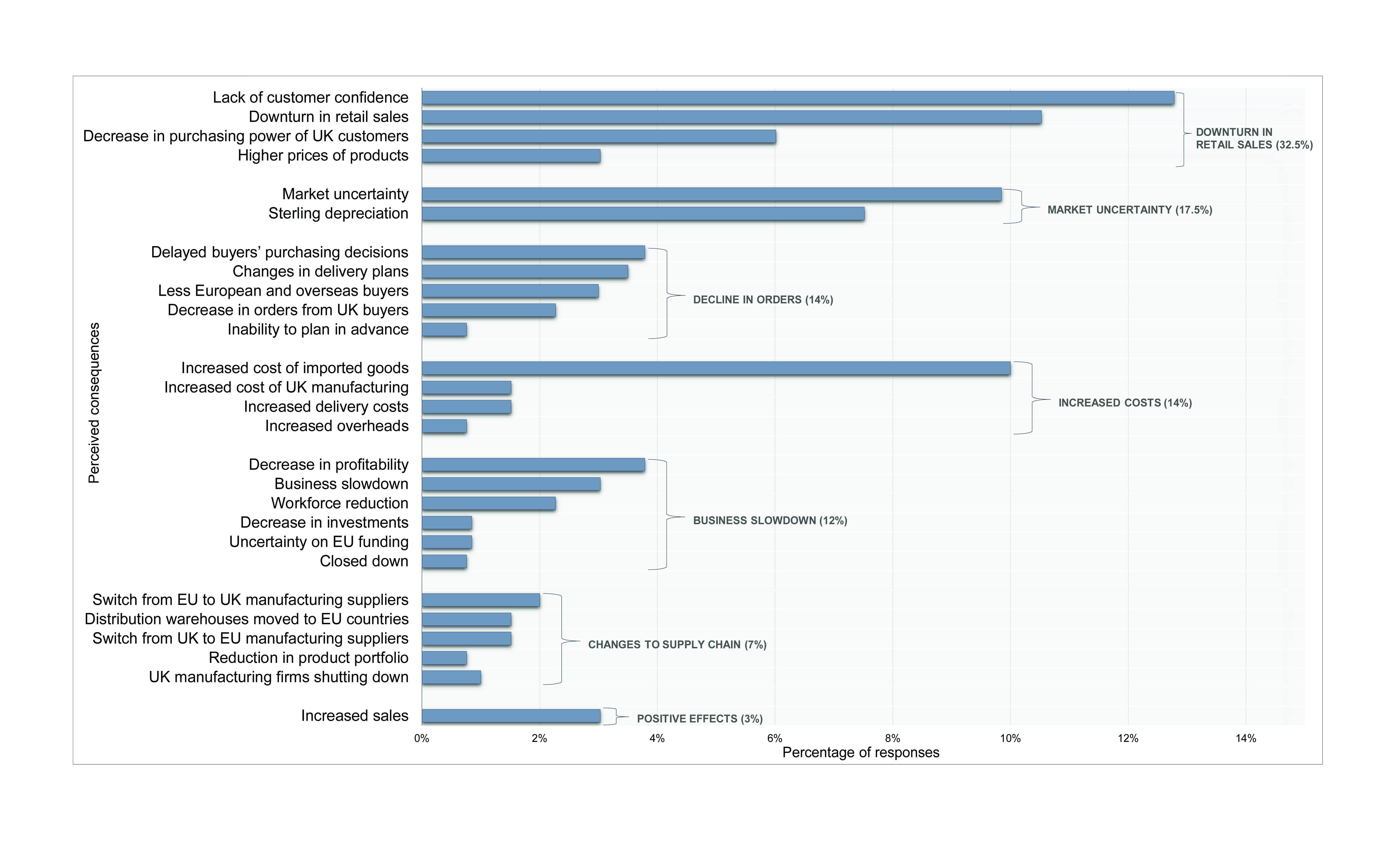 In the longer-term, firms in the UK textile and apparel value chain – particularly manufacturers highly integrated in global value chains through backward linkages (i.e., inputs imported from foreign value chain partners) and with offshore production involving intermediates and components – will have to deal with further changes to their trade and production networks. Support by the UK government is vital: the need for initiatives oriented towards the restructuring of this industry and, crucially, its prompt inclusion in the UK Industrial Strategy, is made all the more urgent by the withdrawal from the EU. Development of new skills and capabilities, adoption of innovative machineries and equipment, upgrading of product quality and standards, and integration in new production phases of the value chain would help the industry face the big challenges ahead, and to boost the confidence of domestic producers, retailers, and designers.

Simona Iammarino is professor of economic geography at the Department of Geography and Environment at LSE.

Patrizia Casadei is post-doc research fellow at the Science Policy Research Unit (SPRU) of the University of Sussex and a visiting fellow at the Department of Geography and Environment at LSE. 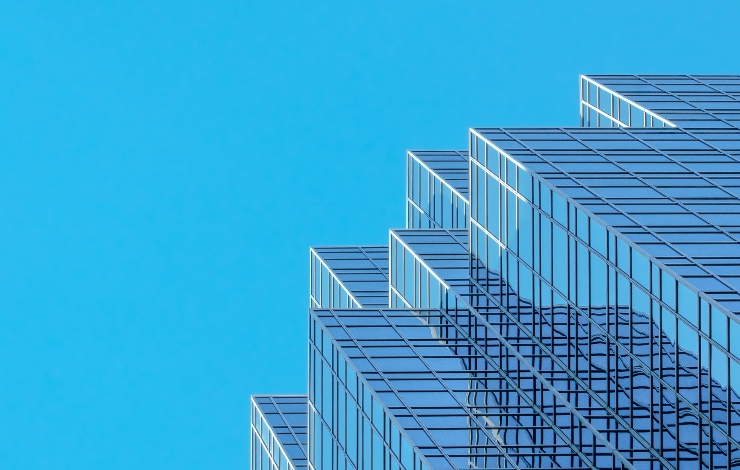