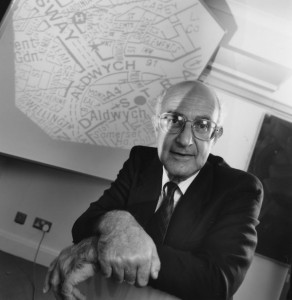 Dr Nancy Holman of the Department of Geography & Environment remembers Professor Derek Diamond, who died on 6th May 2015.

In the course of one’s career it is common to come across excellent educators, incisive researchers, strong administrators and tireless champions of students and alumni – however, it is rare that all of these qualities are encompassed in one individual. It is therefore with great sadness that the Department of Geography and Environment and the Regional and Urban Planning programme mark the passing of Emeritus Professor Derek Diamond.

Derek joined the School in 1968 taking over the Urban and Regional Planning programme, which had been founded two years earlier under Professor Sir Peter Hall. He directed the MSc and PhD in Planning until 1979, during which time he touched the lives of countless students from across the world. Many of these alumni who either were taught by Derek during his time as director or later generations who were led through the streets of London on his famous walks have written to us to express their deep sadness at his death but also their desire to celebrate his life as an educator, mentor and friend.

In his later career Derek also served in increasingly important administrative roles within the School. He directed the Greater London Group from 1980-1995 and was the Convenor of the Department of Geography from 1983-87 and 1990-92, an Academic Governor from 1983-87 and Vice-Chairman of the Academic Board from 1988-1993. He was also instrumental in the foundation of the Gender Institute serving as its Interim Director from 1993-94.

Derek was also a well-respected academic crossing the fields from planning to geography, considering himself to be an applied urban geographer. His standing in the field was reflected in his chairmanship of the Regional Studies Association (1974-76), his presidency of the Institute of British Geographers (1994) and the numerous journals upon which he served as editor.

The Department would like to extend our deepest sympathies to his wife Esmé and his two children, and to the countless generations of planners that he trained with such enthusiasm, wisdom and kindness. He will be missed by us all.

Read the book of Rememberences of Derek Diamond gathered by LSE London staff.

This entry was posted in Department of Geography & Environment, Gender Institute and tagged Derek Diamond. Bookmark the permalink.