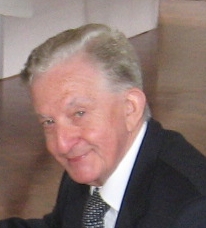 Michael died on 11 March aged 89, 29 years almost to the day since his most lasting achievement for the School.

Following a career at the Court Department and medical schools of the University of London, Michael was appointed in the late 1980’s to head up the LSE Estates Division and played a significant role in the School’s estate development for some ten years, either in an executive role or in major project management.

He was part of the team which negotiated the freehold of the Old Building, the contract being signed by then Director I G Patel on 21 March 1990. This, along with the acquisition of Connaught House, set in train a programme of acquiring the freeholds of the School’s buildings, and was the foundation for later estate development and acquisitions.

Michael’s work in and around the LSE estate brought him many surprises, including trying to work out how three drunks had managed to steal a 65kg penguin sculpture from the middle of the site!

Michael was unfailingly courteous and measured but had a steely side: he was always determined to pursue the best interests of LSE. Although coming here relatively late in life, Michael adopted the School in his affections, attending many SCR functions for retired staff until his late eighties.

Michael’s funeral will be held at 1pm on Friday 5 April at St Mary’s Church, Greyhound Hill, Hendon; followed by a wake at the Three Hammers pub, Hammers Lane, Mill Hill, NW7. Michael’s family welcome the chance to chat with LSE people after the service.