Plenty of disinformation about the pandemic is circulating. But Maria Kyriakidou, Marina Morani, Nikki Soo and Stephen Cushion (Cardiff University) find that the public are good at spotting and dismissing it. Instead, they criticise confusing journalism and contradictory information from government, with many expressing dismay at the reporting of death rates and PPE shortages.

Misinformation about COVID-19 has spread as fast as the pandemic itself. The ‘infodemic’ declared by the World Health Organisation (WHO) has become part of the health crisis, with the UK government investing resources into tackling false information online and the media prominently challenging it.

However, our research reveals that people’s understanding of misinformation goes beyond blatantly fabricated information or so-called fake news, which are often easy to spot and mostly dismissed by the public. Many of our participants felt misled by a range of information they encountered, which – in their view – was often conflicted or inconclusive, including government claims about the human impact of the pandemic in the UK.

The public are sceptical about disinformation

As part of our ongoing diary study about news consumption during the COVID-19 pandemic, we asked just under 200 research participants between 16 and 23 April to recount any news stories they thought might have been false or misleading. As expected, the claim linking 5G networks with the spread of the coronavirus dominated responses, although none of the participants found this story believable. Respondents mostly attributed this conspiracy to social media, such as Facebook and WhatsApp, though some recalled seeing it discussed on television.

Other common answers included health myths spread on social media platforms, such as drinking water to avoid catching COVID-19 or injecting disinfectant as a cure – famously propagated by Donald Trump in a live press conference – as well as conspiracy theories about the origins of the virus in a Chinese lab or in bat soups consumed in China. These were described as ‘fake news’ stories by many participants.

Perhaps more revealing were responses that expressed not disbelief in fabricated stories, but instead confusion about issues participants claimed to have inadequate or conflicting information about. The question of possible dates for when the lockdown would end was prominent. For example, participants mentioned social media rumours that schools, hairdressers or pubs would soon open, as well as news stories that they found confusing, such as plans to ease the lockdown gradually and at different stages. The lack of specificity in these stories made them sound unlikely and meant that, as one participant wrote, ‘people are in limbo and it gives people the wrong impression’.

Even a former Conservative minister and chief of staff to Theresa May, Gavin Barwell, has pointed out that media coverage of the government’s lockdown measures might create public misunderstanding.

This + other headlines feel like they are from a different world to the one where we saw more than 6,000 new cases and 600 deaths yesterday. Suspect there will be only a slight relaxation + we are likely to be living with some restrictions for at least a year https://t.co/ULi9jGgwC1

Similarly, people expressed confusion about the number of deaths reported daily. Given that official numbers only included hospital deaths and not fatalities in nursing or care homes, they were described as perplexing and difficult to believe. According to one participant, reporting by ‘the BBC and other news channels’ about death rates was misleading because:  ‘This can make people unaware of just how bad coronavirus has gotten as it does not allow people to understand that although hospital deaths are going down, we do not actually know if overall deaths are decreasing.’

Indeed, our previous research suggested many people did not realise the UK’s death rate is high compared to other countries.

Face masks were another confusing topic. A number of respondents pointed out that the information about their role in stopping disease transmission was conflicting and confusing. A few participants attributed this inconsistent health guidance to the shortage of face masks in the UK. Some people thought the media and government were actually covering up the lack of masks. As one respondent wrote: ‘I believe the face mask reports are false, a lot of information from abroad shows a reduction in infection rates. The UK, I believe, report they are no good because we don’t have any.’

Some respondents expressed genuine bafflement over reporting that the government had missed the opportunity to join an EU scheme to buy PPE in bulk, because news stories about the decision were conflicting.

The Foreign Office's top civil servant has retracted his claim that the government made a "political decision" to opt out of an EU scheme to get PPE for healthcare workers. @TomSwarbrick1 asks: what does this row say about how the government is handling this crisis? pic.twitter.com/YA4t8ZvWJb

Others pointed out political spin and misinformation in the handling of NHS shortages. According to one participant, health secretary Matt Hancock’s ‘initial statements in regards to PPE weeks ago were wilfully misleading and false and this statement has been revised repeatedly over the past weeks, I believe, due to growing public pressure and increasing death toll of frontline NHS workers.’ In this context, misinformation is not experienced as a problem inherent in media coverage or journalism, but a question of political spin and mistrust in politicians and the government’s handling of the pandemic. Although participants did not always directly criticise the media for misleading coverage, they implied that journalists amplified political misinformation by uncritically reproducing it. As one participant put it: ‘I’ve seen more articles that I think are misleading rather than false such as reports by major news outlets such as the BBC about how many tests we are doing and deliveries of PPE, however I think that this is more due to the government exaggerating figures than untrustworthy reporting by the media.’

Our research shows that news audiences perceive misinformation about COVID-19 not only in terms of wild conspiracy theories, or as false or misleading news, but also as confusing news coverage or a product of government messaging. Finding ways to effectively counter both disinformation and misinformation will not be straightforward. Fact checkers such as BBC Reality Check, Channel 4’s FactCheck and Full Fact have been doing a good job of pointing out fabricated information, and in particular health myths about the spread of the virus. However, they alone cannot mitigate a perception that they are being misinformed or misled by the information they encounter either from the government or mainstream media.

All journalists have a vital role in countering this misinformation by independently checking and, where appropriate, challenging government messaging more robustly. 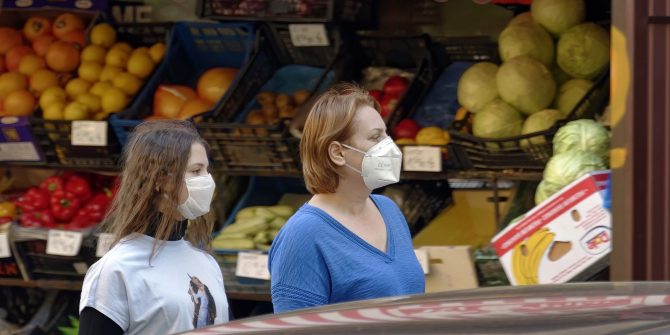