What will be the political legacy of the coronavirus pandemic? A new study shows that epidemic exposure in an individual’s “impressionable years” (ages 18-25) has a persistent negative effect on trust in political institutions and leaders, especially in democracies. Combined with other evidence that trust is important for limiting the spread of infection, Cevat Giray Aksoy (King’s College London), Barry Eichengreen (Berkeley) and Orkun Saka (LSE) say this raises the spectre of a circular, self-reinforcing spiral in which poor public health policy leads to deeper distrust, further undermining its effectiveness.

It is widely argued (by, among others, Francis Fukuyama) that the keys to success in dealing with COVID-19 are “whether citizens trust their leaders, and whether those leaders preside over a competent and effective state.” By way of example, Bo Rothstein ascribes the greater success at containing the COVID-19 in the Nordic countries than in Italy in part to greater trust in government.

Building on previous work suggesting that attitudes and behaviour are durably moulded in what psychologists and sociologists refer to as the “impressionable” late-adolescent and early-adult years, we show that exposure to epidemics at this stage in the life course durably shapes confidence in political institutions and attitudes toward political leaders. (On the “impressionable years” hypothesis, see Dawson and Prewitt 1969 and Jon Krosnick and Duane Alwin 1989. For an economic application see Paola Guiliano and Antonio Spilimbergo 2014.)

Specifically, we find that individuals who experience epidemics in their impressionable years (specifically ages 18 to 25) display less confidence in political leaders, governments, and elections. The effects are substantial: an individual with the highest exposure to an epidemic (relative to zero exposure) is 7.2 percentage points less likely to have confidence in the honesty of elections; 5.1 percentage points less likely to have confidence in the national government; and 6.2 percentage points less likely to approve the performance of the political leader. (The respective averages of these three variables in our sample are 51 percent, 50 percent, and 50 percent.) These effects represent the average treatment values for the remainder of life. They decay only gradually and persist for two decades: the difference between the median age during impressionable years (21.5) and the median age in the last subsample (40.5) corresponds to 19 years (Figure 2).

Figure 2: Effects of epidemics in impressionable years over subsamples with rolling age-windows 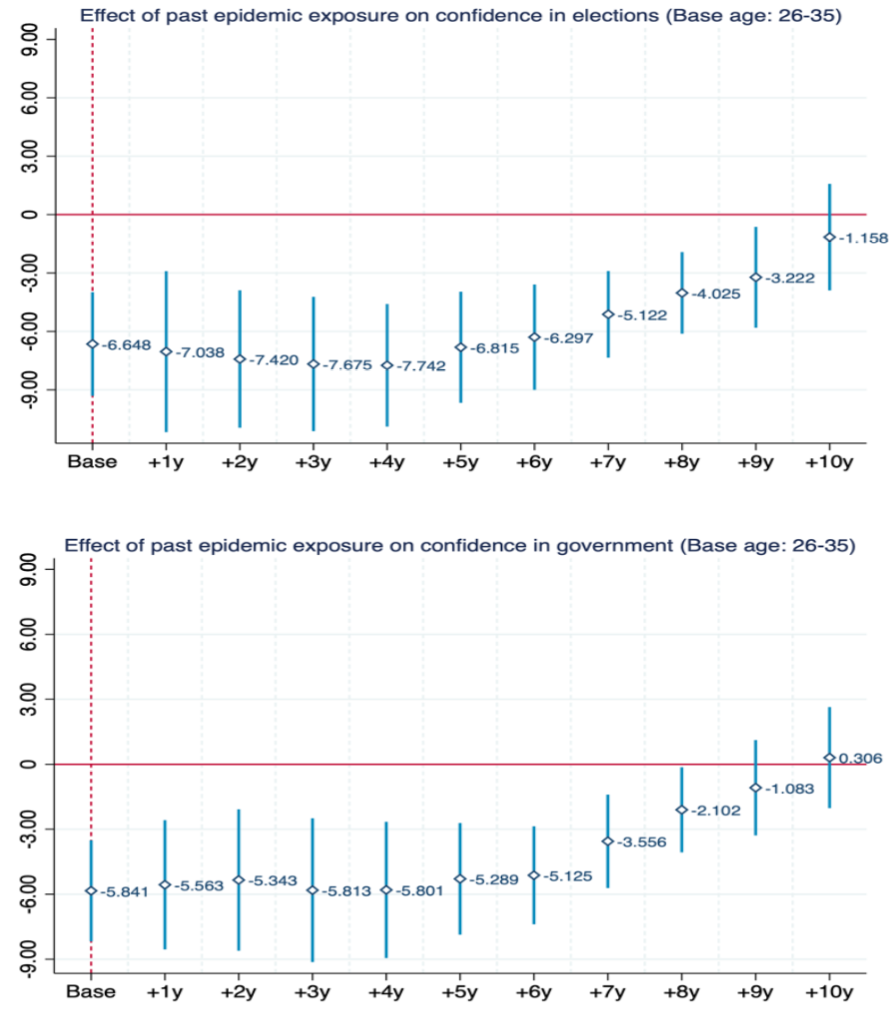 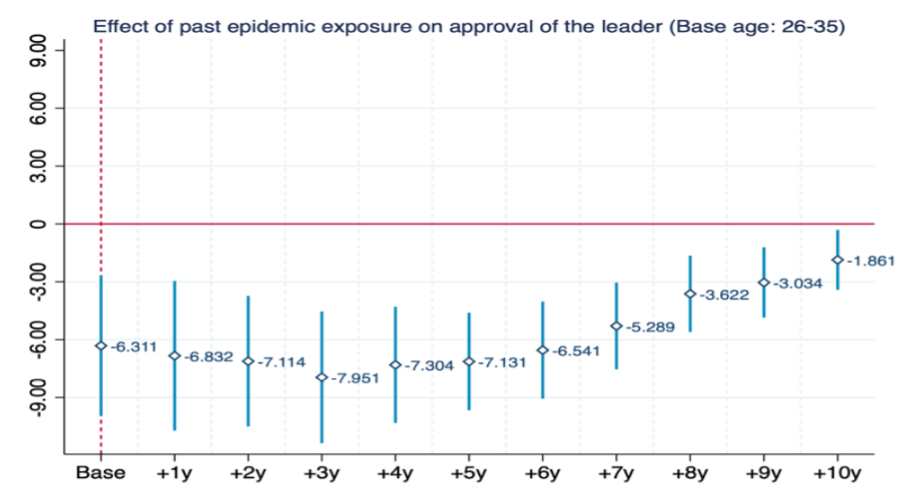 Note: This figure shows the persistence of the effects on three main outcome variables by restricting the observations to the respondents who are in the 26-35 age range at the time of the survey (Base sample) and then repeatedly rolling this age window forward by one year for each separate estimation. The plotted coefficient is Exposure to epidemic (18-25) in Equation (1) in Aksoy, Eichengreen, Saka (2020). Confidence intervals are at 95% significance level.
Source: Gallup World Polls, 2006-2018 and EM-DAT International Disaster Database, 1970-2017

In addition, epidemic exposure in one’s impressionable years matters mainly for residents of democratic countries. Residents in democracies sharply revise downward their confidence and trust in political institutions and leaders following significant exposure, whereas the same is not true in autocracies. It may be that citizens expect democratic governments to be responsive to their concerns and that where the public-sector response is not adequate, they revise their attitudes unfavorably. In autocracies, there may not exist a comparable expectation of responsiveness. In addition, democratic regimes may find consistent messaging more difficult. Because such regimes are open, they may allow for a cacophony of conflicting official views, resulting in a larger impact on confidence and trust.

This post represents the views of the authors and not those of the COVID-19 blog, nor LSE. It first appeared in a similar form at VOXEU.

Orkun Saka is an assistant professor of finance at the University of Sussex, a visiting fellow at the LSE, and a research associate at the Systemic Risk Centre. His main research interests are in financial intermediation, international finance and political economy. He tweets @orknsk.

I’m pro-young, not anti-old: policy responses to Covid-19 are at odds with the 'fair innings' principle April 29th, 2020 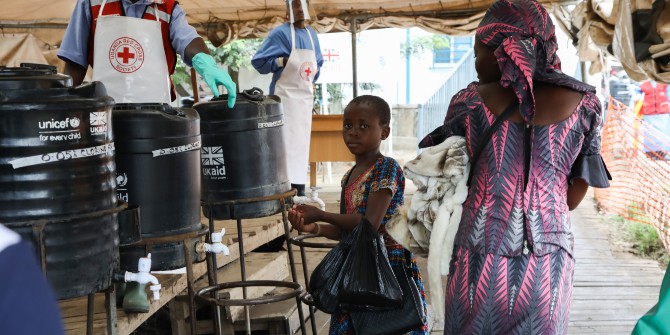 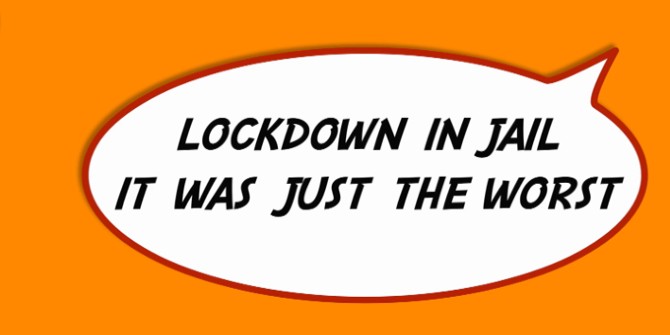 What the pandemic meant for children in the justice system 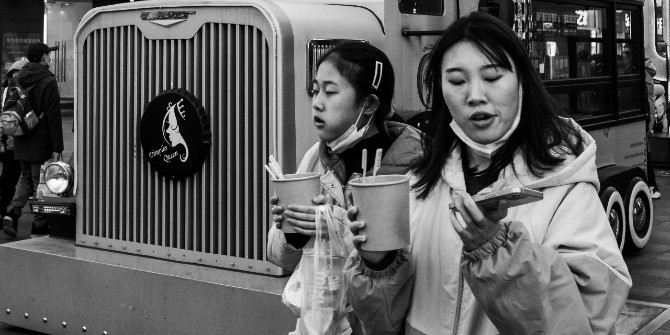 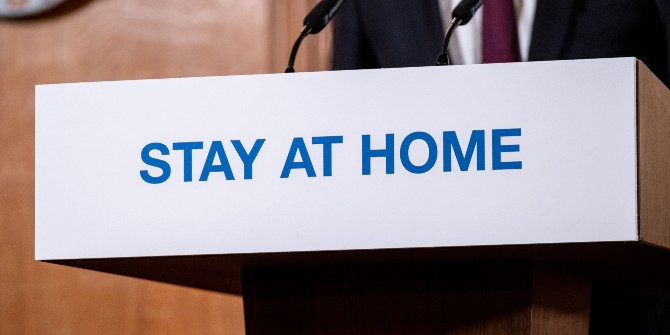