Tony Hockley (LSE) argues that the current UK-EU blame game is a manifestation of deep-rooted political challenges originating from Brexit.

The UK and EU are still tightly bound by the complexities of vaccine supply chains. They are, however, divided by emotions. To many Britons, the EU looks to be driven crazy by envy at a vaccination programme in which it acted on the maxim to “take back control”, and this craziness has led EU politicians to commit the self-harm of destroying confidence in the “British vaccine”. To many Europeans, the UK looks like to be living up to the Brexit stereotype of blinkered self-interest, blithely detached from a continent being ravaged by a “British” variant of COVID-19.

The binary rhetoric that emerges from these two world views is generating a dangerous empathy gap between political leaders, with potentially serious and lasting consequences. On both sides, there are deep-rooted political challenges that will be complex to resolve, and for which the simplest solution is to deposit blame on the other side of the English Channel. Closing the empathy gap should be a high priority.

When European countries decided in March 2021 to pause vaccination with the Oxford-AstraZeneca “UK” COVID-19 vaccine (AZ) over safety concerns, it provoked almost universal outrage and indignation within the UK. Many commentators saw it as direct retribution for Brexit and the result of irritation at the UK’s relative success in vaccine deployment. These malevolent interpretations may reflect more on a Brexit-dominated worldview within the UK than on the real motivations behind EU Member State decisions to invoke the Precautionary Principle following data associated the AZ vaccine with a very rare condition involving blood clots. A pause in the deployment of the AZ vaccine was an almost unthinkable solution … for the UK. It is what would be described in behavioural science as an “aversive solution”, that renders the problem it is attached to almost invisible to some. Sometimes we are simply incapable of seeing the complexities of the world when the response to these complexities conflicts with our worldview. An “empathy gap” separates two completely different perspectives.

For the UK, with a seemingly credible “roadmap” out of lockdown, the idea of pausing the AZ vaccine, even briefly, seems insane. Seen through a different lens this may not be the case. There are two core reasons, for context, that may account for this gap:

The UK is unusually reliant upon the AZ vaccine. It appears that the AZ product may now account for 3 in 4 vaccinations in the UK[1] (or more), with the Pfizer-Moderna product reserved for certain groups, particularly those who received it for their first dose because it was the first product authorised and distributed. The opposite may be true in other countries, with very little reliance to date on the AZ product, due to availability and choice. With vaccination at much lower levels than in the UK and with a much lower AZ share within this total, a short pause of its use would have limited direct impact. Additionally, some of those affected by the pause will have been waiting on their second dose (which emerging evidence suggests is not harmful in the case of the AZ product). 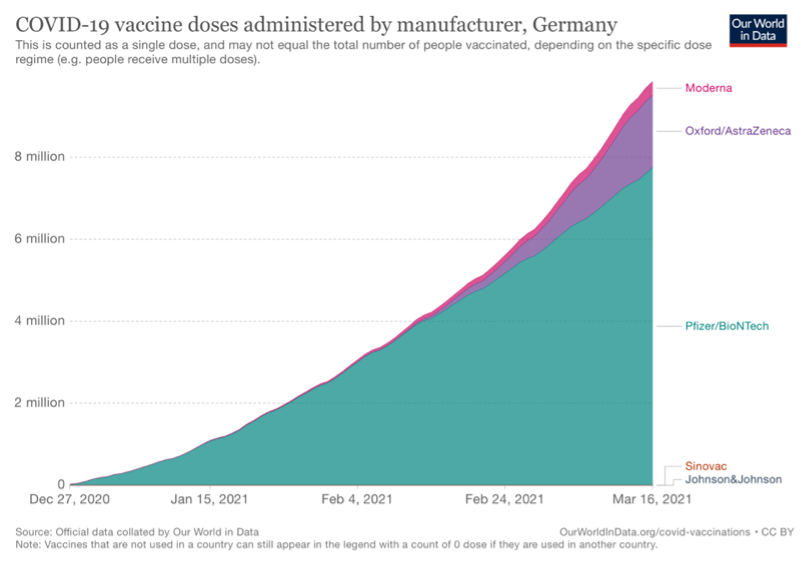 The UK has unusually high levels of confidence in vaccination. Much of the recent commentary brings to mind the joke about the tourist in Ireland asking for directions, who was told: “I wouldn’t start from here”. Past comments by EU Member State have reinforced vaccine hesitancy in relation to the AZ product. This was already fertile ground. A large gap in headline efficacy outcomes from clinical trials (with AZ’s competitors achieving levels close to 100%) put the product on the back foot in terms of public perceptions. Being the cheapest of the available vaccines reinforces this prejudice, regardless of the technical differences that make direct comparisons difficult. These basic data have real salience with the public. They are, unfortunately, very simple and very clear. 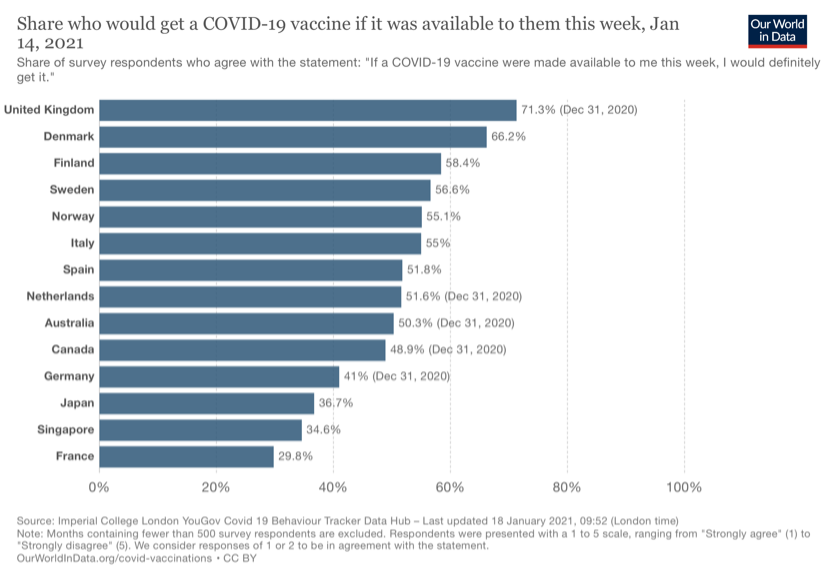 The politicians’ “mis-speaks” happened: like it or not, these countries are where they are today with high (even majority) levels of hesitancy. Politicians were playing to this audience, and decisions must continue to be alert to the challenge they face. Ignoring data on potential side effects, even very rare ones, is not a viable option given the state of public opinion.

European leaders seem to miss the fact that UK vaccination success is the only way for the PM to redeem a reputation marred by more than 125,000 deaths and to keep his party’s lockdown sceptics at bay.

The President of France, for example, faces another presidential election in Spring 2022. The National Front could well maintain its steady progress towards a win. Vaccine fears form part of the anti-establishment sentiment within the broadening base of support for the National Front. This cannot be ignored.

It may be in Emmanuel Macron’s interest both to woo a vaccine-hesitant population by diverting blame for vaccination problems onto Britain and its vaccine. The same is true for a European Commission alert to increasing national concerns at the failure of a centralised vaccination strategy, with some looking to Russia for support. However dangerous and distasteful these are the “nested games” that politicians play, but whose complexity is too easily missed. Britons attacking Macron for his “dangerous” comments may make this particular play more effective, not less. Similarly, European leaders seem to miss the fact that UK vaccination success is the only way for the Prime Minister to redeem a reputation marred by more than 125,000 deaths and to keep his party’s lockdown sceptics at bay.

The extraordinarily high levels of vaccine support enjoyed by the UK has meant that its regulators have been able to take valuable calculated gambles in its vaccine strategy. This was particularly true in its extraordinary decision to extend the dosing interval from days to months. High levels of general vaccine hesitancy in some other countries mean that extreme caution is essential in order to nurture public confidence. Copying the UK approach to dosing interval may have been more disastrous for vaccine confidence than a few misguided statements by political leaders about one product. 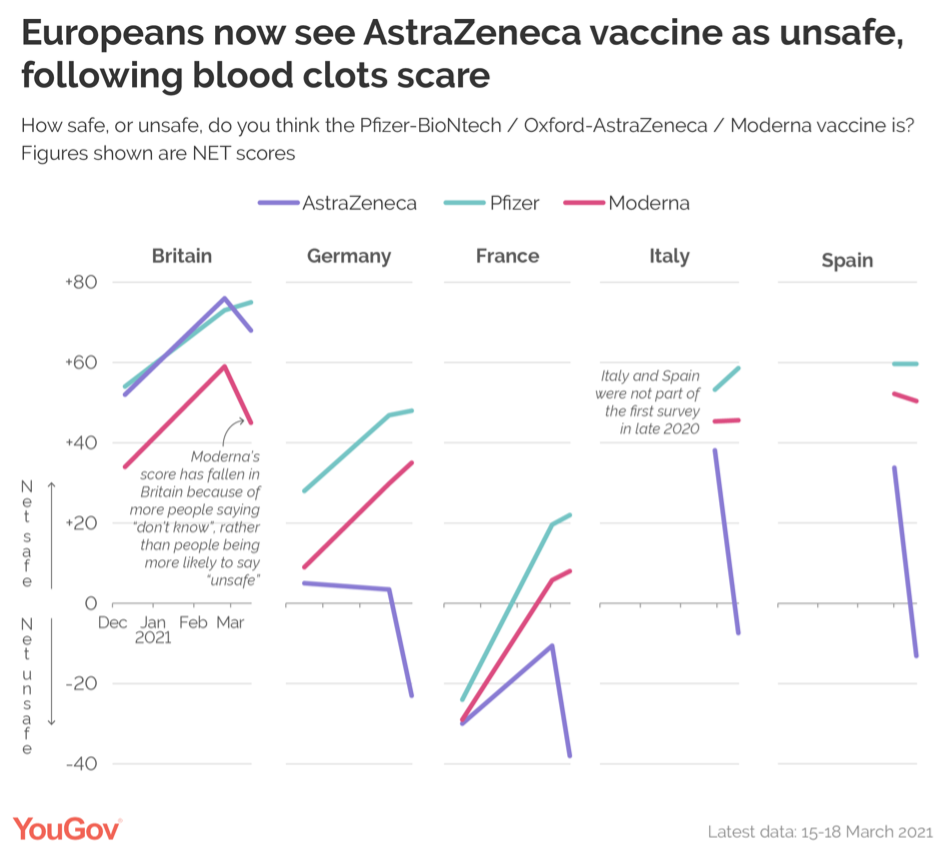 In this context it was probably right for the German regulator, for example, to advise pausing use of the AZ vaccines after it noted an accumulation of cases of a very rare clotting disorder in some people vaccinated with the AZ product. Whilst proof of causation is very difficult to obtain in health policy, an association such as this cannot be ignored or wished away. Being seen to err on the side of caution should be a core part of a strategy of confidence-building if the cross-Channel blame game is stopped. It is interesting to note that polling suggested that there was no contagion from the blood clot scare from the AZ vaccine to the others in current use.

Amidst some of the more simplistic comparisons with other risk scenarios, “#paracetamol” was trending in UK social media, as part of the ridicule of the precautionary pause. This reminded me of a policy crisis many years ago that I handled as Special Adviser in the Department of Health, which also highlighted the importance of empathy in regulatory decisions. Ireland had proposed limits on the size of paracetamol pack that could be bought without a prescription. This was a measure to tackle the awful problem of suicide by overdose. Paracetamol is very safe and effective – within the set daily limits. In England, we felt bound to follow. The campaigners’ case for restriction was powerful and deeply human.

The product manufacturers rightly highlighted the irrationality of this decision. It would restrict access to a safe medicine in widespread use; increase demand for NHS-funded prescriptions of larger packs; prompt people to use less safe forms of pain relief; and would be unlikely to have any direct effect on the overall number of suicides. Nonetheless, the human context made action important. We were where we were, not in a situation of cold rationality but of emotion. The case for a clampdown was clear and simple: restricting paracetamol availability would limit the opportunity for paracetamol-related suicide.  By any standard risk-benefit test it was wrong.

In much the same way that regulators in vaccine-hesitant countries risk fuelling fears by not acting on reported safety concerns, inaction on paracetamol would have risked increasing its use in suicide simply because the Irish decision had put it in the headlines. These decisions are as much about the context as they are about direct analysis of the individual decision.

The best strategy to address vaccine supply issues and issues of vaccine confidence is not mutual denigration, but empathetic diplomacy.

If the empathy gap between the UK and its neighbours is not closed, then further damaging arguments are inevitable. The risk of vaccine hesitancy contagion is high. Data always emerge in the real-world use of medicines at scale, which would have never shown up in a clinical trial. These vaccines are being used at an extraordinary scale. If new concerns become diplomatic incidents then their divisive impact will be amplified, and in the case of vaccine hesitancy, the risks will be amplified by the headlines. This will be increasingly relevant as the global vaccination effort builds. Whilst Astra Zeneca’s report of its US vaccine trial appear positive, a licensing decision by the US Food and Drug Administration may yet require a shared communications strategy in response, not a battle of words on this side of the Atlantic.

In the end, the outcome of the blood clot scare was exactly as would be expected. The European Medicines Agency quickly reviewed the data, assessed the risk-benefit profile of the vaccine (with an almost inevitable conclusion) and committed to updating the product literature in relation to a possible causal link with the rare clotting incidents and to initiate further research. That some countries opted to pause the use of the AZ vaccine whilst the blood clot cases were quickly investigated was entirely understandable within the circumstances that they face.

The best strategy to address vaccine supply issues and issues of vaccine confidence is not mutual denigration, but empathetic diplomacy. The UK is already building post-Brexit bridges with the US Biden administration with climate change as a binding cause. It must quickly find a similar common cause with its continental neighbours. Vaccination rhetoric is making this a tough challenge. Efforts on all sides to close the empathy gap are of vital importance.

[1] The UK authorities do not release data on each vaccine’s use. The “blood clot” scare led to the release of data on “Yellow Card” reports relating to the two vaccines in use. The indicated that the ratio of Yellow Card alerts between the Pfizer-BioNTech and Oxford AstraZeneca was increased significantly between the three months up to 7 March and the weeks thereafter, from around 1:2 to 1:3.5, alongside a claim that both vaccines have similar reporting rates of 3-6 Yellow Cards per 1000 treated.

This post represents the views of the author and not those of the COVID-19 blog, nor LSE. It first appeared at LSE Brexit Reality. 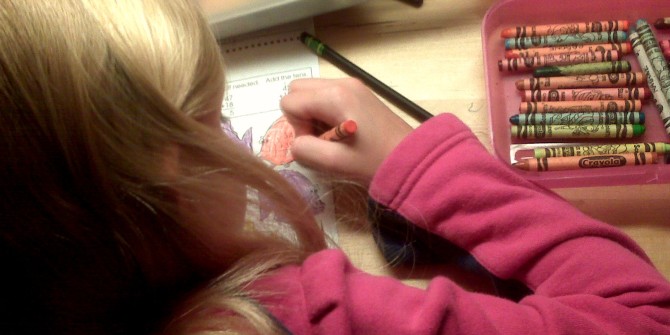 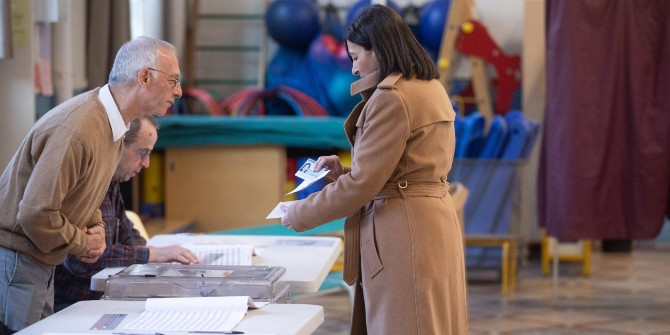 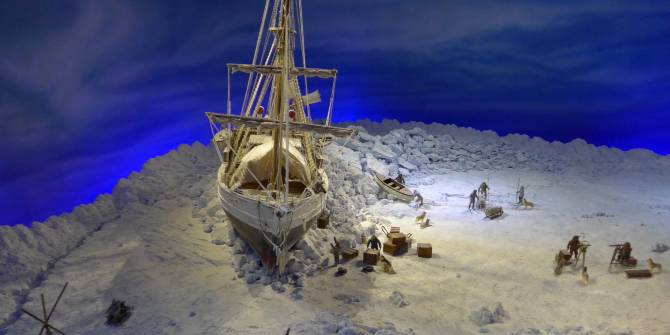 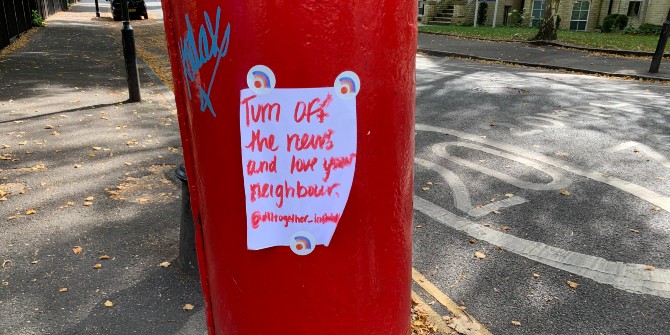