Protests last year decried corruption as the main source of the Iraq’s struggles in the post-2003 area. Prime Minister Mustafa al-Kadhimi came to office in the wake of the protests, and soon began a campaign to address the problem at one of the sites most notorious for corruption: the country’s border crossings. Beginning in July 2020, two months after he assumed office, Kadhimi travelled to a border crossing on the Iraq-Iran border located in Diyala province. With security officials standing to his left and right, he proclaimed a “new era” in fighting corruption, and that border guards now had the authorisation to “shoot” at those who violate the rules of the customs zone. Kadhimi then turned to the head of Iraq’s border authority and instructed him to “search for ghosts”, referring to an unnamed network of actors involved in profiting off illicit cross-border trade.

Kadhimi’s usage of vague language points to the delicate nature of the border issue. A number of local observers have documented how the political parties and their corresponding armed branches rely on the border crossings as crucial sources of revenue. Thus, in theory, tackling corruption at the border would mean attacking the heart of Iraq’s political and security establishment. Would Kadhimi – a Prime Minister that most analysts have described as weak due to a lack of parliamentary support – be able to pull off such a feat?

The Prime Minister’s Office staked a significant amount of political capital in the border campaign, and quickly declared a swift and resounding victory. Just five months later, the border authority under the Prime Minister’s Office released customs and tariffs revenue data indicating Kadhimi’s measures had been remarkably successful. A supposed 168,567,919.050 billion IQD (115,513,530.40 USD) of revenues had been recovered over the period that followed Kadhimi’s measures.

A closer look at the data, however, reveals that it entirely omits revenue numbers from the very border crossings where Kadhimi publicly launched his campaign amidst great fanfare – those in Diyala province. This omission leaves a gaping hole in the government’s success story. One possible explanation for the lack of Diyala data is that Kadhimi and his advisors are contending with the realities of Iraq’s fragmented political terrain, one in which entire provinces – and their corresponding strategic assets such as border crossings – come under the effective control of specific political parties and armed groups.

Badr at the Border

The Badr Organization – which has 17 seats in the national parliament as well as numerous PMF brigades under its control – is among Iraq’s most powerful majority-Shia political parties. In the wake of the anti-ISIS campaign, Badr has leveraged its significant military role in the liberation effort to solidify control over specific territories, particularly Diyala province. Badr holds all the key government positions in the province. Badr likewise dominates Diyala’s security sector through various aligned PMF brigades, Iraqi Security Forces, and police. This near totalising capture of the state in Diyala has granted Badr effective control over two major border crossings – the Munthiriya crossing to the north of the province and Mandali to the south. Customs officials carry out their duties with the understanding that they have to collaborate with the Badr-controlled political and security apparatus in the province.

As a matter of strategic interest, Badr relies on its two Diyala border crossings for revenues – which are particularly important given the global reduction of oil prices — and military support from its key ally Iran. Symbolically, both Badr and Iran project themselves as the protectors of Shia pilgrims using these two crossings en route to shrines in Samarra, Baghdad, Najaf, and other sites in the south.

As Kadhimi embarked on his border campaign, he knew that these interests and power structures on the ground would not change, and the best he could do was negotiate a symbolic reassertion of state authority over the border. When the Prime Minister came to Diyala and declared that the Army’s Rapid Response Forces (RRF) as well as the PMF would now oversee border crossing in the area, the move immediately came under scrutiny of local observers . One local commentator called it a “a show for the media”. Indeed, the close ties between these two particular forces and the Badr Organization would suggest that the move was cosmetic at best. The commandership and rank-and-file of both the RRF and the PMF are directly linked into Badr leadership. The flows of cash into party coffers would not change in any major way.

The Diyala border crossings were not alone in receiving visits from the Prime Minister. This was a nationwide-wide campaign with a number of prominent public appearances. Following appearances at the borders in Diyala and then subsequently Basra, Kadhimi then set his sights on Iraqi Kurdistan and visited both the Bashmakh crossing in Sulaymaniyah and the Ibrahim Khalil crossing in Dohuk.

The Kurdish visits were delicately choreographed and struck a more reserved tone. Instead of making public statements declaring a change in policy, the Prime Minister limited himself to a series of staged inspections and private meetings. Kurdish officials greeted the Prime Minister and displayed the border’s facilities, financial controls, and even their COVID-19 protocols. A Kurdish MP noted that Kadhimi reportedly thanked the Kurdish officials for their work and professionalism. Though Kadhimi made general allusions to the need for greater cooperation between Erbil and Baghdad, there was no concrete suggestion that the federal government would impose measures to combat corruption or ensure that the 50/50 split of revenue between the KRG and the GoI was indeed being enforced.

Kadhimi’s reserved message at the Kurdish crossings reflects a long-standing reality: since 1991, Kurdish peshmerga have effectively controlled the borders without any presence of the Iraqi security forces. Though many political factions in Baghdad decry the lack of federal oversight, the fact remains that both the Iraqi government and international partners have long treated the Kurdistan Regional Government (KRG) as the legitimate authority over border management.

No amount of pressure from Kadhimi or the Baghdad-based political parties will fundamentally alter the KRG’s hold over its borders. Both of the region’s dominant political parties look to the borders as an existential issue. The region’s crossings with Turkey and Iran are controlled by the Kurdistan Democratic Party (KDP) and the Patriotic Union of Kurdistan (PUK), respectively. Border guards and customs officials are appointed by the KRG but take orders from the two parties.

As discussed in prior research on Kurdistan’s patronage system, the dominant Kurdish parties have relied heavily upon the two crossings for revenues since 1991. Today, even despite the region’s generation of oil revenues, the crossings remain at the heart of the parties’ financial capacity in addition to maintaining the symbolism of the region as a semi-independent entity with bilateral relations of its own. Turkey and Iran, for their part, have little interest in seeing a change to the status quo as both Ankara and Tehran have long-standing political and economic relationships with the KDP and PUK. Any substantive reassertion of federal authority at the borders would destabilise these relationships.

The message of the border visits was unmistakable. Kadhimi — who himself is known for his careful attention to his image in the media — understood that the country’s farflung border crossings have long been known for being domains outside of state control. He also understood that Western partners would look favorably upon any effort to diminish the financial basis of the PMF. Following the visits, one Washington-based security analyst stated that the measures taken by the Iraqi Prime Minister at the border crossings aimed at “securing funds for the cash-strapped government while denying them to militias.”

These expressions of optimism over the potential for the diminishment of militia finances did not adequately take into account the relationship between the PMF-aligned parties and the state. In Diyala, the Badr Organisation and its PMF affiliates enjoy de facto sovereignty and not the government. Iraqi authorities in the province – including those who oversee border revenues – are themselves aligned with Badr, and there is little if any prospect of disentangling the two. In Iraqi Kurdistan, the Kurdish parties’ control over the border is both a reflection of their interests and a product of the post-2003 constitution, which granted the KRG authority over its territories. In both the case of Diyala and Iraqi Kurdistan, Kadhimi’s border campaign realised its limits in the face of Iraq’s party-controlled political structure.

Corruption at border crossings is not specific to Iraq. But the existing literature locates the problem in the poor infrastructure at the peripheries, lack of automated systems, and the networks of collusion between border communities, traders, and customs officials. The assertion of state control in these contexts is thus a matter of technical governance and security improvements. This presumes the existence of a relatively coherent state authority with sufficient capacity to shape power dynamics on the ground. The post-2003 political order in Iraq has witnessed the rise of political parties and their armed affiliates as state-like entities with control over specific territorial domains and cross-border corridors. As the parties are stronger than the state, the best the Prime Minister can hope for is maintaining a degree of symbolic authority in areas under party control. In this regard, Kadhimi’s focus on developing sophisticated media messaging — with highly publicised appearances at Iraq’s borders — is perhaps good short-term politics. In the long-term, any substantive effort at tackling corruption will require meaningful constraints on the power of the parties.

Mac Skelton is the Director of the Institute of Regional and International Studies (IRIS) at the American University of Iraq Sulaimani (AUIS).

Security and Governance in the Disputed Territories Under a Fractured GOI: The Case of Northern Diyala December 6th, 2018 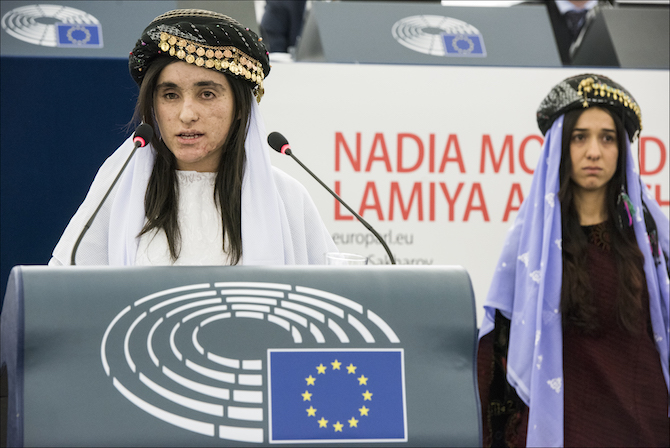 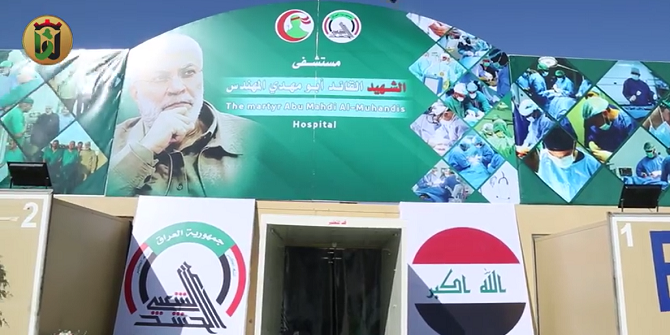 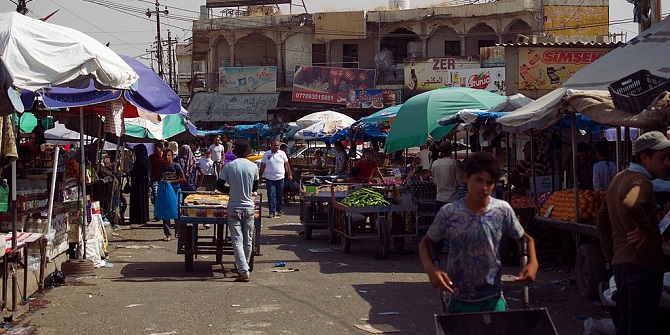 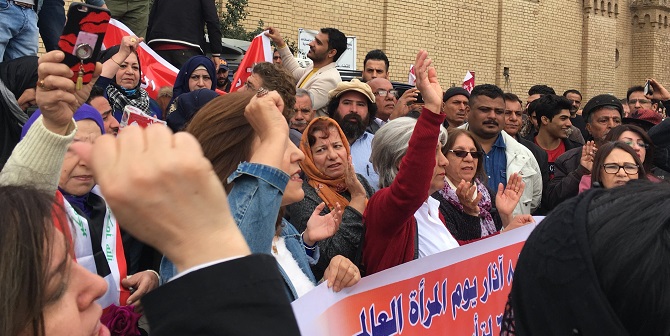