Stephen Bourne draws on his latest book to tell the previously untold story of gay men who joined the British armed forces during the two world wars. Stephen will be talking about his book at a public LSE event on 27 July 2017.

“If gay men are shown to have the capacity for bravery it makes them human, heroes even. And heroes should have freedom and independence. Britain did not want that.”

I am a community historian who has been actively researching and writing about hidden or alternative stories of some marginalised groups in Britain for many years. My aim has always been to try and change perceptions based on thorough research, and first-hand testimonies, and to write books that have universal appeal. This work began in 1991 with my first book, Aunt Esther’s Story. This was a short biography of my adopted aunt, a black working-class Londoner, who was born before the First World War. 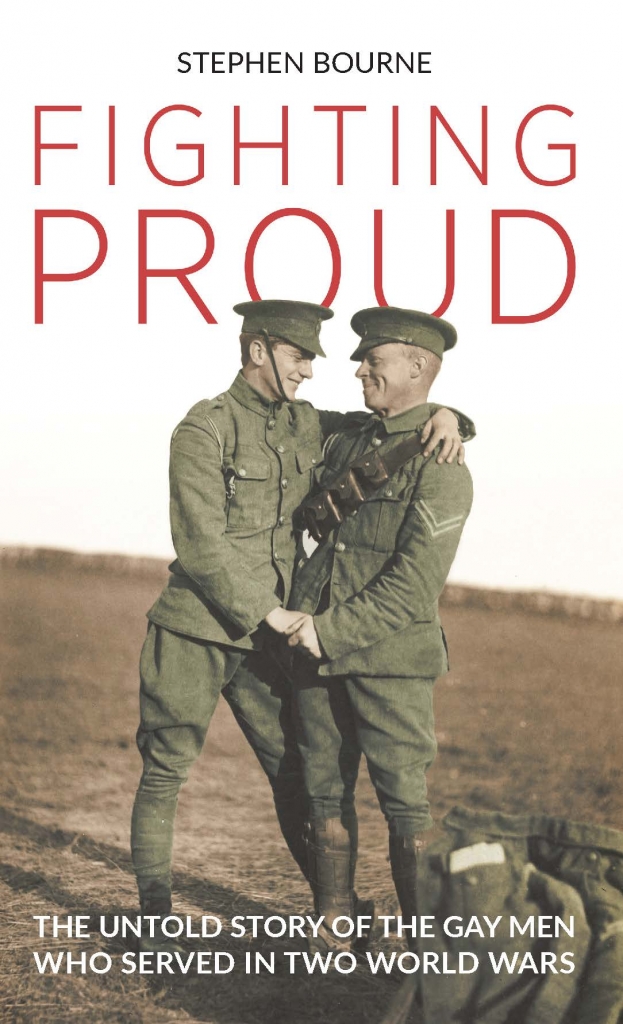 Before writing Fighting Proud I had written several books that documented the lives of black Britons in the two world wars. Black Poppies, published in 2014, focussed on the black servicemen who supported Britain during the First World War. I tried to ensure that Black Poppies was written in such a way that it would be accessible to a wide readership. Thankfully this has been the case, appealing to historians and academics as well as school children as young as eight. As a gay man who was concerned with the lack of availability of gay history books, it inspired me to consider writing about the lives of gay men in the two world wars. The result is Fighting Proud – The Untold Story of the Gay Men Who Served in Two World Warspublished by I B Tauris on 27 July 2017.

During the researching and writing of Black Poppies and my other black British history books it became clear to me that the lives and experiences of black Britons was not restricted to the racism narrative we have been encouraged to accept. For example, though racism existed in the army, after some resistance to them, black soldiers did join British regiments in the two world wars. Some integrated successfully and they were accepted by their white comrades. Others were not so fortunate.

When I started to look closely at the experiences of gay men in the Second World War, I found evidence that this was also the case with them. I came to realise that, despite homophobia, and the fact that homosexuality was against the law, gay men were accepted into the armed services, they were integrated and in some instances, became much loved and respected ‘mascots’ on board their ships, in their regiments or in their RAF crews.

The experiences of gay men were as diverse and different as their heterosexual comrades. Some were accepted, some were not. Some, like Dudley Cave who joined the army in 1940, believed the government and the armed services turned a ‘blind eye’ to their sexuality because of the shortage of manpower. But this was only for the duration of the war. Others who were discovered to be homosexual were court martialled and thrown out of the services, or worse, sent to prison. In Fighting Proud I have tried to give examples of a range of experiences, some good, some bad, and acknowledge how the draconian law that existed destroyed many lives after the war and into the 1950s, the time of the so-called ‘homosexual witch hunt.’

Attitudes to gay men in the armed services in the First World War were probably much harsher than that of the Second World War, but with the passage of time it was harder to find evidence of positive experiences in the Great War. I am certain that some gay men would have been accepted by their heterosexual comrades on the front-line, and in the trenches, but if they were found out the punishment was extremely harsh, especially in the officer class. In the case of Edward Brittain – the brother of Vera Brittain who later wrote the book Testament of Youth (1933) – the threat of exposure almost certainly led to him committing suicide on the front-line in 1918.

There were numerous stories that I found deeply moving and revelatory, too many to list here, but those I found particularly memorable were the stories of gay men who were associated with the RAF. For example, Wing Commander Ian Gleed was an incredibly brave Battle of Britain hero who was twice decorated by King George VI. In 1943 Gleed made the ultimate sacrifice for his King and country. Richard Rumbold was a troubled soul who found in the wartime RAF the companionship that was missing from his private life.

I was very impressed by the story of the writer Hector Bolitho who I had never heard of before I started writing Fighting Proud. Fortunately, Hector left a wonderful legacy of books including War in the Strand (1942), a diary of the London Blitz, and Combat Report (1943), the story of John Simpson, his friend and companion, who joined the RAF. When I read Hector’s books I discovered that he was one of the finest chroniclers of the Second World War, especially the RAF, but his work has been overlooked in many of the books I have read about the conflict.

I am also a great admirer of This Small Cloud, the autobiography of Harry Daley, published posthumously in 1986. Harry served with the Metropolitan Police as a Police Constable from 1925 to 1950. For twenty-five years he upheld the law as a policeman while in his private life he broke the law as a sexually active gay man. In the 1930s, befriended by the Bloomsbury Group, he was briefly the lover of the novelist E M Forster, but in This Small Cloud he writes movingly about his day-to-day life as an ordinary policeman during the London Blitz, and some of the horrors he witnessed.

I was also fortunate to be given permission to publish some of the wartime love letters written by Ralph Hall to his partner Montague Glover. Middle-class Montague had served as a soldier in the First World War and he began a long-term relationship with the younger working-class Ralph in the 1930s. Ralph served in the RAF throughout the Second World War and in peacetime the couple lived happily until the 1980s, despite the law that, until 1967, could have had them sent to prison if they were discovered.

What surprised me was the number of gay men in the Second World War who were not only known to be gay but were accepted by their heterosexual comrades. Some gay men who joined up did face hostility to begin with, but found that if they used humour they could overcome homophobic attitudes and make friends. Time and time again I laughed out loud at some of the funny things gay men said to overcome prejudice. “Fight crudity with crudity”, one of them said, when he joined the Navy, “and if you’ve got the pluck to do that you’ll find you make friends.”

From the start, it was my intention to write a book about gay men’s lives in the two world wars that covered the armed services and the home front. I also wanted to avoid rewriting the life stories of the gay men who I describe as ‘icons’, such as Ivor Novello, T. E. Lawrence (aka Lawrence of Arabia), Wilfred Owen, and Alan Turing because they have all been well-served by biographers. Short profiles of these important ‘icons’ have been included in a section called ‘Not Forgotten’ and this made it possible for me to focus on the gay men who have been largely overlooked or forgotten in histories of the two world wars.

Coming out in the workplace – does it help or hinder your career?

Bad Behavior has blocked 552 access attempts in the last 7 days.