Posted on February 23, 2013 by Eurocrisis in the Press

The media sector has been one of the victims of the financial crisis in Greece. Several newspapers and television channels have closed down and about 4,000 journalists are said to have lost their jobs in the last three years. 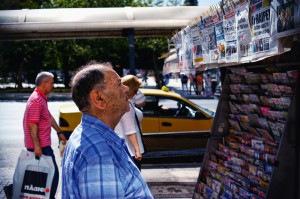 Far from being mourned as a hit to the country’s “Fourth Estate”, the closing down of media outlets, some of them with a long tradition in the Greek media landscape, has been generally seen by the public as the demise of a sector undermined by corruption and clientelistic relations with the big political parties.

As is the case with other aspects of the old political system that are in demise, however, it is doubtful whether the crisis in the media sector will be accompanied by the rebirth of the Greek press and the calls for transparency and investigative journalism will be heard.

Considering that new titles in the press are unlikely to appear during the crisis and given the current state of TV news media, with the public broadcaster remaining under state control despite promises of restructuring and the private channels owned by media moguls with strong political interests and affiliations, the future of traditional media does not seem promising.

There is optimism about online initiatives filling in the void of independent journalism, with some of the news websites combining reporting with in-depth analysis of current affairs with a focus on the financial crisis and governmental decisions. These media are increasingly popular among young educated Greeks.

At the same time, however, online media also include platforms for the cultivation of chauvinism, racism and anti-immigrant rage that present themselves as news outlets and are equally popular among disappointed and angry youths. Even if one accepts this cacophony of the online space as unavoidable, the potential of the internet and social media as a source of information and citizen empowerment in a country that lags far behind its European counterparts in terms of internet penetration (only about 50% of the population has internet access) is still doubtful.

As Greek media have not only failed to fulfil their watchdog role but are also themselves in crisis, the question of citizens’ right to information becomes urgent: in a country of political, social and economic turmoil, who will cover the crisis and with what implications for the Greek public?

This entry was posted in Greece, Maria Kyriakidou and tagged Journalism, Media Systems. Bookmark the permalink.

1 Response to Greek Media in Crisis