More than a year after the presidential elections, France is still in search of a leader 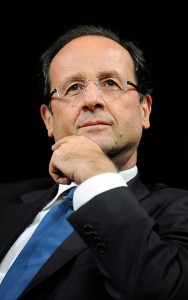 A little over a year since being elected, French President François Hollande’s popularity in the polls has plummeted as the French economy continues to struggle. Rainbow Murray writes that while Hollande’s first year has been beset by scandals and disappointments, France’s main opposition party, the UMP, have their own share of problems following a divisive leadership contest between François Fillon and Jean-François Copé. She notes that the in-fighting within the UMP may yet pave the way for a political comeback from ex-president Nicolas Sarkozy.

In May 2012, the Socialist François Hollande won the French presidential election, defeating his incumbent rival, right-wing Nicolas Sarkozy. Hollande offered two key things to the electorate: a change of style, and a change of direction. In terms of style, he offered himself as “Monsieur Normal”, a calm, grounded figure to whom everyday French people could relate, in contrast to the flamboyant, hyperactive, jet-setting, somewhat vulgar image of Sarkozy. In terms of direction, he promised to lift France out of recession by focusing on growth promotion rather than austerity. While Hollande was never inspiring even at the peak of his campaign, his opponent was sufficiently unpopular to hand the Elysée (presidential palace) back to the Socialists for the first time since Mitterrand.

A year later, the French voters appear to be regretting this decision. Hollande has distinguished himself by becoming the most unpopular president in history at each stage of his term, with a meteoric descent in popularity beginning last autumn and continuing largely unabated ever since. Whereas Sarkozy’s abrasive personality made him unpopular even when his prime minister, François Fillon, continued to be respected, Hollande’s PM, Jean-Marc Ayrault, has also nosedived in the polls. Hollande has endured a few embarrassing scandals, but the key driver of his unpopularity is the on-going economic crisis that his government seems at a loss to resolve.

In terms of scandals, Hollande has had to weather several storms. Right at the start of his presidency, his partner, Valérie Trierweiler, humiliated him after publicly backing a dissident candidate in the parliamentary elections, the same day that Hollande had publicly backed the official party nominee. This was all the more embarrassing as the official candidate in question was Hollande’s former partner of 30 years, and former Socialist presidential candidate, Ségolène Royal. This public and bitter feud between his current and former companions immediately undermined Hollande’s calm, statesman image and seemed to mirror the marital strife that had filled the tabloids during Sarkozy’s first year in office.

From personal to political, Hollande then faced acute embarrassment earlier this year after his budget minister, Jérôme Cahuzac, was embroiled in a scandal. Cahuzac was accused of tax evasion through the use of a Swiss bank account, a charge he vigorously and repeatedly denied. Hollande publicly backed his minister. However, it subsequently emerged that the charges were true, prompting Cahuzac’s exit from both the government and parliament. In the subsequent parliamentary by-election, the seat which Cahuzac had won in 2012 with 61.5 per cent of the vote in the second round was lost to Sarkozy’s UMP party. Hollande’s attempts to present a clean image free from the financial and sleaze scandals that had tarnished his predecessor were severely undermined by this scandal.

Most recently, Hollande fired his environment minister, Delphine Batho, after she publicly criticised cuts to her department in the government budget. This prompted a backlash from Hollande’s Green coalition partners, who felt that the budget cuts and the appointment of the third environment minister in barely a year indicated insufficient concern from the government for their key issue.

If these scandals have rocked Hollande’s boat, they have only briefly distracted the public from the biggest problem of all, which is the on-going dire state of the French economy. Unemployment continues to break record levels and the French deficit reduction is behind schedule. The promised growth has not come and the government is being forced to adopt some of the same austerity measures that it had decried during the campaign. Hollande has come across as hesitant, uncertain and incapable of taking the decisive action required to remedy the problem. While Sarkozy was often criticised for being too energetic, dynamic and quick to respond to issues, the contrast offered by Hollande has also done little to please. So slow has he been to show any kind of leadership on the issue that the door is slowly opening for a comeback for Sarkozy.

On the night of his electoral defeat, Sarkozy announced his complete withdrawal from public life. In the year that followed, he largely honoured this promise. However, it is becoming increasingly clear that we have not seen the last of the former president. His gently staged comeback has been helped not only by the woeful performance of the Socialist president, but also by the leadership vacuum and internal rivalries that have kept the UMP in turmoil over the past year.

The election held last summer to find a new party leader was nothing short of disastrous. François Fillon and the party’s outgoing general secretary, Jean-François Copé, emerged as the two front-runners. They coveted not only the prize of presiding over the party, but also the hope of becoming the default presidential nominee for the 2017 race. The leadership contest was therefore very fiercely contested and incredibly close-drawn.  So close, in fact, that both candidates declared themselves the victor, with Copé’s initial claim to victory being undermined by Fillon’s claim that a group of votes had not been counted whose inclusion tipped the scales in Fillon’s favour. There were widespread claims that Copé had abused his position within the party to influence the outcome. Nonetheless, he emerged the victor.

Furious, Fillon created a dissident party, thus splitting the parliamentary party. Party heavyweights Alain Juppé and eventually Sarkozy himself were called in to help sort out the ruckus. Promises were made to rerun the election a year later in order to placate Fillon’s supporters and create a fragile unity within the party. However, subsequent negotiations have led to an agreement, supported in a membership ballot, to suspend another leadership contest, with Copé remaining at the helm at least until 2015. The party realised that another fratricidal summer would be a gift to the beleaguered Socialists. Instead, thoughts have already turned to the presidential primary for the 2017 election, with Sarkozy starting to work his way back into the running.

Yet Sarkozy himself has not been immune to scandal, even since stepping down as president. Aside the on-going trials relating to scandals begun during his presidency – such as the claim that L’Oréal heiress Lilianne Bettencourt made illicit campaign contributions to the UMP – Sarkozy has now had his expenses for the 2012 presidential election rejected by the Constitutional Council, on which he has default membership as a former president. In addition to being embarrassing, this decision is highly costly to the UMP, leaving it more than 11 million euros out of pocket. Added to the losses they incurred by a downsizing of their parliamentary party following their 2012 election defeat (with the party receiving state funds for each seat it wins), and on-going losses of millions of euros per year for failure to respect France’s gender parity law, the party is now in real financial difficulties. The decision prompted Sarkozy to resign from the Constitutional Council, which actually facilitates his return to electoral politics. However, Copé, Fillon et al will be keen to defend their turf, so the battle for control of the UMP is set to rage for some years yet. With Hollande looking increasingly likely to be a one-term president, all eyes will now be on 2017 to see if the French can finally resolve their on-going leadership vacuum.

This entry first appeared on the LSE EUROPP blog

Dr. Rainbow Murray – Queen Mary, University of London Rainbow Murray is a Reader in Politics at Queen Mary, University of London, and a visiting research fellow at CEVIPOF (Sciences Po, Paris). Her research interests lie in political representation, gender and politics, candidate selection, French and comparative politics, political parties and elections. She is currently conducting a major study of the French parliament. She is the author of Parties, Gender Quotas and Candidate Selection in France (Palgrave, 2010).

This entry was posted in France and tagged 2017 elections, French economy, Hollande, leadership vacuum, Sarkozy, UMP. Bookmark the permalink.
We use cookies on this site to understand how you use our content, and to give you the best browsing experience. To accept cookies, click continue. To find out more about cookies and change your preferences, visit our Cookie Policy.