Eurozone Crisis: Another Chapter in the Never-Ending Saga of Boom and Bust

Posted on February 21, 2014 by Eurocrisis in the Press

The policy response to the euro crisis since 2008 has been an extremely protracted affair, set against the backdrop not only of containing financial and sovereign debt crises and managing the risks of financial contagion (more normally associated with emerging economies) but also of the possibility of the euro’s extinction – at least until the European Central Bank made assurances in July 2012 that it would do “whatever it took” to save the euro, a declaration that reverberated around global financial markets and acted as a necessary precondition to the effectiveness of a long-term policy response (the jury is still out on the latter, of course).

So even though the policy debates continue, things are now looking up.  In those countries most affected by the crisis sovereign borrowing costs are falling, growth is returning tentatively.  While it will be some time before the positive impact of these developments are felt by all (unemployment remains high, for example) most are starting to agree that the worst is over.

But for all of the effort that has been applied to tackling the problems of the Eurozone, in the grand scheme of things we have only won a time-limited reprieve. This is not a comment on the efficacy of the policy response, or on whether more (or less) Eurozone reform is needed.  The euro crisis is merely the newest version of a tale that has been told repeatedly since the Industrial Revolution. Nothing that has been done now will end this story.

What do I mean by this?

A tale of boom and bust

The answer lies in the fact that most economies within the modern economic and financial system (i.e. those characterised by a relatively free price mechanism, private land tenure, a well-developed banking system, etc.) go through cyclical patterns of expansive followed by depressed economic activity, and have done so in a series of remarkably regular 18-year episodes (on average) since the Industrial Revolution. For some reason this cyclical behaviour has been under-researched to date, although the recent “Great Recession” and subsequent financial crises around the globe have revived interest in this subject.  At the end of each of these 18 year cycles there is a major banking, financial and often sovereign debt crisis, in response to which governments, central banks and international financial institutions come together to initiate reforms that, while (arguably) effective in the short-term in engineering a recovery, singularly fail to stop the next one.

In the four to five years since the crisis started, we have merely followed the same pattern.

How the economic cycle unfolds

In broad terms, the cycle is driven by two major factors: speculation in real estate (land) and lending (credit creation) against the massive increase in real estate (in reality, land) values that are generated by such speculation.  Why land speculation is so important in this process is discussed further here.  It is telling that most economic models used by key decision-makers do not even consider land as a separate factor of production; nor indeed reflect the fact that banks create the vast majority of an economy’s money supply through their lending (in reality credit creating) activities.  The interaction of these two features of real-world (as opposed to theoretical) economies is responsible for these cycles.

Once you understand this you will see that the cycle unfolds as follows:

1. The first act of the 18-year cycle begins as the wreckage of the previous cycle is cleared away, where economies move from recession back to growth and business conditions pick up, unemployment eventually comes down and consumer spending returns.  This leads to the first expansion of an 18 year cycle.  The process is slow to begin with and the first green shoots of recovery are often hidden from view as the media coverage is often still gloomy.

This is where the Eurozone is now.

2. After a few years of expansion (on average six to seven) an increasingly confident economy may experience a mid-cycle slow down or recession.  This slowdown is the traditional version of a business cycle downturn where supply may outrun demand or vice versa.  Such contractions generally prove to be short-lived and tend not to be financial in their nature, i.e. they do not implicate the financial system.  Such recessions are shorter and less severe in their impact than the ones that take place at the end of the cycle.

Sometimes, at least in terms of official data, these slowdowns are avoided – leading to much self-congratulation among economic policy-makers on their management of the economy.  Their satisfaction, however, will prove to be short-lived.  European countries experienced this phase during 1994-2001; there was a very limited slowdown around 2001/2.

3. The next act of the cycle is the second expansion – the economic boom.  This lasts on average another six to seven years. Speculation plays as much of a role in this boom as does business expansion, though standard economic data may not distinguish between the two.  In this phase of the cycle, higher demand for real estate (land) is more obvious; and land is more expensive to acquire, mortgages comprise an increasing proportion of the loans made by the banking system, the quality of a bank’s loan book is increasingly predicated on high land values.  A characteristic of this phase is easy credit and relaxed lending standards.  The final part of this phase involves frenetic real estate activity, both in terms of house building and in buying and selling.

The newly-formed Eurozone went through this phase between 2001 and 2008.  House prices rose around 45 per cent during this period, compared to 28 per cent in the first phase of the cycle (see Figure 1 below). 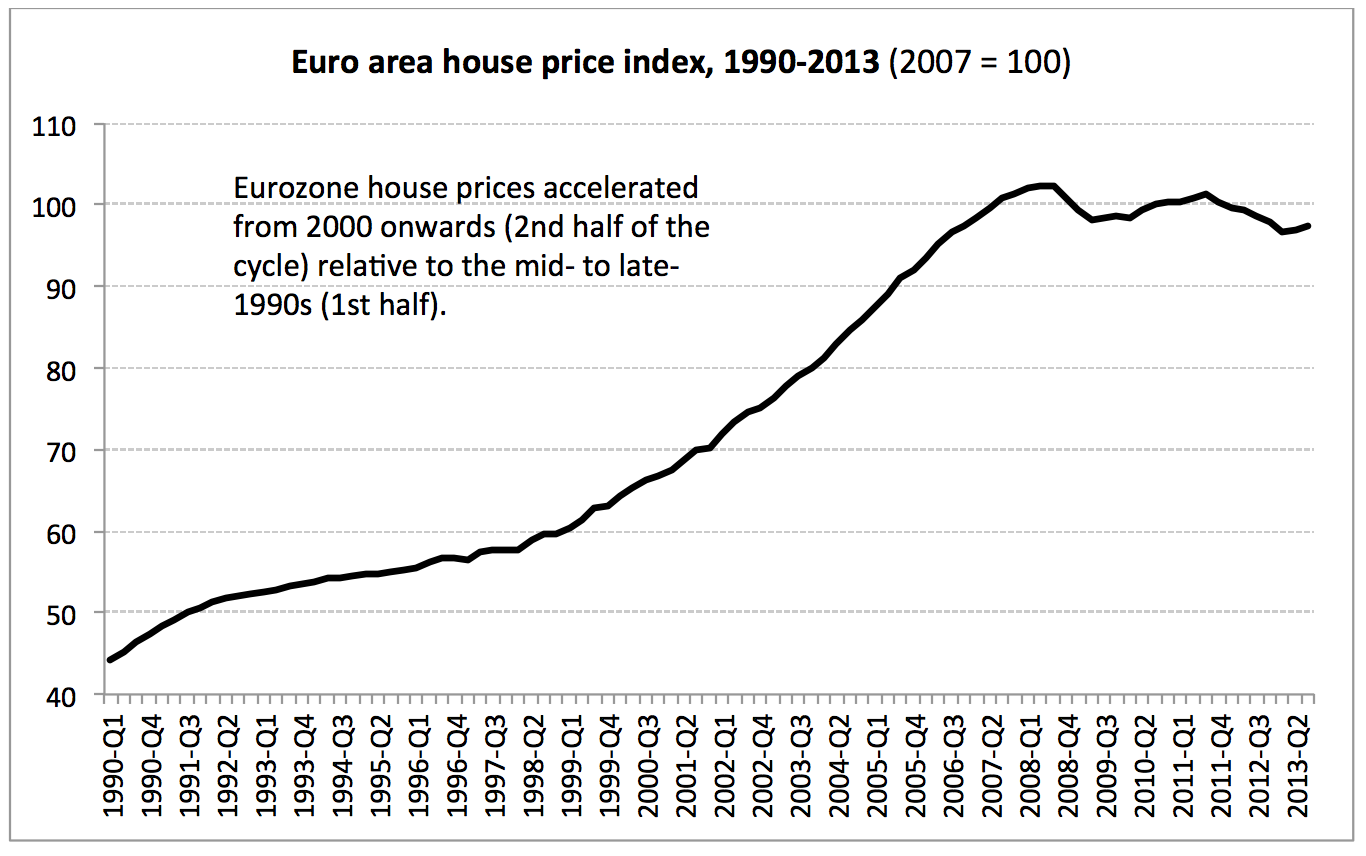 4. The final great act of the cycle is the crash.  At some point the cycle can no longer continue to support ever increasing land price.  In speculative markets, if prices are not increasing they are falling.  As speculation stalls, prices fall, in some areas, dramatically.  Unlike other contractions, the problem with such falling prices is that the banking system faces the real possibility that loans outstanding exceed the collateral value of assets they were created against and that people are no longer able to meet their loan obligations. Such problems disrupt the normal operation of the banking system (e.g. inter-bank lending) and can lead to a full-blown economic crisis, severe contraction in an economy’s money supply, and a stock market correction or crash. Such problems result in the need for large scale intervention in the banking system by government; the cost of such bailouts is often huge additional borrowing which then results in reduced public spending in other areas, exacerbating or elongating the recession.  Right on schedule, every 18 or so years.

This describes what has happened in Europe since 2008.  In addition to economic contraction, house prices in most Eurozone countries experienced several quarters of negative growth and Eurozone stock indices fell sharply (e.g. the Euro Stoxx 50 was down by over 60 per cent between July 2007 and March 2009 – see Figure 2 below). 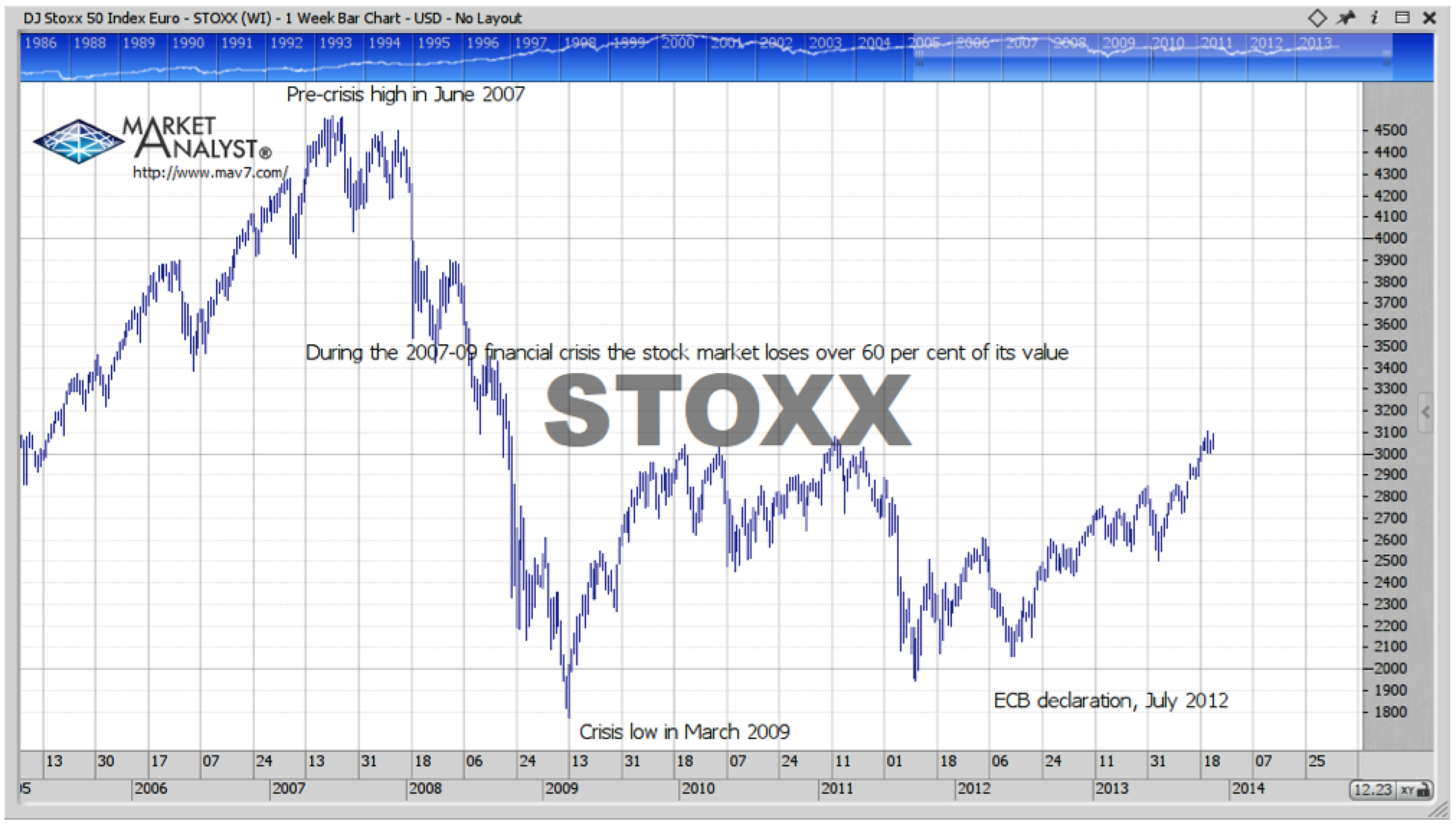 Eventually the wreckage is cleared away and conditions are ripe for renewed activity and the economy turns back to the first phase noted above.  A stylised view of the cycle can be viewed here and a more detailed overview of the cycle and a demonstration of its regularity is set out here, covering US economic history since 1800.

The cycle is repetitive because the structure of the economy does not change. Far from making use of a crisis to drive change, the policy response at the cyclical downturn is designed to preserve the current system. The standard bag of tricks include the following:

The policy response is complicated when external creditors are involved. Often the response is designed to protect the repayments of loans, after which the country is left to sort out its own problems. Citizens in the Euro periphery are perhaps now rather more familiar with this process than they ever wished to be.  Since 2008 central bankers take all of the standard steps to engineer a recovery – and guarantee another cycle of boom and bust.

If you understand the cycle you have an invaluable economic framework to understand what is going on and what will happen next.

What will happen next?

We are now coming up to four or five years since the crisis started and we can see, regular as clockwork, the worst is over.  There will now be a period of 12 to 14 years of economic expansion, interrupted as past periods of expansion have been, only by a relatively short mid-cycle slowdown. For various reasons, I think it is likely that the next cycle will be huge, with more wealth created in this period than in any equivalent period in human history. But there will be another bust, and like the boom before it, it is likely to be large. By 2025/26, following over a decade of strong growth in which European countries will participate fully, driven in part by relentless technological innovation, increased productivity, the rise of strong Asian and Latin American middle classes, and capital superabundance conditions will be ripe for another major downturn.

Few will see it coming.  Except, maybe, you.

Akhil Patel is the Director of Ascendant Strategy. He holds Masters degrees in Public Policy (LSE) and Finance (Westminster) and a first degree in the Classics from Balliol College, Oxford.

5 Responses to Eurozone Crisis: Another Chapter in the Never-Ending Saga of Boom and Bust