By Marina Prentoulis and Lasse Thomassen

The 2011 movements of the squares, the ‘aganaktismenoi’ and ‘indignados’ as they came to be known in Greece and Spain respectively, brought to the forefront old and unresolved debates on the Left. During the crisis it became evident that the traditional Left failed to capture the popular imagination. As part of parliamentary politics, and together with the rest of the political establishment, the left had itself lost legitimacy, at least among a large part of society, and non-representational alternatives started to be entertained. The debates emerging from the movements were a response to the failure of the existing economic paradigm and an alternative economic vision challenging neo-liberal capitalism took front stage. Yet, at the heart of the movements was the realization that, without a political alternative compensating for the democratic deficit in the respective countries, such an alternative would be impossible. Resistance to the economic programmes of the troika (the IMF, the EU and the ECB) had to come from the ‘people’, the political actor who had been excluded from the decision-making process. Although the crisis was identified as economic, there was a sense in which the crisis concerned politics as well – indeed the crisis was of a general character to the extent that it could not be limited to a particular part of society. 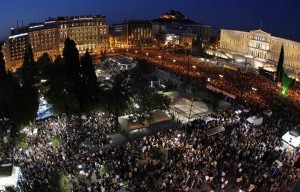 Despite the fact that the cornerstone of Leftist discourse is the challenge of the economic capitalist model, the movements of the squares rejected the parties of the Left and the trade unions as part of the system in crisis or, at least, as unrepresentative. The protesting crowds in the squares demanded their ‘voice’ to be heard and started to entertain the idea of a different form of political organization outside formal political institutions. Within this discourse, ‘autonomy’ and ‘direct democracy’ were used as a counterpoint to parliamentary politics as we know it. It is also telling that the traditional left was the most severe critic of the movements. The newspaper of the Communist Party of Greece (KKE), for example, argued that the movement did not represent any danger to the establishment, had no alternative political suggestions beyond the immediate rejection of the government and the austerity measures, and for this reason it was ‘palatable’ to the mainstream media and some political centres alike. Effectively, it represented the protesters as in need of ‘enlightenment’ and guidance.

The mutual suspicion between the Greek Communist Party and the movement of the squares opens an old debate within a new, contemporary framework: How will emancipation come about? How will a new economic and social order emerge? Will it only come about through a hegemonic agent? If so, who will that agent be: the Party, a particular class or the people? Conversely, is emancipation only possible though a more autonomous form of organization -decentralized, spontaneous and without representational hierarchies?

It is our contention that a dialogue between hegemony and autonomy is necessary in order to properly grasp the movements of the squares and to think about radical politics for the future. We reject viewing the mutual suspicion between the two trajectories of hegemony and autonomy as a matter of either/or. That mutual suspicion has a long history, and it was exemplified in the events of May 68. When the workers’ and students’ movements exceeded any strict class identification, rejected all forms of authoritarianism and put forth a much more political and radical agenda than that proposed by the unions and the Communist Party, the latter perceived the rebellion as either misguided or in need of a Communist leadership which would contain and direct the events. From May 68 new trajectories have emerged: not only a widespread criticism of the authoritarianism and the inability of the Left to be part of more diverse and spontaneous movements in action, but also, in theoretical terms, a critique of the inability of Marxist theory to account for events that place politics from below at the centre of any future initiative. 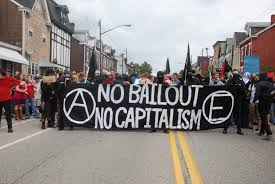 Although May 68 made visible the gap between the two positions of hegemony and autonomy, long before that, Leninism was clear about the theoretical incompatibility of the two positions. For Lenin, the spontaneous movement of workers and the theoretical consciousness of the movement could not coincide. Without the leadership of the party, a workers’ movement would remain in thrall to bourgeois ideology if it did not submit to the socialist party: ‘We have said that there could not have been social-democratic consciousness among workers. It would have had to be brought to them from without’[1].

This sharp distinction between the masses and the party, between those who act and those who think, remains problematic throughout the history of Marxism even if later theorizations have tried to compensate by focusing on the organized leadership of ‘the people’. For instance, Gramsci placed the role of the workers’ councils at the central stage, challenging thus the Party as the true representative and embodiment of the dictatorship of the proletariat. Having said that, Gramsci did not offer a fully developed theory of the relationship between the spontaneous movement from below and the Party. The anarchist theoretical tradition has been vocally against the division and the appetite for centralized power endemic to Marxism. Bakunin sees in the professional revolutionaries of the Party only another dictatorship and he himself favours the spontaneous activity from below[2]. According to Todd May, this anarchist commitment rests on two further arguments: first, that, if given the choice, people will naturally and spontaneously act towards justice; and, second, that creating equality can only come about when acting on the presumption of equality[3]. In this respect, it is only through organization from below that emancipation is possible.

This quick sketch points to a fundamental debate within political theory and practice today. For one part of the Left, political action, revolution or resistance will come about when the ‘multitude’ or ‘the people’ submit themselves to a hegemonic force. The diametrically opposite view is that the ‘multitude’ or ‘the people’ will constitute themselves as a force and will act spontaneously in order to bring about emancipation. Between these two extreme positions, the key question today revolves around the possibility of hegemony without a vanguard on the one hand and a self-organization that is not immediate and spontaneous on the other. To put it differently, the question is what form hegemony after Gramsci and multiplicity after anarchism will take.

This post is an extract from the forthcoming book (June 2014) Radical Democracy and Collective Movements Today, edited by A. Kioupkiolis and G. Katsabekis, Ashgate.

It was first published in the Greek newspaper Avgi, February 9, 201

Dr Marina Prentoulis teaches Media and Politics at the University of East Anglia. She completed her PhD in Ideologies and Discourse Analysis at the Department of Government, University of Essex. She has lectured in a number of universities including City University, Open University and University of Middlesex.

Dr Lasse Thomassen teaches Political Theory at Queen Mary, University of London. He holds a PhD in Ideology and Discourse Analysis from the University of Essex. He was a García Pelayo Fellow at the Centro de Estudios Políticos y Constitucionales in Madrid from 2008 to 2011.

Related articles in LSE Euro Crisis in the Press: