Posted on November 6, 2014 by Eurocrisis in the Press 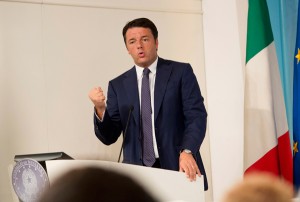 The young and dynamic Italian Prime Minister Matteo Renzi is determined to change the way politics is perceived and conducted in Italy. He has promised to deliver an ambitious economic and institutional reform agenda, but his task won’t be an easy one.

Since he came into power, after snubbing his political ally Enrico Letta by ousting the former highly respected (especially among EU leaders) Prime Minister, he has demonstrated a practical and cynical approach in running the government and leading his party. The weekly Espresso has described the 39 year-old Renzi as a sort of Italian Underwood, making reference to House of Cards, the American political television series based on the novel by Michael Dobbs, of which the Italian premier is a declared fan. Unfortunately for Renzi, Italy’s institutional realm is less fictional and more complicated to navigate than it might look from the outside. Indeed, Renzi has the daunting task of dealing on one hand with both Mr Berlusconi and with Mr Grillo, the former PM and a former comedian, and on the other hand with a fragmented minority within his own party led by former PD (Partito Democratico) secretary Pier Luigi Bersani. Moreover, to add additional drama, he’s in a coalition government with junior partner NCD, led by interior minister Angelino Alfano, Berlusconi’s former right-hand man. However, Renzi has vowed to survive with his 1000 day programme through to the end of the parliamentary term in 2017, since he considers his party’s strong performance in the European elections in May to have been sufficient to guarantee his mandate.

Renzi has paid particular attention to the voice of citizens asking to reform politics by starting to reduce the privileges enjoyed by politicians. He has frenetically worked to reform the Senate power and to slash the number of parliamentarians as part of his institutional reform agenda. This would mean that the government will no longer need the backing of the Senate, which will be smaller and indirectly elected, and will retain less legislative authority. On the other hand, he has promised to deliver the long awaited electoral law reform, which will change the ‘majority bonus’ system, which provides a governing coalition with extra seats to ensure a working majority, and will review the threshold for smaller parties to enter Parliament. To carry out such reform, Renzi has entered into a “secret” deal with Mr Berlusconi, which is viewed by many of his supporters as his Achilles’ heel. However, Renzi has justified the move, saying that on institutional reform Italy needs the largest possible consensus of all parties, including those sitting on the opposition side.

Undoubtedly, the most challenging and pressing issue that Renzi faces is the steep decline of Italy’s economy, which is expected to contract by -0.3% in 2014, and even the most optimistic government’s prediction see growth as a mirage, something that will not happen at least until 2015. To overturn such a gloomy scenario, Renzi has pledged to accelerate the pace of economic reforms, starting with labour and justice reforms. The latter is considered to be essential if Italy is to attract more domestic and foreign investment. Indeed, the average length of a civil trial – about eight years – is far longer than in the rest of the euro area. But the overhaul of the labour market is perhaps even more critical if the country is to regain its competitiveness and improve productivity, which still lags far behind that of most developed economies. IMF’s Andrew Tiffin suggests that “rising wages in Italy, although relatively modest by regional standards, have nonetheless outpaced productivity growth by a substantial margin, placing Italy at a growing disadvantage compared to its European peers”. However, to change the labour market Renzi will have to go through an ideological battle within his own party and with vested interests, namely powerful trade unions such as Cgil. At the heart of this battle, the most contentious matter is the revision of Article 18 which gives significant protection against dismissal, though it impedes greater flexibility of the market. The article, which dates back to the 1970s, forbids companies with over 15 employees from firing people without “a just cause” and prescribes immediate reinstatement in case of “unfair” layoffs. But, Renzi is determined to overcome this “ideological totem” and “outdated” obstacle as he has described it. To do so, he will have to win the resistance of trade unions that have already promised a nationwide strike in case of a decree abolishing article 18 will be passed. Moreover, Renzi has to face the opposition of senior members of his party like former PM Massimo D’Alema and former PD secretary Pier Luigi Bersani, who still don’t forgive Renzi for defining them as the “old caste” gaining him the nickname of the “Scrapper”.

On the contrary, if the domestic scenario still holds many impediments for Renzi’s ambition to change Italy’s future, things do seem more rosy at European level. Renzi has claimed victory over the appointment of Mrs Federica Mogherini as the new EU foreign chief, seen by many as the most prestigious portfolio in Brussels, as well as over more flexible fiscal rules in the EU. Indeed, Renzi’s proposal for greater flexibility in countries pressing ahead with structural reforms has also been welcomed by ECB president Mario Draghi, with whom Renzi maintains regular interactions. Renzi, who is also President of the Council of the European Union since July 2014, has also pledged to make Italy a more prominent partner in Europe. Certainly, with President Hollande facing the highest rate of unpopularity among recent French presidents, Merkel has found in Mr Renzi a young and dynamic new major interlocutor. Nonetheless, Renzi has explicitly disputed the way the “Brussels machine” is run, saying Europe needs to rediscover energy, ideas and values lost in years during which the only preoccupation has been with accounts and budget sheets, as he argues that the ball should return to the hands of politicians rather than to those of technocrats. Renzi is, though, fully aware that he still has a long road ahead before he can place himself in a position to dictate changes in Europe, and he must first deliver at home by doing his “homework”, a task which still seems far from easy.

Giovanni Puglisi is a freelance journalist. He writes regularly for Futuro Europa with a particular focus on British politics. Mr Puglisi holds an MSc in European Social Policy from the LSE and a PG Diploma in Communication, Journalism and Public Affairs from Il Sole 24 Ore Business School.