Ahead of an LSE debate tonight on Greece’s economic crisis, Vicky Pryce reflects on what has led to the current situation, how Greece might return to growth, and whether or not the Euro has a future in its present form.

What do you think has led to Greece’s current crisis? Do you think the EU could have intervened earlier to prevent it?

There are lots of different views on how Greece’s crisis happened – whether it was their inability to deal with the financial crisis when it occurred, or from years of overspending while at the same time failing completely to make the investment or structural reforms necessary to maintain competitiveness. Greece’s economic weaknesses wouldn’t have come out into the open if the financial crisis had not hit in the way that it did, and of course it affected other countries too, so Greece wasn’t unique in this respect.

What is unique about Greece is that, in terms of its own competitiveness, it did very little to improve itself during the long period it was enjoying the benefits of no longer having balance of payments constraints. Everyone, in particular the government, went on a spending spree. That meant that there was no magic wand to wave when the crisis came, because nothing was within Greece’s ability to control anymore; it did not have any monetary policy or the ability to impose capital controls. If the European Union, particularly the Germans, had intervened earlier when it was obvious that Greece needed more help than had been previously envisaged because of its very high debt to GDP ratio, the problem would have much smaller and the economic contagion would not have spread as much as it has done so far.

Do you think it would be a good idea for Greece to exit the Euro?

No, I think the implications for Greece would be worse. They would not be able to borrow again, but they would still need to because the tax regime is so poor and its public sector spending is still so high, especially with current unemployment levels. The country would go bankrupt and the IMF would have to intervene very significantly. All the evidence suggests that there would also be hyperinflation. Greece is not like Argentina- it does not have many commodities to sell, or anything that would benefit very much from devaluation, except for possibly tourism.

In addition, leaving the Euro would expose Greece to a similar kind of government it had previously. There would be no real reform and no real desire to push for change. One of the reasons why the Greeks were keen to join the European Union was that they were hoping that they would be controlled byBrusselsrather than by their own politicians, but that hasn’t really happened. There has been a failure of the system as a whole.

If exiting the Euro is not an option, what is the policy package that you would prescribe to Greece?

Greece needs reforms to liberalize its markets. Greece is very much like a Soviet-style economy – controlled by a strange mix of government and the unions, with a few large vested interests. It really needs to open up and become a lot more like a Western democracy, which it isn’t at present.

So Greece needs many structural reforms. But it also needs to write off all its debt and to start again. And it needs to see even more money coming in from the European Union, especially in terms of Structural Funds.

Many commentators argue that the austerity measures Greece is currently implementing are only weakening the country’s economy. Do you think there is any alternative to austerity?

Austerity is the only prescription that the IMF knows and accepts, but Greece actually now needs a lot of money to come into its economy, either through foreign direct investment or through the EU. The period of austerity may have to come to an end soon, because there is a limit to how much you can get the economy going by internal devaluation – the pain eventually becomes politically unacceptable.

The expectation tha Greece can follow such a harsh path to cut its deficit is very unhelpful and very unrealistic.  In my view, the austerity measures need to be eased, so that Greece is able to return to the path of what is required by the new Fiscal Compact. Greece’s debt needs to be cleared and longer given for the process of fiscal consolidation on the condition that the country then undertakes the necessary reforms. Once those reforms occur, more money can then be allowed in.

There are twenty billion Euros in Structural Funds that have not come yet to the country, one reason being the previous matching requirements (through the European Structural Funds). But now the matching requirements have been reduced significantly, and my recommendation to the EU taskforce in Greece right now is that you do not need to worry about this at all – just spend the money on the infrastructure which is crucially needed in Greece.

After Greece’s latest debt swap, the rating agency Fitch has moved the country’s credit rating to a B-. Do you think that Greece’s debt status will be rated above junk status anytime soon?

No, and in fact I wonder how long the B- will stay.

Do you think the Euro in its present form will still be with us in five years’ time?

I think there is a fifty-fifty chance. While it’s not easy to speculate about what might happen, it is possible that a Northern European Euro will develop, with the Southern countries then returning to their original currencies. There have also been suggestions of a two-tier-Euro, or that Euro countries could be allowed to devalue the Euro up to, let us say twenty-five percent of the currency’s average exchange rate. Whatever happens, it will be an expensive business. There will have to be a great deal of political will to keep the Euro going, but I think that there is a good chance that it will still be there in five years. I do have some concerns, especially on the growing nationalism inEuropenow. The Euro will be different in the future, than it is now, because there will be more fiscal cooperation, but not political union. If anything the events of the last few years have suggested the opposite – countries are moving further apart.

Vicky Pryce will be speaking at the LSE Hellenic Observatory & Hellenic Bankers Association-UK panel debate Can Greece get out of the crisis? on 28 March. More details.

Vicky Pryce – FTI Consulting
Vicky Pryce is a Senior Managing Director in FTI’s Economic Consulting practice, and is based in the London office, leading on business economics, working with leading companies on issues from corporate strategy to public policy. Prior to this, she was Director General, Economics & Chief Economic Adviser, Department for Business, Innovation and Skills (BIS), 2002-2010 and Joint Head, UK Government Economic Service, 2007-2010. 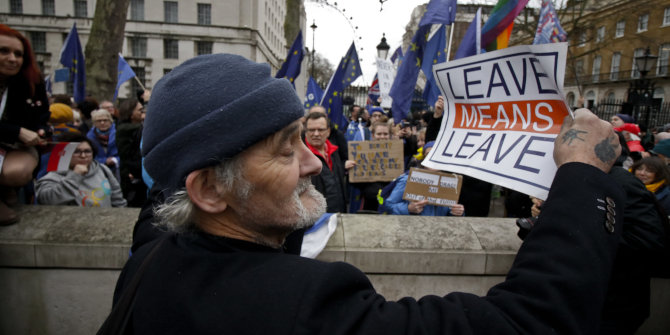 The implications of Brexit for the UK economy