The European debt crisis is forcing governments to cut their budgets. Daniel Möckli argues that the net effect of this crisis will be a strategic weakening of Europe. But he also points out that the current age of austerity may turn into an opportunity for more defence cooperation in Europe. Governments are beginning to implement ‘smart defence strategies’; the pooling and sharing of their military capabilities.

The debt crisis has hit Europe hard. Many countries have been forced to resort to austerity measures not seen in decades. Drastic spending cuts, tax increases, and structural adjustments have led to growing economic hardship, particularly in Southern and Eastern Europe. The EU-27 unemployment rate has risen to 10 per cent by early 2012. Almost a quarter of Europe’s young people (below 25) are without a job. Social unrest has grown and may yet intensify should the situation in countries like Greece, Spain, Portugal, or Hungary deteriorate further. Across the continent, domestic politics have been shaken by the crisis, with several governments ending prematurely. While electorates are still voting responsible leaders into office in most places, trust in public institutions and democracy is eroding, and populism is on the rise.

The European Union has been badly bruised by the debt crisis too. Its single currency, long praised as the key symbol for Europe’s unity and a major source of integration, has unleashed highly divisive dynamics. For several Eurozone member states, it has actually become a main cause of their economic difficulties. EU crisis management has proven to be exceedingly slow and is subject to much controversy. While the process of European unification has seen many difficulties in past decades, the current crisis is more severe than any before. To be sure, talk of a collapse of either the euro or the EU seems premature. The European project is bound to last. The EU may even resurge in a more unified and more competitive shape one day. But there is little doubt that its troubles will not go away anytime soon. Europe faces a period of austerity in more than just economic terms.

These developments do have strategic consequences. Some of these consequences concern the outside world, as the state of the EU economy has a major bearing on the growth potential of many other countries, including China. First and foremost, however, the debt crisis has major repercussions on Europe itself. Three such repercussions, which collectively amount to a strategic weakening of Europe, come to mind: First, as a result of Europe’s economic and political malaise, the nature of the European project is changing. The current power shifts within Europe, the sidelining of EU institutions, the increasing fragmentation among member states, and the growing legitimacy deficits of the EU are all weakening the role of the EU as a major anchor of stability in Europe.

Second, Europe’s long-term relative decline in the global context has been accelerated by the debt crisis. Its share of economic power is shrinking ever faster. Its global standing has taken a blow by the way in which it has handled the euro crisis, not least since it has become the object of IMF intervention and felt compelled to woo emerging powers for financial help. Much more significantly, the EU’s capacity to implement a common foreign policy and defend collective European interests in an increasingly non-Western world has been further diminished. Its inability to come up with a strategic response to the monumental changes that have occurred in Southern Mediterranean countries since the beginning of 2011 speaks volumes in this regard. With its Common Foreign and Security Policy (CFSP) receiving less attention and fewer resources, and with cohesion and trust among member states decreasing, any positive post-Lisbon effect has largely been undone. Table 1 describes the percentage changes in defence expenditure from 2008 to 2010. Foreign policy is being renationalised in crisis-driven Europe, which bodes ill for the EU’s ability to project stability to its neighbourhood and play a global role commensurate with its economic weight. 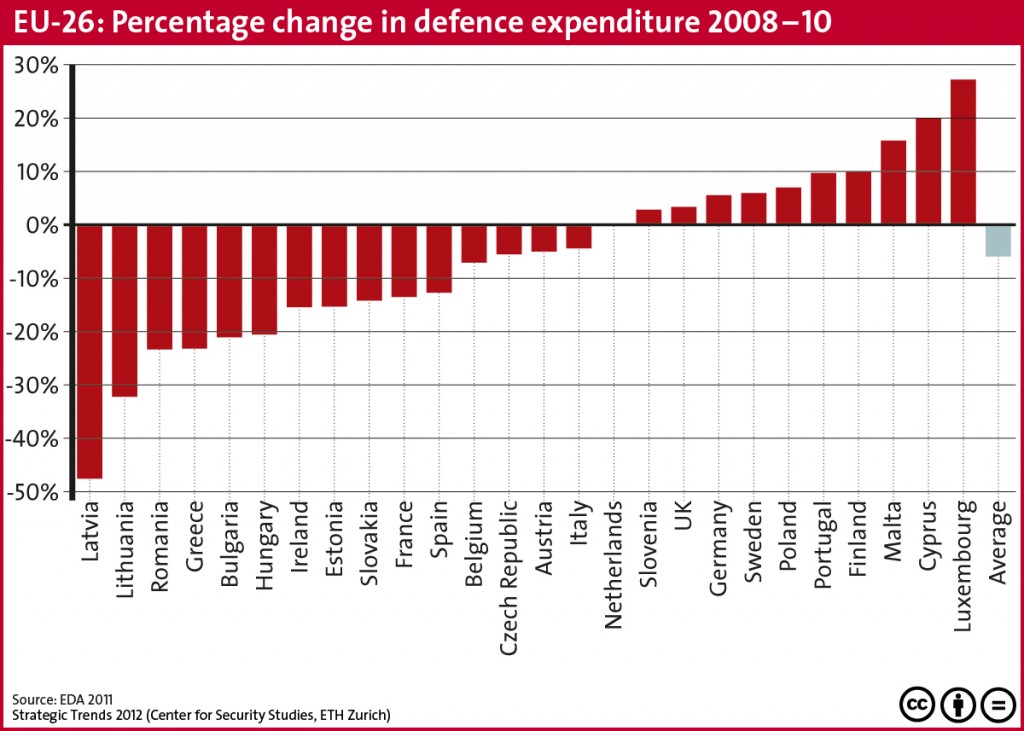 Third, the debt crisis has also left its mark on European defence. In many European countries, armed forces had been underfunded well before the recent fiscal straits set in. But the dramatic new cuts now being decided in numerous capitals (see Table 2 for a few examples), coupled with the lack of coordination in reducing national military capabilities, suggest that Europe may be reaching a tipping point as far as the credibility of its defence and military crisis management capacities are concerned.

There are those who predict a gradual ‘demilitarisation’ of Europe. However, in the case of defence, it seems just conceivable that the debt crisis may actually have the positive effect of pushing states towards more ‘pooling and sharing’ or ‘smart defence’, eventually leading to a ‘remilitarisation’ of Europe. A case in point is the ‘Ghent Initiative’ that has recently resulted in EU defence ministers identifying 11 priority areas for collectively developing and maintaining military capabilities within the framework of the European Defence Agency.

This last point does suggest that the debt crisis will not necessarily only have bad outcomes for Europe. Less money will mean more incentives to set priorities. Less cohesion implies a new potential for multi-speed policy solutions that allow countries other than the EU-27 to secure a bigger stake in the European project. By shedding light on deficits and weak points, crises generally provide opportunities to adapt and put things on a firmer footing. On balance, however, the net strategic effect of the current economic and monetary turmoil for Europe is bound to be negative.

This article is based on a longer piece by the author on the implications of the European debt crisis on military policy,  published here.

Daniel Möckli is a Senior Researcher at the Center for Security Studies (CSS) at ETZ Zurich. He is the editor of both Strategic Trends and the policy brief series CSS Analysis in Security Policy and heads the Strategic Trends Analysis team. Möckli’s fields of research concern Western strategies towards the Middle East, European foreign and security policy, and Swiss foreign and security policy.