The new book from Michael Mitsopoulos & Theodore Pelagidis provides a good and honest account of the Greek economic crisis, focusing on issues that are both sensitive and critical: nepotism and corruption. At a time when elections are fast approaching, Daphne Halikiopoulou finds this book to be extremely relevant and topical.

This book examines the origins of the Greek economic crisis and its political dimension. It is a book that tells it like it is, focusing on long-term structural problems including corruption, clientelism and the lack of accountability. The book provides a political economy explanation of the crisis that focuses on the attempts of interest groups to use the weakness of the Greek political institutions and governance in order to maximise their gains. Thus a rational choice approach governs the main rationale of the argument: the focus is on the individual behaviour of separate agents taking advantage of the economic, political and social system within which they operate.

More specifically, according to the authors, the Greek crisis is a product of aggressive rent-seeking predator groups within a context of lack of accountability and the failure of the rule of Law. The authors’ main puzzle is why an economy that appeared to be experiencing high and constant growth rates in the late 1990s and early 2000s hit rock bottom so fast and so unexpectedly. If they are right, this is not a puzzle at all. If the causes of the crisis are structural and long term, deriving from poor performances and pathologies in the political and labour markets allowing rent-seeking groups to maximise their gains in non-transparent ways, then the high growth rates of the previous decade were only superficial, and Greece is simply a “straightforward textbook case of modern economics and political economy”: a bubble waiting to burst.

The book focuses on the rent-seeking groups themselves, paralleled to “Vikings” given their interests to curtail competition, increase bureaucracy and hinder transparency in order to maximise their own profits. A sum of weak institutions coupled with strong and wealthy special interest groups, an inefficient judiciary and politicians who cooperate with the interest groups and get rewarded with long-standing careers and immunity enable such groups to operate successfully and results in economic bust. The system in a way perpetuates itself: those who do not cooperate are easily and quickly removed. Greece is a sum of semi-closed markets, including the political market, where corruption and nepotism prevail.

The book provides a basic literature review of political principles including the constitutional separation of powers in certain systems, such as the French, German and US and the Greek. Further, it discusses certain constitutional reforms. The authors also examine the justice system – the judiciary and the Rule of Law as an important component of the inefficiency of the system. The problem is a result of two shortcomings: bad laws; and laws that cannot be implemented. The final section of the book provides empirical analysis, placing Greece within a comparative context.

This book provides a good and honest account of the Greek economic crisis focusing on an issue that is both sensitive and critical: nepotism. At a time when elections are fast approaching, this book appears extremely relevant and topical. Its main argument addresses the problem at its core. However, the authors do not fully unpack the complex relationship between society, politics and economics as mediated through nepotism and corruption. This reveals the ‘chicken and egg’ circular logic of their argument: institutional reform can help solve the problem. However, reform can only be substantive if the embedded and deeply rooted clientelistic structures are dissolved. And clientelistic structures can only be dissolved through reform.

This conceptual confusion mainly derives from largely overlooking the social basis of corruption in an ever self-perpetuating system. At times, the authors appear to contradict themselves. Although they argue that Greek society as a whole is corrupt and nepotistic (page 11), they don’t fully examine the implications of this, assuming that corruption is more important at the elite level. It is unclear the rent-seeking groups are exactly and how- if at all- they are separate from society and other social groups. This is extremely relevant in terms of the extent of the constitutional dimension of the problem. Readers are compelled to ask why other systems with little or no separation of powers do not suffer from comparable problems- for example the UK which the authors hardly examine.

The authors conclude that only a determined effort to reform Greece’s weak and failing institutions and governance can resolve the economic problem. But one can’t help but wonder whether it is simply pointing to an unsolvable catch 22 situation that Greece finds itself in: in the context of a system in which reforms leading to strong institutions, governance and the Rule of Law are not in the best interest of rent-seeking predatory groups that dominate the social and political scene and mediate the relationship between markets, society and politics, how can this ever become possible?

Daphne Halikiopoulou is Fellow in Comparative Politics in LSE’s Department of Government. She obtained her PhD from the LSE in 2007. Her area of expertise is in comparative European politics, British politics and qualitative methodology. Her research focuses on the sociology of religion, nationalism and its relationship with the extreme right and extreme left, immigration and the criteria for inclusion in the nation. She is author of Patterns of Secularization: Church, state and Nation in Greece and the Republic of Ireland and Nationalism and Globalization: Conflicting or Complementary (co-edited with Sofia Vasilopoulou, forthcoming). 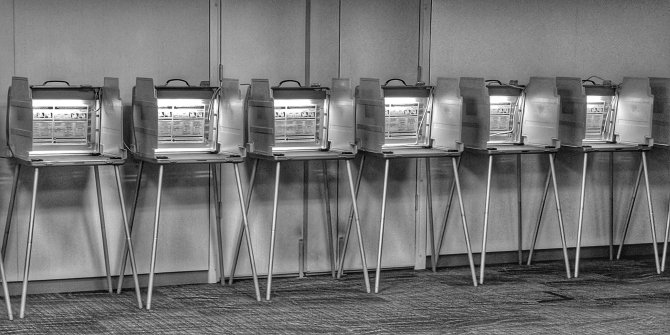