Which voting blocs supported François Hollande, and which supported Nicolas Sarkozy in the first round of the French presidential elections? As part of our continuing series on the French elections, Anne Corbett examines the data arguing that Hollande’s strong support among the young and middle-aged as well as the working class indicates that he will be next President of the French Republic.

In a few days we will know the name of the next French president. It will either be François Hollande or Nicolas Sarkozy. However, since the first round of the French presidential election last week, the European media has mainly focused on the strong performance of Marine Le Pen and her Front National (FN). This leads to a distorted picture of France. More than 30 million French voters did not vote for FN, and a considerable number of the 6 million who did are swing voters.

A third of the electorate did not vote for either the mainstream left or right: neither François Hollande, the Parti Socialiste politician, nor Nicolas Sarkozy, who rose from the ranks of the Union pour La majorité Populaire (UMP) to the presidency. How these voters now vote – or do not vote – will determine whether Hollande beats Sarkozy. In 2007 the then ebullient Sarkozy appealed to French voters across all age groups and professions. Today, this is true for Hollande. 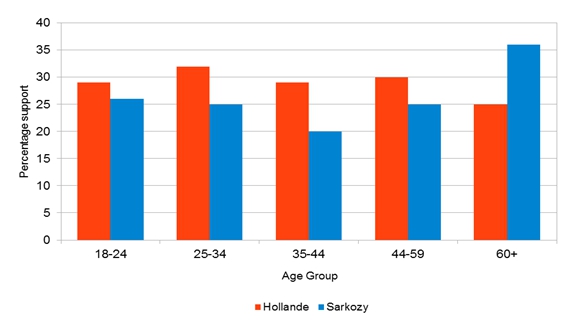 On the occupational vote (Figure 2 below), Sarkozy has held on the classic right wing loyalty of the shopkeepers and industrialists (40 per cent) and the retired (32 per cent) to Hollande’s 22 per cent and 29 per cent respectively, and level-pegged with him on the vote of the liberal professions and management (31 per cent). But Hollande was a clear winner with the lower middle class and working class vote (35 per cent middle management; 29 per cent employees and 28 per cent labourers).  This kind of spread is one that indicates victory for Hollande in the second round of voting this weekend.

Figure 2 – First round votes for Sarkozy and Hollande by occupation 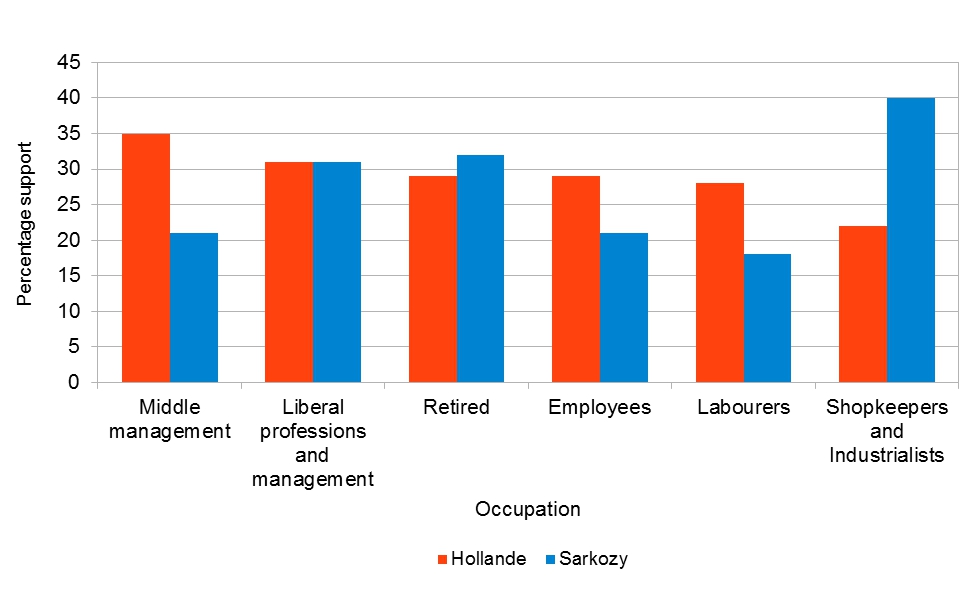 However, these national tallies ignore significant regional differences, which might prove to be crucial if abstention is a big factor. Voting in France remains cut in two by  party loyalties as much as by its weather. The dominant voting patterns north of the Loire and east of the Rhône are different from those in the south-west. The vote populaire is divided additionally between northern and southern blocks. In the 2012 first round the shopkeeper and artisan south gave the FN its highest scores (and no doubt future deputies). To the west of the Rhône it is the left which dominates. To the east, it is the hard right. The more industrialised or de-industrialised regions of the north, and Brittany to the west, have always been resistant to the extreme right. To the east, on the Belgian and German borders the FN has been entrenched since the 1980s.

A further and increasingly significant divide is between the big cities and the rest of France: the rural areas of la France profonde are more and more lining up with the distant suburbs and the economically stretched small towns, while the big cities continue to reject the FN. In the phrase of the demographer, Hervé Le Bras, the density and diversity of cities may explain more tolerant societies.

No doubt a factor to help Hollande’s campaigning, in the testing hours before the second round vote, is that the left controls all the biggest cities and 21 of the 22 French regions. As Patrick Le Galès of Sciences Po was saying last week at LSE in a Ralph Miliband debate, it means that if Hollande wins, he will have ministers with some very solid governing experience. In France, which is much more decentralised than we give it credit for, the territorial government manages almost 50 per cent of current expenditure and 75 per cent of investment.

But these are issues to be considered after the second round. Personally I shall be watching Wednesday’s debate of the presidential candidates with a special comparative interest. In 1981, the first French election debate I saw, François Mitterrand was up against Valéry Giscard d’Estaing, up till now the only presidential candidate under the Fifth Republic to have been defeated in a bid for a second term. The socialist contender, Mitterrand, used the occasion to make an inspiring commitment (which he kept) to ending capital punishment. In 2012 will Hollande see the occasion as one in which to show, in Le Galès’ witty phrase, what is left of the left?

Anne Corbett – LSE European Institute
Dr Anne Corbett is a Visiting Fellow in the European Institute of the London School of Economics and Political Science. She is the author of Universities and the Europe of Knowledge: Ideas, Institutions and Policy Entrepreneurship in European Union Higher Education, 1955-2005, Basingstoke, Palgrave (2005); and formerly a journalist in France (1975 – 1995).