Over recent years, many commentators have portrayed the EU as undemocratic and elitist, but is this really the case? Looking at 30 years’ worth of legislative output and the public’s support for the EU, Jørgen Bølstad argues that politicians have tried to please their electorates on the European level. However, in the wake of the European economic and financial crisis, pleasing electorates is harder than ever.

While commentators have long lamented the “democratic deficit” in the European Union (EU), they now also present democracy as a major threat to the survival of the Euro. As dissatisfaction is mounting, it seems the system would more likely survive if it could keep the “public mood” at bay. But is the EU really the undemocratic elite project it is portrayed to be?

An alternative theory is that politicians do in fact respond to public moods, trying to keep the public satisfied. In this view, public disinterest is a signal that politicians succeed at keeping citizens broadly satisfied, while politicians straying too far off from public opinion would generate dissatisfaction. Recent research suggests European politicians have indeed been quite responsive to the wishes of the public. For example, Dimiter Toshkov, an Assistant Professor at Leiden University, has found a strikingly clear relationship between public opinion and European legislative output in the period from 1973 to 2008. The figure below shows that legislative output has been much higher in periods where public support for integration has also been high. In addition, Toshkov finds that changes in public opinion take place before changes in legislative outputs, supporting the notion that the first cause the latter, rather than vice versa. 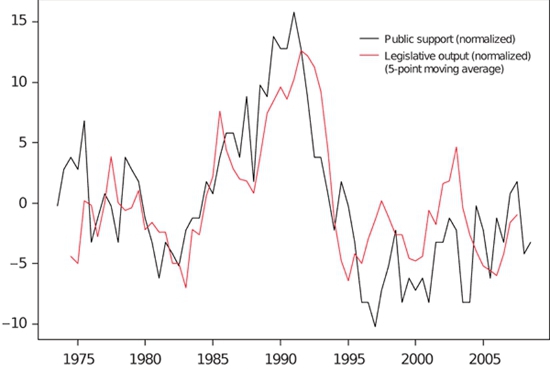 However, there are always caveats in academic research. An alternative interpretation of the figure is that politicians “cue” the public, or, in more favorable terms: They actually serve as leaders. Such an influence might be exerted well before legislation is finally passed, and thus be consistent with the identified pattern. Other research has found support for both these ideas, concluding that politicians both influence and are influenced by their supporters. This appears quite plausible; the idea of European integration was hardly forced upon politicians by citizens acting as policy-entrepreneurs, but citizens do appear to have bought the idea once it was there.

A further complication regards how we measure what the public wants. Research on responsiveness to public opinion has mostly used survey questions asking whether citizens want “more” or “less” of a given policy, thus capturing preferences “relative” to current policy. These are theoretically different from “absolute” preferences, referring to a given level of policy that would make citizens satisfied. Changes in policy should have no effect on absolute preferences, as citizens should still prefer the same level of policy. However, if we look at relative preferences, “more” policy should have a negative effect on these, reducing the calls for even more of the same. For relative preferences on integration, this effect would have the opposite direction of the “political leadership” hypothesis, adding a challenge in identifying the possible influence of politicians on the public. Interpreting the presence or absence of such an effect is further complicated by the fact that it is often unclear whether researchers are capturing absolute or relative preferences, thus obscuring our expectations.

Still, if we are interested in assessing the extent of democratic representation in the European integration process, these issues are of secondary importance. The main point is that there exists a strong relationship between public preferences and what politicians do. This point has been lost on most commentators, who have too long focused on institutional structures instead of actual political behavior. The fact of the matter is that politicians appear to have been acting in broad agreement with the public, even in the absence of institutions holding them directly accountable. Whether politicians were mostly leading or following the public is an interesting question, but it does not change the larger picture. Perhaps it would be best if they did both: Acted as leaders, but implemented their ideas only insofar as they succeeded in convincing the public.

A reason for concern, however, is that politicians and citizens appear to have drifted apart as the EU has grown more integrated. The relationship between public opinion and integration efforts seems to disappear sometime during the 1990s, after the Maastricht treaty. Ironically, EU’s institutional structure was made more “democratic” in the same period. Perhaps the integration process simply reached a level at which citizens think it is enough and are harder to convince. Whether this is true or not, the current economic crisis seems to strain public support more than ever. The good news is that politicians do try to please their electorates. The bad news is that those electorates are now at odds even with each other.