After a shock victory in Serbia, Tomislav Nikolic now faces a dilemma over Kosovo and EU accession.

Last Sunday’s presidential elections in Serbia saw a surprise win by opposition leader Tomislav Nikolic, of the right-leaning Serbia Progressive Party. James Ker-Lindsay argues that Nikolic will not be able to ignore the issue of Kosovo during his term as the EU is very likely to push Serbia to resolve its differences with Pristina for it to be able to continue down the path towards accession.

The shock win by Tomislav Nikolic, the leader of the Serbian Progressive Party, in Sunday’s presidential run off vote has sparked considerable debate about the future of Serbia. For some observers, the victory is seen as proof that Serbia is once again shifting towards nationalism. There is no reason to believe that this is the case. The result of the election is not because Boris Tadic, the incumbent, has become more right-wing, as one prominent commentator suggested. Instead, it is a reflection of deep seated concerns within Serbia about the economic situation and the pervasive influence of corruption at all levels of society (It also seems to have been driven by the negative message but out by Tadic and his team). Fed up with the government’s inability to crack down on cronyism, many supporters of Tadic’s Democratic Party (DS), and other centre-left voters Tadic needed to stay in power, decided to stay at home and abstain from voting. In truth, foreign policy played almost no part in the presidential campaign, or the parliamentary elections held just a couple of weeks earlier. 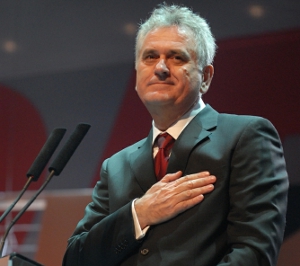 As well as a reflection of greater concerns over the economy, this apparent apathy over foreign policy issues is also shaped by the fact that, in the four years since Kosovo unilaterally declared independence from Serbia, most ordinary Serbs have come to terms with the effective loss of the province. Few now talk about it openly. Even fewer seek to make it a core issue of political debate. Again, this was reflected in the election campaigns. The only party now represented in the parliament that did so was the Democratic Party of Serbia (DSS), led by Vojislav Kostunica, which received just 7 per cent of the vote.

However, while Kosovo had sunk down the political agenda, it would be wrong to suggest that it no longer matters to ordinary Serbs. The reality is that, under certain circumstances, it still has the potential to affect public opinion in the country in a profound way. While most Serbs accept that it is gone, they still seem likely to oppose any decision by Belgrade to confirm this formally – at least not without gaining something significant in return (such as retaining formal sovereignty over the north and securing better rights over the Serbian Orthodox religious sites elsewhere in Kosovo). This means that the government still has to tread carefully on the matter.

The trouble is that while the incoming government would undoubtedly prefer simply to put Kosovo on the backburner, and avoid taking any major decisions on the issue, it will not have the luxury of being able to do so. It seems almost certain that as soon as a new administration is formed Serbia will once again come under considerable pressure from the European Union to restart the dialogue with Pristina, was put on hold during the election campaign. It also seems likely that the government will also be required to loosen its influence over the predominantly Serb inhabited north of Kosovo. If it does not make progress on these two issues, it seems unlikely that Serbia will be given a start date for formal accession talks. It is therefore vital that any new government tackles these two issues. The coalition talks that are just getting underway are therefore crucial.

Although the parliamentary elections, held a couple of weeks prior to the presidential run-off vote, were won by Nikolic’s Progressives, there has been widespread speculation that the eventual government will be made up of DS and their partners in the previous administration, the Socialist Party of Serbia (SPS). As far as the Kosovo issue is concerned (and setting other issues to one side), this is an ideal outcome for Nikolic. Under these conditions, he will have very little actual political power. Instead, he will be a figurehead president. This will allow him to avoid having to take any action on Kosovo, letting DS and its partners in the actual government take the blame for any further concessions, all the while giving him a platform to maintain the rhetoric that ‘Kosovo is Serbia’. From this perspective, he can only win.

Nikolic’s real problem would be if the DS decides not to form the government, and lets the Progressives do a deal with the Socialists, or if the Socialist actively opt to partner with the Progressives. Under this scenario, it is likely that Nikolic and the Progressives would come under an enormous degree of pressure from the EU. Having insisted that they have left their nationalism behind them, it seems almost certain that they would be expected to prove that this is the case by showing how moderate they can be over Kosovo. This would present a dilemma. If they give in to the EU, they will almost certainly face a backlash amongst their supporters. If they don’t, then it seems likely that Serbia’s further integration into the EU will be put on hold. This will almost certainly have an impact on Serbia’s image abroad, which could serve to inhibit the crucial foreign investment needed to tackle the dire economic situation. This would also harm their electoral prospects next time round.

Of course, there is one other scenario. As one analyst in Pristina suggested, with Nikolic as president, and the DS and SPS as the government, there is also the possibility that the way would be open for a historic settlement of the Kosovo issue, whereby all the parties would take responsibility for any decision reached. In many ways, this would be the ideal outcome. However, such an outcome seems unlikely given the fractious nature of Serbian politics. For the time being, it seems that Kosovo will remain as problematic for Serbia as it has always been.

James Ker-Lindsay – LSE European Institute
James Ker-Lindsay is a Senior Research Fellow at the London School of Economics and Political Science. A specialist on issues relating to conflict, peace and security, his authored books include Kosovo: The Path to Contested Statehood in the Balkans(2009), Crisis and Conciliation: A Year of Rapprochement between Greece and Turkey(2007), and EU Accession and UN Peacemaking in Cyprus (2005). He is the co-editor of The Cyprus Review.