Why is the discourse of extreme right parties so hard to characterize? Mapping Extreme Right Ideology proposes a new model of extreme right politics based on expressions of negative identity and authoritarianism. The model is comprehensively tested across 17 European political systems and 25 parties, using a textual analysis of party manifestos and press releases, a mass survey of voters, and interviews with leaders. Matthew Goodwin recommends the book to anyone looking for a sharper understanding of the role of party agency and supply-side dynamics in explaining extreme right party success. 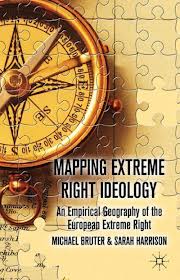 It could be argued that populist extremist parties in Europe are now faced with a perfect storm. Even before the onset of a global financial crisis, austerity and declining public faith in the competence of mainstream politicians, academics were charting rising public concern over immigration and hostility toward minorities, whether Roma communities in Central and Eastern Europe, or settled Muslims on the Western half of the continent. Far from passive, populist extremists have actively sought to capitalise amidst this environment: ideological appeals have been revised; toxic legacies have been downplayed; internal party structures have been strengthened; and cross-national co-operation within the extreme right family has accelerated, as parties from Sweden to Austria have searched for the ‘winning formula’.

But only some of these parties have encountered success. In Austria, the Freedom Party (FPÖ) has mobilised a stubbornly persistent electoral challenge and – according to recent polls – is the most popular movement among a new generation of 18-25 year olds. Yet in neighbouring Germany, the National Democratic Party (NPD) has found its representation restricted to state and local level, and is currently facing renewed attempts by authorities to ban the party altogether. In France, the Front National’s (FN) Marine Le Pen vindicated her father’s decision by rallying well over six million voters at the 2012 Presidential elections, yet across the Channel the BNP – which visited Paris in 1998 to learn from the FN model – has been thrown back into the electoral wilderness.

Attempts to explain this cross-national variation in support for the extreme right have produced a large and increasingly methodologically advanced academic literature. Searching for a convincing account, most studies now reject earlier approaches that focus only on structural and institutional factors. Instead, attention has shifted toward investigating the role of party agency. Whether investigating party organization, leadership, or ideology, most studies now share a consensus: understanding how socio-structural change has cultivated public demand for populist extremists is important, but ultimately it is the actions of the parties themselves that determine the extent to which they attract – and sustain – electoral success.

It is within this tradition that we find Mapping Extreme Right Ideology, a book that sets out to demonstrate how this large and diverse party family is mapped by various ideological positions espoused by the parties and also their voters, and how the match between the two determines the evolution of party ideology, patterns of party competition and dynamics of electoral success. Indeed, perhaps the central message is that – ideologically – the considerable variation that exists within this family is actually part of the essential nature of the extreme right. Contrary to popular claims and conventional wisdoms, these parties are not ‘puppets of the party system’, but rather are ‘capable of determining their own destiny with the strategic help and the right blend of discourse’. Furthermore, far from being a monolithic and unified concept, the European extreme right ‘constitutes a varied and complex multidimensional universe, with its tensions, hesitations, transformations, and challenges on how to match the preferences of parties, leaders, members, and potential voters over time’ (p.194)

Reflecting methodological advances in the wider literature, the book is anchored in an array of innovative data that include 92 interviews with extreme right elites from four parties (with only a few refusing to participate in the research), textual analysis of manifestoes and press releases, an ad hoc survey and aggregate-level electoral results. Clearly, and as I found in my own research, the authors’ decision to situate UKIP alongside the more toxic BNP will undoubtedly irritate many on the radical right fringe! All in all, the book rests on an impressive and ambitious 70-country, 25-party pan-European sample, with three more detailed case studies that include multiple extreme right parties (Britain, France and Germany).

One of the most fascinating aspects of the book is the examination of internal party competition, namely party systems that host more than one extreme right party. With the exception of some excellent work by Veugelers and others on the internecine rivalry that characterised the extreme right in 1970s France, the area of competition within the extreme right remains under-researched (though is clearly salient given the increasing fragmentation of the extreme right in Britain, as only one example). The finding? It is perfectly possible for different and competing parties (e.g. the BNP and UKIP) to co-exist and each be relatively successful, but only so long as they occupy a different space within the ideological quadrant of the extreme right. Where they stand in the same ideological quadrant, it will likely be the party with older roots and pre-existing links with voters that will triumph. Another interesting though perhaps unsurprising finding concerns the discourse of the extreme right. Rather than static, there is considerable cyclical change, with populist references coming to the fore during electoral campaigns, and then being usurped by xenophobic appeals during non-campaign periods.

As a convenor of an undergraduate third-year module on the extreme right in established Western democracies, I would recommend this work to undergraduate and postgraduate students, as well as academics working in the area who – with an eye to a obtaining a sharper understanding of the role of party agency and supply-side dynamics in explaining extreme right party success – want to build on the past and influential studies of Elisabeth Carter, Cas Mudde and Wouter van der Brug, among others.

Matthew Goodwin is a Lecturer in the School of Politics and International Relations at the University of Nottingham. Matthew is a leading expert on extremism and its support. His research has included a major study of right-wing extremist activists based on extensive ‘life history’ interviews, articles on extreme right party voters and minor party voters, research reports on right-wing extremist violence and populist extremism across Europe. He is also undertaking work on the 2011 riots in England, the drivers of anti-Muslim prejudice and public attitudes toward immigration more generally.