With a falling budget, and chaotic administration, Austria’s development policy is in serious need of reform.

With a falling budget, and chaotic administration, Austria’s development policy is in serious need of reform.

Austria’s development policy is chaotic. Organized by eight ministries, and in the face of declining budgets, a mere 130 bureaucrats from the Austrian Development Agency (ADA) have the job of fostering change in more than a dozen countries all over the world. Dirk van den Boom assesses what needs to change to get the Austrian development community back on track.

Despite a long standing tradition in development assistance, Austrian official development assistance (ODA) has always been small in relationship to other donors of similar size. As Figure 1 illustrates, since 2007 – when Austrian ODA reached a peak of over $US1800 million in disbursements (mainly because of a considerable amount of forgiven debt, not because of an increased operational budget) – development’s budget share has dropped significantly. In 2010 only $US1200 million was disbursed, and in 2011, even worse, that level dropped to $US1100 million. Budgetary plans up until 2014 envisage further cuts. 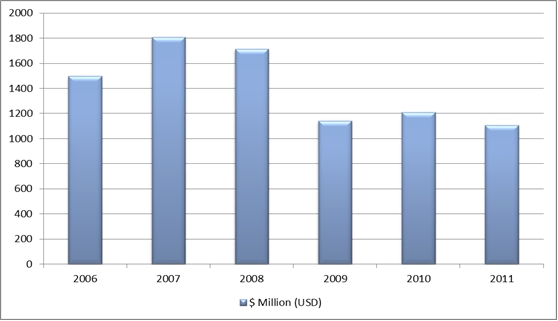 This negative culmination of diminishing resources has several reasons, among them the budgetary problems of Austria in general, but also the simple fact that despite a small, engaged and vocal “development community” in the country, this field has never enjoyed a large degree of public support and therefore could not mobilize the necessary forces to stop the decline.

While diminishing resources are one important feature to take into consideration, another one is the structure and sectorial spread of Austrian ODA: Not having a lot of money does not necessarily lead to the conclusion that quality in implementation is also missing. Indeed, Austrian ODA is quite focused on a small number of countries and it is trying to find areas of cooperation where it can excel in comparison to other donors. Partly, the selection of partner countries comes from its political history, like the traditionally close relationship to the Balkans, leading to its strong commitment to the former Yugoslavian states. Another selection criterion has been the fact that ODA has often followed the lead of early engagement of Austrian NGOs, for example in Nicaragua.

The major institution of Austrian ODA – the Austrian Development Agency (ADA) – does not implement projects by itself and works solely through tenders with money provided for NGOs, other state agencies or international service providers. Most recently, other considerations have come to the forefront, e. g. the demands of migration-policy. The opening of an ADA-office in the Republic of Georgia can be closely linked to the influx of a considerable amount of both legal and illegal immigrants from that country. Currently, Austrian ODA is concentrated on two “focus regions”, one in the South (Nicaragua, Burkina Faso, Uganda, Mozambique, Bhutan and the Palestinian Territories) and one in the East (Albania, Bosnia-Herzegovina, Kosovo, Macedonia, Montenegro, Serbia, Moldavia, Armenia and Georgia).

Sectorial spread of Austrian ODA has also increasingly been focussed on a limited number of areas. Among them support for Higher Education (where in some recipient countries Austria has for some years been the major bilateral donor) and Rural Development can be highlighted. This focus is somewhat diminished by the fact that more than half of Austrian ODA-disbursements are for multilateral assistance, with the share of bilateral aid consistently shrinking over the years.

The OECD’s Development Assistance Committee (DAC) peer-review-report of 1999 with its criticism of the organisational setup of Austrian ODA has caused a major structural reform of the sector, culminating in the formation of the ADA in 2004. ADA was supposed to be the organisational centrepiece of Austrian ODA, the focal point for both implementation (through tenders) and evaluation, with only the conceptual work residing in the responsible ministry (in Austria, development assistance is located in the Ministry for Foreign Affairs). Unfortunately, the reform process has since been stuck half way.

While ADA has been established, the responsibilities for ODA are still spread among different institutions. The 2009 DAC-review mentions ODA-relevant budgets in eight different ministries – with ADA and the Foreign Ministry being the only “main actors” in Austria’s aid system. While the Austrian government tries to streamline aid-activities by setting up three-year-programmes (with annual updates), the implementation and supervision of these programmes is hampered by the low degree of support ODA has in the Austrian polity as well as the fact that the responsible ministry does not exercise real power in order to implement its strategic advise among the scattered institutions involved.

While Austria is a signatory state of all major international agreements, implementation of important features, especially in regard to aid effectiveness or cross-cutting issues like gender rests on the shoulders of ADA. Burdened also with the oversight of all projects funded through bilateral aid, ADA with its relatively small staff (a total of 130 both in the headquarters in Vienna and in offices in partner countries) and somewhat vague position in the framework of Austria’s aid systems can only fulfil its role selectively. Having said this, ADA’s performance especially in the establishment of a strong evaluation unit with a considerable number of highly sophisticated and internationally comparable evaluation studies has to be highlighted.

In the current climate of budget austerity and an Austrian government in place with only a lacklustre interest in development assistance, The demise of the ODA-budget seems inevitable. Nevertheless, other actions can be taken in order to increase effectiveness, especially by creating synergies and diminish administrative overhead. The first and foremost issue is to fully implement and finalize the “stuck reform” of 2004, by making ADA the true focal point of the aid sector, by consolidation of a budget spread over too many actors and by putting power behind the three-year-programmes, so that they become more than mere political guidelines but tools of implementation, monitoring and evaluation of Austrian ODA as a whole.

Dirk van den Boom – University of Münster
Dirk van den Boom is a Professor of Political Science at the University of Münster, Germany. Van den Boom has consulted widely, including recently, for the Bertelsmann Foundation, the Konrad-Adenauer-Foundation, the Deutsche Gesellschaft für Internationale Zusammenarbeit,  the German Federal Ministry for Economic Cooperation and Development (BMZ) and the Dutch Foreign Ministry (Ministerie van Buitenlandse Zaken). He is mainly interested in development policy, migration policy as well as social-policy.

As questions abound about the monarchy’s role, Belgium’s new King Philippe must now convince the public of his legitimacy and credibility.

The blurring of the border between the mainstream right and far-right in France has helped to normalise the Front National.