Support is growing for a referendum on the UK’s membership of the European Union. Thomas Raines examines the demographics of British Euroscepticism and concludes that although some groups show strong support for the UK’s withdrawal, others, such as businesses, government, NGOs and the media oppose a referendum, and would vote to stay within the EU if one were held. In addition, the wording of any referendum question is crucial – leaving the EU is not the most popular option when voters are given a wider set of alternatives.

Next year will mark 40 years since Britain joined the European Economic Community but the odds on the UK remaining within the EU for another decade are lengthening fast. Momentum is building for a referendum on British membership. Driven by a core of deeply Eurosceptic Conservative MPs, a belligerent press, and a section of the electorate that views Brussels with open hostility, a referendum now has supporters from a variety of political colours and backgrounds, including some prominent pro-Europeans.

While the euro crisis seems likely to push the countries that use the euro – and probably those committed to joining it – into a full fiscal union, it appears to be exerting a centrifugal force on the UK. Lacking the ideological attachment to the post-war European integration project of other EU member states, the UK’s relationship with the EU has always been transactional: do the benefits outweigh the costs? With the European economy in such bad shape, and with the EU facing a political crisis as significant as its economic one, the advantages of membership are more difficult to articulate. Could Britain, so often an awkward partner in Europe, really walk away? The results of the recent Chatham House-YouGov Survey 2012* sketch the contours of a possible referendum campaign.

Euroscepticism by the numbers

Overall, the British public is strongly in favour of a referendum on membership of the EU. 57 per cent believe the government should commit to holding a referendum, with only 26 per cent opposed. There is also a near majority of support for a public plebiscite amongst voters from each of the three main parties, as shown in Figure 1 below. The survey makes clear the challenge facing any pro-Europe campaign.  If the referendum was announced tomorrow, a ‘yes’ campaign would start almost 20 points behind in the polls: almost half the country would currently vote to leave the EU.

Figure 1 – Support for an EU referendum by voting intention 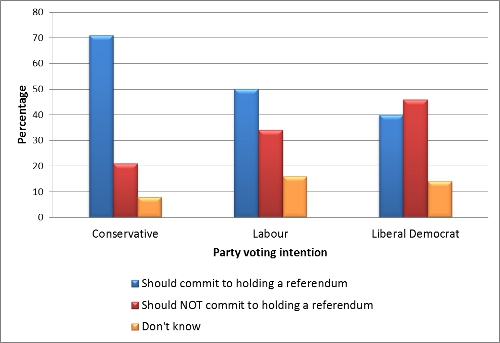 Euroscepticism has long been common in Britain. The poll demonstrates that the less common pro-European opinion is distributed unevenly around the country, as Figure 2 shows. Scots tend to be the most in favour of remaining in the EU. Voters there are almost evenly split – 40 per cent in favour, 41 per cent against, a statistical tie (a fact that could have implications for the other planned UK referendum, as the question of what Scotland’s potential position would be as an independent state is up for debate). The pattern of support for Europe does not correlate fully with traditional party political geography. The regions least supportive of EU membership are the Midlands and Wales. Although not traditionally Conservative leaning, voters there strongly favour leaving the EU, 52 per cent to 26 per cent, more than in London, the South or the North.

Figure 2 – How would you vote in a referendum on the UK’s membership of the European Union? (General Public) 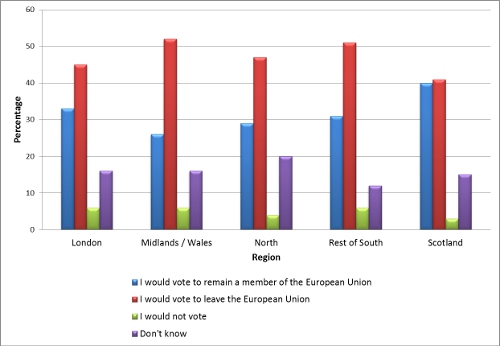 However, it is with age that opinion on Europe varies most widely. The only demographic group old enough to have been able to vote in Britain’s last referendum are predominantly Eurosceptic. Among Britons aged 60 and over, 61 per cent would vote to leave the EU, against just 28 per cent who support remaining in the Union. But among younger voters, the situation is completely reversed. More 18-24 year olds would vote to remain in the Union than leave (39 per cent to 29 per cent), although a higher proportion of this group is undecided. Could a ‘yes’ campaign mobilise a younger generation in support of a European future for Britain?

Our poll of opinion-formers – leaders from a range of sectors including business, government, NGOs and the media – reveals a British elite that diverges widely from the public. As Figure 3 illustrates, This group tends to oppose a referendum (53 per cent to 42 per cent), and if given a say on membership, a solid majority – 63 per cent – would vote to remain in the EU. Opinion-formers tend to think the UK’s closest ties should be to the EU, rather than the US or emerging economies like China or India, and they have a more balanced view of the benefits (they cite freedom to travel, free trade and peace and security) and costs (bureaucracy and a loss of national power) of membership.

Figure 3 – How would you vote in a referendum on the UK’s membership of the European Union? (Opinion-formers) 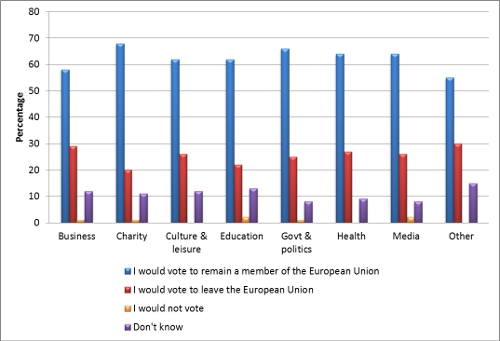 Does the UK have a European future?

The phrasing of any referendum question will be crucial, in particular whether the choices are wider than ‘leave’ or ‘stay’. The poll shows that, far from the EU founders’ vision of ‘ever closer union’, the public would prefer to draw back from Europe. But leaving is not the most popular choice. When presented with a broader range of options for future European integration than simply ‘in or out’, the most popular view among the public is for a looser confederation, more akin to a free trade area, rather than complete withdrawal.

A referendum that endorsed this view would create a political mandate for the British government – whatever its hue – to renegotiate terms with Brussels, with a view to repatriating powers. It is far from clear though what terms would be on offer to the UK. It seems unlikely that other EU states would be willing to allow the UK to maintain the benefits of access to the single market whilst opting out of other obligations and costs that come with membership. And even if such an offer were available, the UK would still be bound by a great deal of European regulation but with potentially less influence, perhaps even no say at all, over how that regulation is decided. In this situation, is Britain prepared to be Norway without the oil?

The original version of this article appears in the August/September edition of The World Today.

Thomas Raines – Chatham House
Thomas Raines coordinates the Europe Research Programme at Chatham House. Previously, he worked as an analyst in the Strategy Unit of the Foreign & Commonwealth office in London. He is the co-author of the Chatham House Report A Diplomatic Entrepreneur: Making the Most of the European External Action Service (2011), with Staffan Hemra and Richard Whitman. He has served on a number of election-monitoring missions with the OSCE. He studied history and political science at the University of Edinburgh and the University of Pennsylvania.