The European External Action Service (EEAS) is the new institutional arm of EU diplomacy. It is headed by the High Representative of the Union for Foreign Affairs and Security Policy (HR/VP), currently an office held by the Baroness Catherine Ashton. Nick Cherrier takes a close look at decision making in the Foreign Affairs Council from a game theory perspective. He argues the EEAS has the role of an efficient inter-State coordination instrument which also empowers the office of the High Representative through information gathering and agenda setting.

The motto ‘united in diversity’ is a perfect representation of a game where cooperation is possible despite diverging preferences. Throughout the years, the EU as a whole has shown an inability to act decisively in foreign policy. From the European Political Cooperation (EPC) to the Common Foreign and Security Policy (CFSP), the EU has consistently failed to meet expectations.  The Lisbon treaty which came into force in December 2009 announced the creation of the European External Action Service (EEAS) to move the EU forward in the field of foreign policy. The position of High Representative of the Union for Foreign Affairs and Security Policy (HR/VP) was created to head it, a role now filled by Baroness Catherine Ashton.

In order to evaluate the role of the HR/VP, and his/her potential influence on policy outcomes, I used a spatial model in two-dimensions that outlines the mechanics of decision making by unanimity votes in the Foreign Affairs Council. The status quo is the starting point. If an agreement is reached between all the member states’ representatives, the policy shifts to a new equilibrium.  If no agreement is reached, the status quo remains, a case best described as policy stability.

The area where the preferences of all member states’ representatives intertwine is the collective unanimity set. When moving from the status quo to a new equilibrium, the latter must necessarily be located within the collective unanimity winset of players due to the voting procedure; all must agree on the new status quo. Also, each player has an interest in advancing the agenda to the point within the unanimity winset which is closest to his optimal preference point. We acknowledge that weighting affects the chosen equilibrium point within the unanimity winset; that the threats of veto by some countries holds more weight than others.

Figure 1 – The importance of agenda setting under unanimity voting procedure 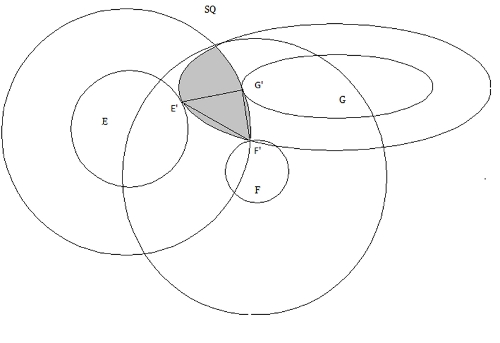 We can represent a negotiation between twenty seven Member States in the Council under the unanimity voting procedure by grouping them into three coalitions E,F and G, as shown in Figure 1 above. Their preferred equilibrium are represented as E’, F’ and G’. If the status quo is located within the E, F, G triangle or (Pareto winset), the outcome is agreement and policy stability. Any modification to this proposal would be disadvantageous to at least one other player; each player would face the choice of either keeping the status quo or accepting the new proposal.

While costs of obtaining information, forming coalitions and bargaining over policy are incurred during the negotiation process, the benefits of the policy are only gained after it has been adopted by the Council. Keeping the status quo once the costs have been incurred by the players puts all in a worst off position. If utility can be improved, even at the margin, players will be tempted to accept the new policy. Negotiations in council are subject to a time inconsistency.

Importance of agenda setting by the High Representative

Agenda setting is an important function in any negotiation. With twenty seven representatives involved, discussion becomes difficult between all players and information is costly. The agenda setter may lead the discussion and provide information at a relative low cost. This alone provides an agenda setter with substantive influence over the outcome of a negotiation. It is therefore surprising that the Commission has traditionally been reluctant to initiate proposals in the field of the CFSP.  With a functioning EEAS the HR/VP might find himself (herself) empowered.

The EEAS is set to benefit from a well-informed staff composed of national seconded diplomats from all 27 Member States, in addition to supranational staff. National governments need to choose between a low investment strategy where they know if the policy proposed is more or less advantageous than the status quo, or a high investment strategy where information is nearly complete  in order to attempt to swing the negotiation in their favour.  Secondly, they may accept or veto the policy proposal initiated by the HR/VP. The payoffs are different in each case.

Free-riding on low information is often the best strategy

Member States need to gauge the importance of the issue being debated in Council and only invest highly in the negotiation if two requirements are met: (1) The issue is one of national interest, and probably not sufficiently served by the agenda setter (2) Through coalition building, the concerned party is able to sway other coalitions away from the Status quo. If neither condition is met, States’ optimal strategy would be to free ride.

Interestingly, the power of the agenda setter is greater when other players have low investments in a negotiation. They are more willing to accept a policy proposal when free riding, due to low transaction costs. In our example, the HR/VP finds himself (herself) empowered not only by initiating a proposal and driving the discussions, but also by the superior information provided by the EEAS. By having delegates of all twenty seven Member States within the bureaucracy, the EEAS has the ability to provide key advice at low costs. In its absence, each Member State would need to conduct 26 bilateral negotiations to get informed and bargain adequately. Through its ability to bring transaction costs down and empower the HR/VP as an ideal agenda setter within the Foreign Affairs Council, the EEAS has established itself as an efficient policy coordination instrument.

This article is based on Nick Cherrier’s article ‘EU Diplomacy at 27: United in Diversity?’ (2012) which can be de viewed here.

Nick Cherrier – Simon-Kucher & Partners
Nick is a consultant at Simon-Kucher & Partners, a global strategy and marketing consulting firm. He initially studied business and international relations at Bond University in Australia, before developing an interest in European affairs at the LSE and Sciences Po. He is the author of EU Diplomacy at 27: United in Diversity? (2012).

The advent of the European External Action Service means that governments need to start thinking in geostrategic terms in order to plan effective regional foreign policies.