In July, the European Parliament voted against the controversial Anti-Counterfeiting Trade Agreement (ACTA). The agreement, which sought to develop international standards for managing copyright infringements, had been strongly criticised on the basis that it would limit internet freedoms and reduce civil liberties. In an interview with EUROPP editor Chris Gilson, Dutch MEP Marietje Schaake, who has been called ‘Europe’s most wired politician’, discusses the rejection of ACTA, the potential for digital technology to enhance human rights, and how social media can bridge the gap between politicians and their constituents.

The opposition to ACTA within the European Parliament initially consisted of my political party and a few others. In July the agreement was rejected by a large majority in the EP’s plenary session. I believe the main reason why many members of the European Parliament changed their minds on this issue can be found in the relentless efforts of those of us who believe in the power of online freedom and freedom of speech. The popular movement forced MEPs to look more deeply into this technical agreement. The more they looked into it, the more they realised that while ACTA may have asked important questions, it did not provide the right answers.

Although internet freedom was a strong argument against ACTA, my main concern was the precedent that ACTA would have set on intellectual property rights management. Doing this through a multi-lateral trade agreement, in a parallel legislative procedure outside the scope of the World Trade Organization (WTO) or World Intellectual Property Organization, would have made much needed intellectual property rights reforms in Europe more difficult. 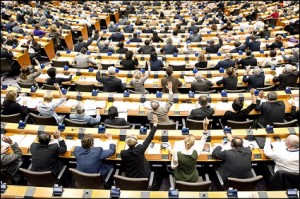 Finally, the effect of ACTA on counterfeit and dangerous products would have been minimal, since the countries where producers of counterfeit goods are produced, were not signatories of ACTA. It is also no longer possible to treat tangible and scarce goods in the same way as digital content which exists in abundance and can be shared at virtually no cost. Digital content is almost impossible to ‘seize’ by customs authorities for example, and not without violating people’s fundamental freedoms.

Now that we are at a point in time that we can look back at how decision making was influenced by a diverse lobby against ACTA, it is important to also identify lessons to be learned. Some organisations seemed confused about the nature of ACTA, and the negotiations in secret led to speculation based on leaked but also outdated versions of the agreement. To inform people, I reached out to this grassroots movement, through a blog post on Reddit, by organising a public hearing in the European Parliament and by initiating public input into the draft process of an alternative resolution on ACTA.

I hope in the future an effective and dynamic and transparent process between citizens and politicians can develop. This can make politicians more aware of the importance of digital freedoms and citizens aware of ways in which European decision making works and how they can influence it.

In a recent discussion paper, you said that “the struggle for human rights has moved online”. In the wake of the Arab Spring, how can the EU use digital technologies to work towards improving human rights in the European neighbourhood?

The internet is a catalyst for increased freedom of speech, association and access to information, which in turn are conditions for many other human rights. As such, the mere existence of the internet has the potential to improve human rights in the European neighbourhood and beyond. We only need to look at the way Egyptians assembled on social media around the violent death of one man – a movement that kicked off the ousting of a thirty year long dictatorship – to see this idea in action. However, these developments are based on an essential characteristic of the internet: its free and open character. In order to be able to continue to advance human rights online, digital freedoms and a multi-stakeholder approach to internet governance need to be prioritised in all EU policies, throughout all of its branches. I am currently writing the first strategy for digital freedom in the EU’s foreign policies.

While there are many ways in which digital technologies impact human rights, some of which I mention in my discussion paper on a digital freedom strategy in EU foreign policy, I would like to briefly highlight sophisticated technology systems that are custom made for targeted human rights violations. These systems do not differ from traditionally banned torture tools or (parts of) weapons of mass destruction in their impact and should be categorized as ‘single use’ technologies. The European Commission should have the powers and tools to monitor the proper implementation of restrictions on the export of these technologies.

Recently, you called on the European Commission and the US government to launch free trade negotiations. How do you think Europe can use free trade agreements with the US and other countries (for example, in South America) to promote economic growth?

EU countries are struggling to create jobs and growth for their citizens so we need to find new ways to stimulate our economy. Key to this is to conclude free trade agreements with major developed and emerging economies. The USA is the EU’s largest trade partner. If we can remove the remaining import tariffs, break-down regulatory barriers and increase access for investment and services, this could be a game-changer for our economic future. By starting to remove trade barriers in the trade relationship with a long term trade partner, both our economies become more resilient in competing with emerging economies.

Furthermore, a transatlantic marketplace should comprehensively cover ICT products and services and standardisation in the IT sector. Restricted access for EU and US businesses to digital markets and online consumers through mass state censorship or restricted market-access for online service providers in third countries may even be considered protectionist measures and trade barriers at the WTO. Finally, Intellectual Property Right (IPR) reform should not be hampered by trade agreements. The focus of reforms should be on establishing a working copyright system for today’s age, aimed at stimulating innovation and creation. Europe desperately needs to complete its single digital market. For that the current fragmented IPR system needs to be reformed and harmonized.

You have been named by the Wall Street Journal as “Europe’s most wired politician”, and more recently by Foreign Policy magazine as a “trailblazer in the EU parliament”. How do you think politicians should be using social media to connect with their constituents?

I would like to think it is a great opportunity for many politicians! For me using social media and technologies to interact with people all over the world is an integrated and essential part of my work, I can’t imagine working without connectivity.

We should all be a part of the education and inclusion process. Social media are often seen by politicians solely as an instrument to spread messages. However, in order to truly get people involved in the political decision-making process, both politicians and governments need to learn to relinquish some control in favour of increased participation and influence of the public. To achieve such a culture change governments and European institutions should strive for more openness, transparency and collaboration with the public. It would help politicians a great deal if the institutions they work within would facilitate openness and collaboration through open data and through developing infrastructures that allow for the inclusion of the input of citizens in our decision making process.

Given the current economic turmoil in the Eurozone, do you think the euro will still be around in its present form in 5 years?

The current economic situation calls for measures to stabilise the European economy. Simply abandoning the euro, as some politicians easily suggest in campaign speeches, would be too costly for the entire Eurozone. Instead, we should strive to make the euro the foundation of further economic and political integration, while not turning a blind eye to the real issues to be resolved. It is therefore important that we focus on better European oversight over the financial sector. At the same time individual member states should be held to budget deficit rules.

These measures cannot be successful without a process of increasing political integration. This requires more democratic European institutions in which the European Parliament has a stronger say over the European budget. I consider a ‘United States of Europe’ as a point on the horizon.